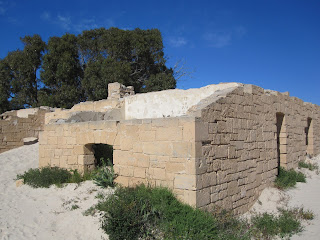 Old Telegraph Station at Eucla
West to East across Australia

After a great reunion with my daughter and her family in Perth, I headed across the Nullabor again. Won’t bore you too much with the details – just look at last year’s post “Across the Paddock.”  I didn’t stop to see the whales this time, but basically not much has changed there in several thousand years. 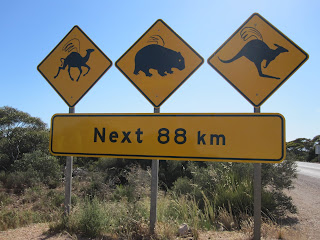 See how the wombat is drawn larger than the camel. That's why I was expecting to meet Muttaburrasauraui - the giant mammals that used to inhabit the place. 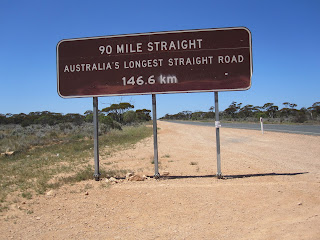 I am surprised that only 90 miles got a mention. It was more like 2000!
Because it was daylight this time when I came through, I did see this road’s  only hill which I missed last time and also called in at Eucla where the old telegraph station still stands though it is slowly being covered by drifting sands. No one appreciates now what a tremendous achievement that was in 1872.
http://en.wikipedia.org/wiki/Australian_Overland_Telegraph_Line
when it connected Australia with the rest of the world or how difficult it must have been without roads, air con and regular deliveries of food.* Eyre camped here too in about 1840 -41, when he travelled through to Albany in the West, the first white person to do so and the highway bears his name.  Saw my first snake here in years – going fortunately, not coming, as I only had my sandals on. 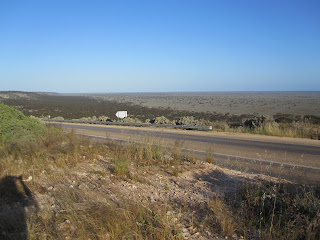 View from the Hill at Mandura
I also took a slightly different route after Port Augusta, travelling via Broken Hill which although longer, was much faster because there was almost no traffic and it was dead straight and flat. My car likes that.  I tell a lie, there’s one hill here too – a row of them actually -the Flinders Ranges which had always been stark and terrible whenever we came through while working at Mt. Gunson. Now they were softly fuzzed with green and  little drifts of purple –Patterson’s Curse – a noxious weed, but  a very pretty sight. 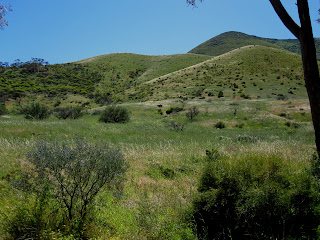 Even the Flinder's Ranges were green and flushed with patches of purple
Going down the other side the grass was tall, the dams were full and the farmers were smiling for the first time in years.  After Peterborough it was back to saltbush flats and places named after tanks  or with names like  Walkhungry Road and Dismal Creek, so it gives you an idea what it’s like the rest of the time.  It’s grazing land – about 1 cow per several thousand acres, though what they would find to eat, beats me, especially after eight years of drought. It had obviously rained recently  and now it looked quite pretty with all kinds of  prickly things in different colours making it look like a coral garden or rockery. 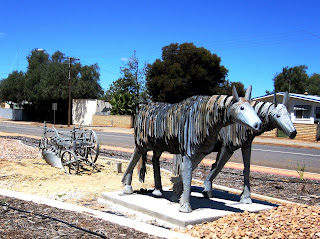 You do pick up interesting snippets of information here and there. Until I came this way, I had no idea that Orroroo was the home of the stump -jump plough which revolutionised farming in the outback because you no longer had to spend weeks trying to grub out tree roots.  This meant a farmer could plough 3 hectares a day. Today's machines do that area in 15 minutes 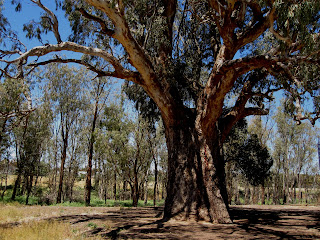 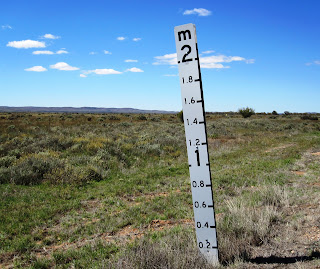 Typical landscape heading north. It does rain sometimes but it is so flat that then it usually floods.
Battle Scarred Survivor
Broken Hill, the Silver City, was Australia’s richest mining area for almost a hundred years and the Company that owned it, BHP, was the biggest in Australia. It’s been a bit down on it’s luck in recent years, but the signs of past glory are there – grand buildings, lots of pubs – 60 in 1906, long main street with wide verandahs, as was the pattern throughout outback Australia. There are lots of stories here too, about the 400 women who took to strike breakers with mops and brooms and how the miners slowly won better conditions through the creation of unions.  The cemetery, which is absolutely enormous, tells the story of how it was in the early days and is typical of mining towns everywhere  -early death through accident and lung disease, women dying in childbirth, also young children of epidemics that swept through. Every gravestone tells a story. 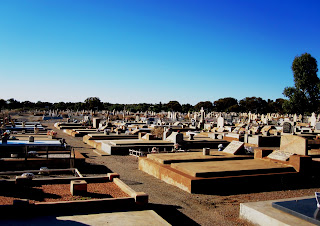 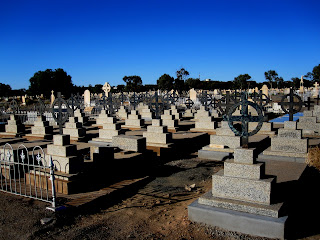 The Sisters of Mercy were well represented 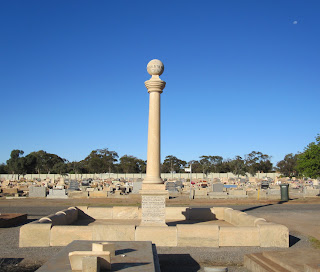 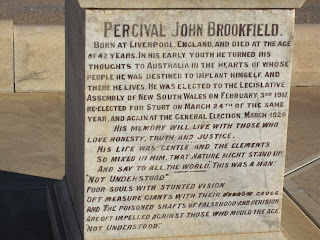 As the Cemetery's brochure says, you can read a town's history in its cemetery. Artist, local -boy -made -good, Pro Hart , doesn't get a mention but is also buried here and so are members of the original BHP syndicate and members of the famous Kidman dynasty. 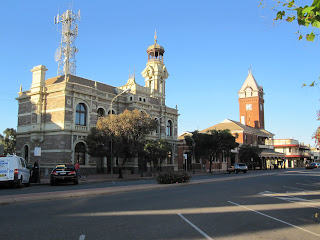 Late afternoon in the Silver City
I stopped for a meal here at one of the clubs – a New South Wales institution. The meals are enormous and cheap because they are subsidised by income from the poker machines. Then it was on through the Mallee. 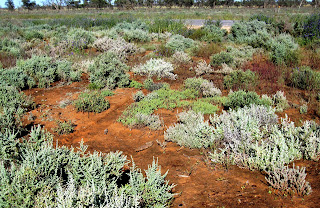 Even the Mallee looked greenish
Just Add Water
The last time I had driven through the Mallee in about the late 70’s it was dry and there was a mouse plague on and I had nightmares for weeks about their soft little bodies going squelch, squelch, squelch under the wheels  and when I stopped at night, I dreamed that mice were winding down the car windows and were going to devour me in my sleep.
This time the Mallee looked a picture. It had obviously rained here too. The fields were ablaze with purple and there were rabbits bounding everywhere.  The reality though is different and explains why quarantine laws are so strict in Australia.  The purple is not lavender – it’s variously called Salvation Jane, Patterson’s Curse or the Riverina Bluebell. Because it and the rabbits are introduced and have no natural enemies here, they take over everything and destroy large areas of productive land. Until myxomotosis was introduced,  rabbits ruined many a farmer in Australia, especially in marginal lands like these.
http://members.iinet.net.au/~oseagram/eucla.html If you want to read about life at Eucla* and how bad the rabbit plagues were. There are excellent photos on this website of how it used to be. 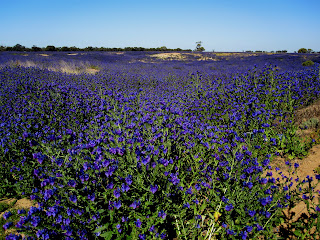 This is not Lavender 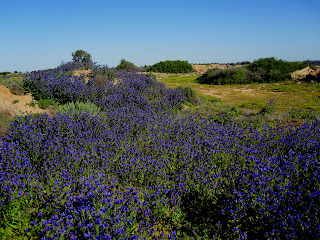 Double click on this picture and you will see little brown rabbits bounding everywhere. Very cute but... 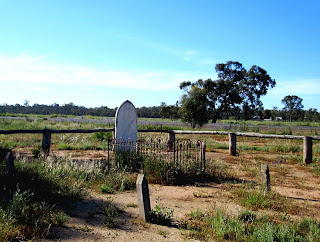 Lonely graves are not uncommon in the Aussie Bush 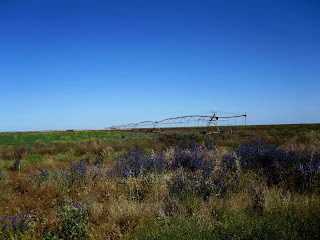 The Miracle of Irrigation
After crossing the Darling I was in the the Riverina which used to be the fruit bowl of Australia and still grows its share of oranges, avocadoes and grapes, but what grows here is mostly a technological miracle made possible by irrigation. Though it has worked well for past generations, it raises the water table and causes salt to rise to the surface making the land infertile. It also degrades the water quality – in dry years there are toxic algal blooms -and deprives other species of the river's natural flow (for example, many of the big ancient river red gums are dying and occasionally there’s a fish kill). For this reason, water permits are issued now which are supposed to cap water use at ecologically sustainable levels. This means winners and losers, with yet more farmers leaving the land and more country towns losing business.  I do have a good news story about this coming up shortly so don’t get too depressed. 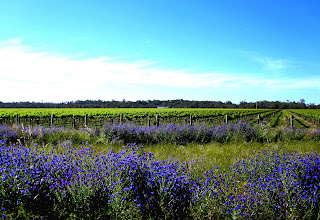 Meanwhile it had rained here too – saw another snake on the road ( that's 200% more than I have seen in 20 years), and everything was looking great – naturally.  I was very pleased to able to buy fruit again as I hadn’t had any since Ceduna. Having been caught last time at each state border and having to give up bags of oranges not once, but twice, I had stewed up all my apples and eaten everything else and was determined not to buy any again until I was safely in New South Wales. 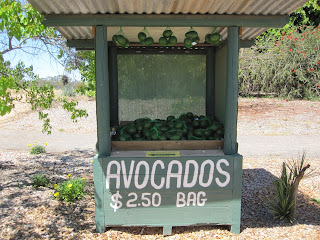 This highway was narrow, all double lines, windy and very busy with trucks that made my little van shudder all over as they roared past,  so I stopped at this little billabong and then turned inland and headed for Canberra via Griffiths. 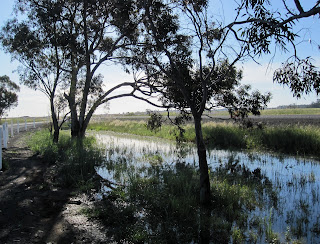 This little billabong was teeming with frogs and crickets. Snakes just love frogs. 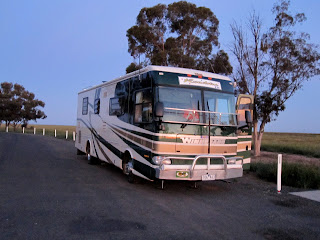 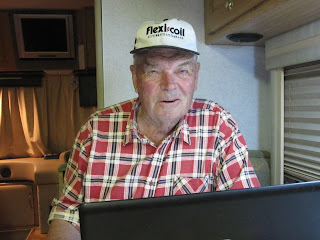 His bus had everything - full size stove, washing machine, toilet, shower, television, two fridges and diesel generators to keep it all going. I was green with envy until I found out that he only gets 4 km to the litre. And I thought my van was bad!

It was full moon that night and the crickets and frogs went absolutely crazy. Here's what it sounded like.
at December 08, 2010