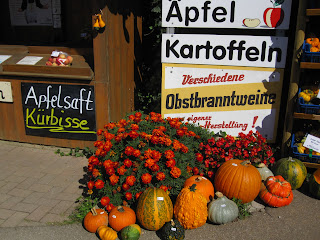 Signs of Autumn in Germany - Definitely time for this migratory bird to fly south!
It was a very long haul out of Budapest the next morning, ten to fifteen kilometres to the freeway at least, although one bus let me travel part of it for free and then came a long section of road under construction, where I was sure no sane person would ever give me a lift. They did eventually. Bris from Hungary pulled up although the traffic was moving very fast, and took me almost to the border with Austria, another place where I despaired of getting another lift, because there was absolutely nowhere to pull up. Sinishara, a Serbian, picked me up in his truck and took me to Passau which I  was sure was pretty close to where I had to go. As usual, each person I travelled with warned me about about travelling with everyone else. I suppose you get like that after centuries of being invaded by all and sundry.
Passau wasn't really that close, but my long suffering family picked me up and as usual stuffed me with wonderful food - a genuine Wiener schnitzel, pretzels etc., and I instantly regained all the weight that I had managed to lose on my two - minute noodle diet. They also insisted on putting me on the train to Germany so I wouldn't be too much of an embarrassment to the rest of the family and they wouldn't  worry themselves sick. 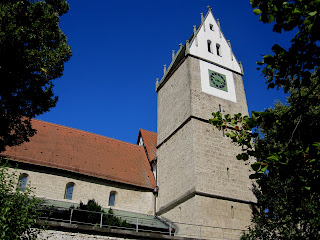 There was the same familiar scenery - old churches 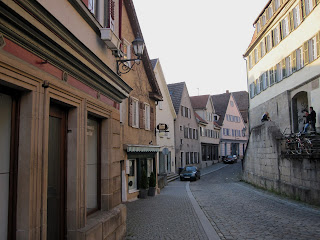 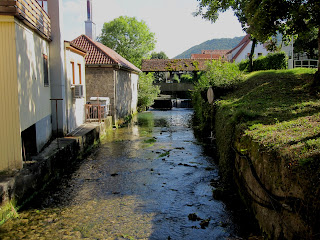 a millstream, and a castle or two 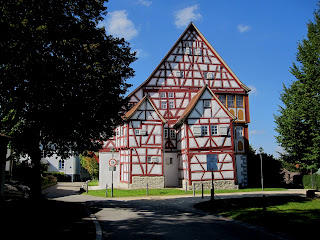 This castle is now a paper museum and no, I didn't realise it was one either at first 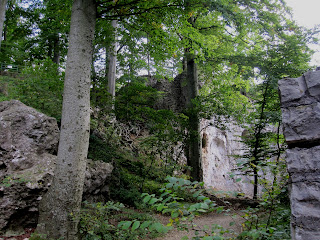 At Hoehen Neuffen, a castle I visited as a child 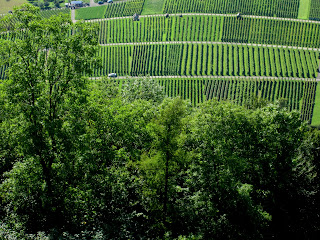 Views from the top of Hohen Neuffen.

[Sadly most of my photos from here didn't turn out well  as I took most of them in portrait instead of landscape and blogger spreads them out really strangely. Nor did the colours come out as brilliantly as they are in real life, but you'll get a general idea]. 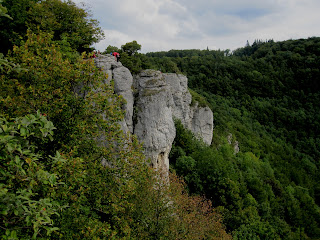 Another.....
It was lovely to see some familiar faces and places, but this time so many things had changed with the influx of people from elsewhere including many Russians and East Germans, not to mention all the guest workers from the generation before, that I felt that our places had long since been taken and hardly anyone remembered us any more. It reminded of a line I had read in a book review:

(Not that I have read the book "The Empty Family"  Colm Tolin, Picador)
".....about the lives of individuals cast adrift from their history..... about returning home, of family threads lost and rarely regained...about characters (who) have inevitably postponed their life's chances too long and are faced with 'a landscape of endings.''

(Thanks to Virginia Maxwell and the people at Fuller's Bookshop who wrote the 2010 Summer Reading Guide  for letting me use this - I do appreciate a a bookshop that serves decent coffee and i promise that next year I will come and buy a book!).


Fortunately, the people I did see, were very much alive and I was very glad that I had a chance to spend some time with them again. How strange it was, to be meeting up with people I had known as children, to find that they now had children as tall as I was. It was awful being the poor mendicant relative again, as I usually am by the time I get here, but that is the price of being a long distance traveller and it is an absolute miracle being able to come back at all.


I fear that it will be less possible in future. It is already less carefree now, knowing that the era of cheap fuel is almost over and that air travel contributes disproportionately to global warming, though less than everyone commuting by car and probably less than we use for electricity and heating and the production of endless material goods. (It was nice seeing all those wind turbines between Austria and Hungary, though that doesn't necessarily assuage my guilt).

I do think of myself rather like a pilgrim to some of the world's secular shrines - it's not about me, taking pretty pictures or having a good time. More like being some kind of witness to what is going on in the world and what good things we can learn from each other, but that's perhaps putting too noble a spin on things. I just like to explore new places. I used to wish I had been born a hundred years ago, thinking that everything had now been discovered, but it's not true. Whole countries and even empires have disappeared or changed hands since I was a child and even if I could travel for the rest of my days, I could never hope to see it all, much less penetrate far below the surface. On top of that each encounter, each experience, is unique - an accident of time and place in which history, the weather and people 's moods and personality play a role, one that can never be replicated or taken away. 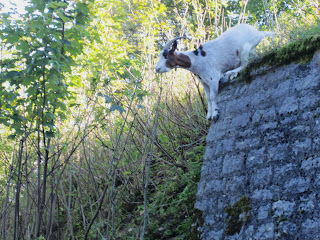 I could really identify with this goat at Hohen Neuffen- it didn't fall down either
I'm sorry if this all sounds a bit gloomy and introspective. I had a long time to reflect on it during the twenty four hour wait at Heathrow Airport and the long flight home. It was wonderful to see you all and I am very grateful to everyone who helped to make it possible.
at December 07, 2010