A little Bit(e) of Budapest 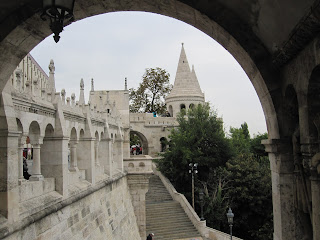 Fisherman's bastion seen from Buda Castle
Poor Budapest, like Tallin, almost everyone has a  had a try at taking it over - first the Romans in about 9 B.C. , then the Bulgarians in about 829 A.D, next the Mongols in the C13th and the Turks in 1541. Although an international force - the Holy League, took it back for the Christians in 1686, the city was completely destroyed and incorporated into the Hapsburg Empire. The city flourished during this period of peace and prosperity, and most of its grand buildings date from this era.
In 1918, when the Austria - Hungarian Empire lay in shambles, Hungary declared its Independence but its new government was immediately overthrown by the Romanian Army and the country was taken over by the Russians. In World War II, Budapest was occupied by the Germans and up to 40% of its large Jewish population perished. Towards the end, most of the city was destroyed by allied bombing. In 1949 it declared itself a communist republic but in 1956 minor demostrations were brutally crushed by Soviet forces and 3,000 people were killed. Until the thaw in the 1980s, things remained pretty quiet and many of its fine building, the Metro and the bridges have been restored and are now World Heritage Listed (Wikipedia). 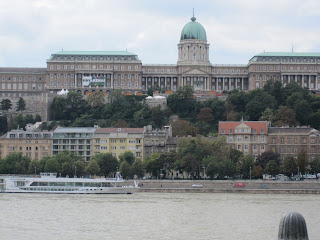 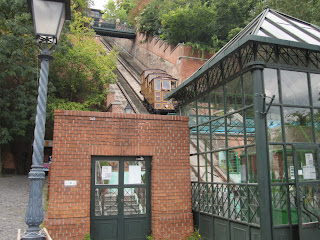 The way up to Buda castle was with this little ratchet wheel railway. Budapest was very advanced technologically and also had the first Metro in Europe. Nikola Tesla the father of the "Electric Revolution" made his home here until he moved to New York and teamed up with Edison and Westinghouse 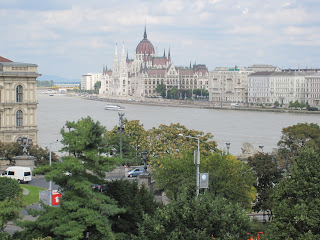 Pest and the Houses of Parliament as seen from Buda
Originally these were two towns, Buda with its Castle on the Western side of the Danube and Pest - the administrative and commercial centre on the other side (A splendid idea! What a shame they ruined it by building bridges). While  the buildings here have not all been restored  as well as in Vienna there is an air of  people making up with style what they lack in cash. It is a very creative place especially when it comes to fine art  - jewellery, ceramics, glass and fashion design and it is also rich in history and culture. 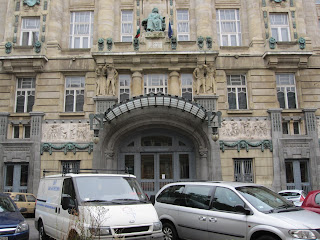 Liszt presides over the Liszt Academy of Music which dates from 1901
There are literally hundreds of museums here. As well as the usual suspects housed in stately buildings– A National Museum, an Ethnographic and at least one each for Military History and Sport, a National Gallery and the Ludwig Museum of Contemporary Art,  there are several  Jewish Museums  and many devoted to Hungary’s industrial past such as the Obuda Museum, The Electrical Engineering Museum,  The Foundry Museum,  Transport,  Railway and Underground Museums (Budapest’s underground was  the first one  in Europe, having been built 130 years ago)  and many other unusual ones such as the Semmelweiss  Museum of Medical History, The National Television Museum, The Ambulance Museum, The Fire Service Museum,  The Telephone Museum, The Postal Museum,  a  Pharmacy Museum  a Museum of Hungarian Commerce and Catering, Actors and  and Actresses, Crime, Geology, Flags -even one for Royal Wines, and they were just the ones I can remember.  Old manuscripts are revered too and there are whole areas devoted to antique bookshops and retro clothing. 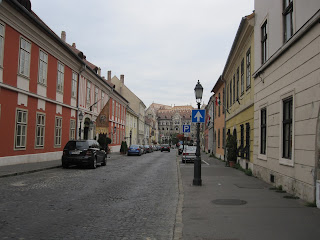 View of Obuda  - Old Town, near the castle 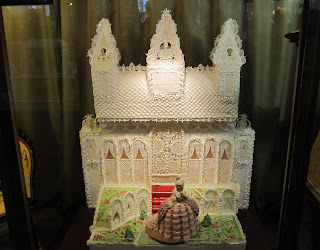 I confess to checking out the Marzipan Museum - some of the creations there took hundreds of person hours to complete - there are full sets of furniture, churches, bridges, and famous buildings, all made out of sweet almond paste.
This is also a café society. There were already 500 at the beginning of the C20th and now there are probably fifty times as many.  There are also wine bars, bakeries and ice cream parlours. You simply can’t escape! It is also a melting pot of several  different cultures – Turkish, Roman, Russian and Asiatic. The Mongols left their language -related to that of  Estonia and Mongolia, the Turks left fabulous baths in the hot springs under the city and the Austrians brought their architecture. It is a  place where things mix, coalesce, fall down and come together in new ways. Perhaps that is why there is so much emphasis on preserving the past, providing not only a sense of continuity, but also inspiration for things which haveyet to be created.
I found myself looking for the ephemeral – the Street Art (in the street), the theatre posters, small ads, clothes that people were wearing, the little courtyards and occasionally the shock of the new. 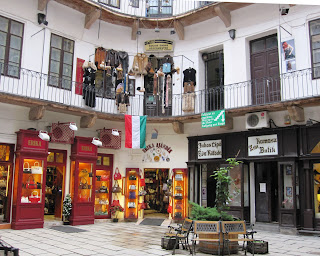 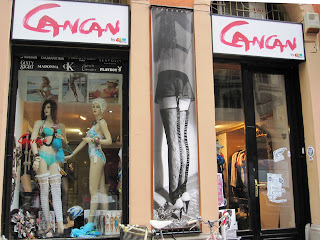 This was a dance shop 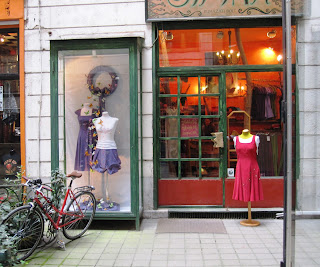 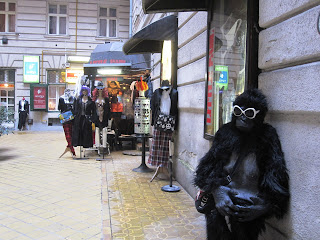 There were surprises around every corner
One of the trendiest shops takes your average St. Vinnies clothes and restyles them  - just sewing apparently random  t-shirts onto old frocks (and yes, they are frocks) but I like their verve, though there are plenty of brand name and  high end fashion shops too.
Music is big here too - though less headbanging and techno and more dance music based on folk and gypsy music. It also has its share of old rock stars - A craggy Jerry - Lee Lewis, looked down from a poster dated July 20th. and Mark Knopfler (ex Dire Straits) who has Hungarian roots, seems to call by often and Kiss and Motorhead front man Lemmy Kilmister, were here too.  In subways and restaurants  there are strains of soulful violins. 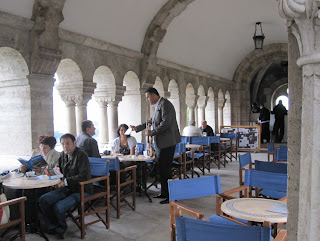 Violinist at the Fisherman's Bastion
There is also an enormous covered food market here though I didn't actually find it it until I was on my way back. I think this is where all the sausages went! There was plenty of Hungarian salami and pate, pastry - loved those cherry strudels!, wine, fruit and spices. There was excellent but expensive leatherwork, many  standard embroidered blouses in traditional designs and a few interesting odds and ends including  ex Soviet military gas masks and uniform items. That is,  I presume they were ex though the stallholder wasn’t keen on me taking photographs, but most things were fairly expensive  and none  of the stall holders would bargain.  I had an excellent glass of wine here, courtesy of a lovely American woman and some hot, rich goulasch soup* in one of the cafes which I chased down with exquisite icecream at one of the street stalls.
*There's a simple recipe for it here, if you want to try it yourself on some gloomy winter's day:
http://www.grouprecipes.com/54595/hungarian-goulash-soup.html 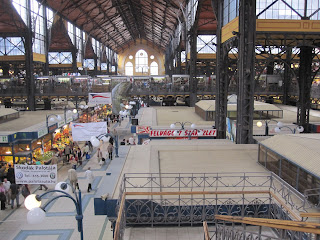 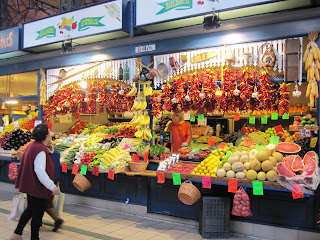 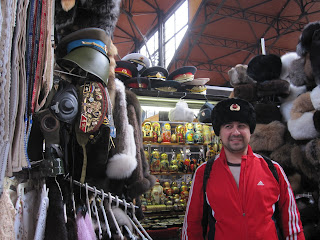 I wondered what would happen at Border Control if I took one of those gasmasks home as a souvenir. I already get stopped and checked for gunpowder every time I go through
As with Russia, I kept getting this feeling what a great tragedy it was that we had been kept apart from warm, intelligent people with an approximately similar cultural heritage for so long and I wondered what the world might be like now if so much wealth had not been expended on keeping us all apart and arming each side to the teeth, throughout the long years of the Cold War.


There were a few grey and gloomy days here, as you may  have noticed from the pictures and that seemed to have seeped into my soul. Though in many ways, Budapest was exactly my kind of city - a  bit scruffy around the edges, a bit intellectual and creative, - I felt strangely distant and disconnected. Maybe it was knowing that my adventures were coming to an end and thoughts of family and home were getting in the way. Either way, I took the train east and continued on to Romania." Be careful of those Romanians," everyone said, much as they had about the Russians before I went to Russia. I am pleased to report that those fears proved to be unfounded also, at least in this case.

*By the way folks, especially Russian readers, does anyone have a recipe for that excellent beetroot salad that used to be in Russian delis? It had carrot and little beans as well and I'm not sure what else. If so, would love to have it.
I did find one for borscht which wasn't at all like I imagined it would be:
http://www.ruscuisine.com/recipes/soups/n--52/

Maybe we should include the one for Icelandic Lamb Soup while we are at it, if any of you Icelander's  know your Mum's secret recipe, I'd be really keen to have it. Ask her first though!