Apologies to my International Readers and Students of Angleski, Let's hear from you!

I know this has been pretty boring for you, but this is the sort of stuff I write at home. I should have been down at the docks taking photos of the Wooden Boat Festival for which Hobart is famous, or maybe the Taste of Tasmania, another big Festival the week before, or just maybe I should have three blogs - one for international, one for national and one for local. Then again, it could be three different blogs - one for travel, one for inner journeys and random thoughts and one for book reviews. I am also thinking of letting it go public, instead of it being a private blog, as it has been.


So what do you think? It's about time I heard something from you. I am not even sure if the comments thing at the bottom of the blog works so give it a go because this is turning into such a one sided conversation. What did you like? What didn't you like? I'll try not to be too miffed. And what would you like to see more of?

I am writing generally about aging so I would love to hear your thoughts on this, and I am also thinking about the seventies and the influence they had and are still having on our lives. I mean who had ever heard of the environment before that? And are you recycling? Cycling?  I'd particularly like to hear from you if you were a former hippie. Maybe you are still one. Also from the Children of the Dream i.e. those whose parents had some kind of alternative lifestyle and what influence that had on you.

Meanwhile  I'll close with just a couple of glimpses of  Salamanca Market, where I usually do a mercy dash on Saturday mornings to get bread  and vegetables. It's raining solidly this morning, so I'll do this instead, and you' ll see that it's very international - Bratwuerste from Germany, Olliebollen from Holland, Persian and Asian Food and lots of Tasmanian delicacies too, like honey, cheeses, olives, oils, berries and wines. The Hmong grow most of the vegetables and there is usually a fine collection of antiques, clothes, handcrafts, toys, buskers and musicians too.

Music - This is Cary Lewincamp 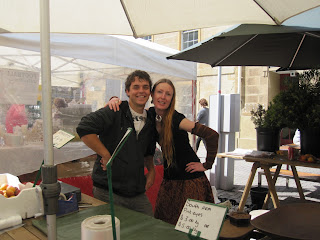 The South Americans
Cheers for now. I want to hear from you!
at February 19, 2011