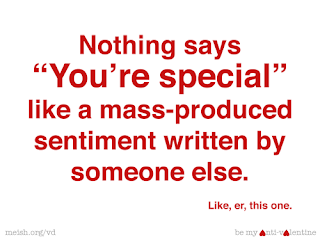 Meish has kindly given permission to use this on my blog. Click on her name for other wonderfully cynical thoughts and yes, I am using a mass -produced sentiment produced by someone else, but it did rather tickle my funny bone and that's very important these days.

I'm not even that against a bit of commercialism or even that the card is mass -produced and I also like celebrating the passing of the seasons and marking out special days that break up the routine and allow people to drop their masks (or put them on) for a short time, otherwise life gets pretty boring. What does bother me is when these rituals themselves become routine or fraught with expectations and obligations.

Valentine's Day has its origin in pre Christian times in the ancient Roman Festival of Lupercalia. Unmarried girls/ women put their names into a drum to be drawn by young men who then remained their partner until the following year's draw. Sounds like a great idea to me. We should bring it back immediately. I just read somewhere that loneliness is much worse for your health than smoking.

New York apparently does quite a few things on that theme. There are plenty of Anti -Valentine's Day Parties for the cynics and singles among us, like the Annual Anti Valentine's Day Vampire Ball where the undead can dance  till dawn, but one or two places take things a bit further. Last year one of the pubs had a type of lottery where males and females got half a playing card each and no couples were allowed. They also gave out roses and chocolates to all the ladies, but you didn't have to stay together for the rest of the year, probably not even for the rest of the night. For the truly disillusioned, the aptly named Amnesia Club, had an Ex -orcism, whereby people could bring along pictures of their ex. to stick on the dartboard.

The origins of the name St. Valentine's Day are not so jolly. The Roman Emperor Claudius thought married men were a dead loss in wartime, so he banned marriages, but a bishop called Valentine, probably Valentinius, continued to marry couples in secret, for which  he was subsequently beheaded in 269 AD. Being unable to get rid of these heathen customs, the Church then tried to substitute saints' names to be drawn out of the barrel on Valentine's Day, so that people would lead exemplary lives according to the saint they had drawn. Apparently this did not prove a huge success and the girls soon took back control of the barrel.

Using other people's sentiments to express one's feelings is an old custom too, with books of loving prose and verse for men to copy appearing as early as 1797, so I won't feel too bad about that either.

One custom that appears to have faded away even before the risk of catching herpes and laws against Workplace Harrassment is Kissing Friday. Kissing Friday used to fall on the Friday after Ash Wednesday and allowed any male to steal a kiss from one female before the austerities of Lent.  Of course we would want Equal Opportunity these days and very probably a medical certificate saying you are not going to catch anything, it would be nice to have the option. Ash Wednesday falls on the 9th of March this year. I looked it up.

Meanwhile, I'll be celebrating St. Valentine's with a pink drink of some kind - thought I 'd try making a Raspberry Bellini  (basically fruit juice - strain out the pips - with champagne or white wine), though I'm quite partial to Carrington Blush  as well,  and maybe a Cherry Ripe or a Pink Lady marzipan bar.

Cheers to all you other Lonely Hearts out there and may this year bring the One of your Dreams.


Stoppress: sat 12/2/2011. I have just found the purrfect pink drink. It's a strawberry champagne mixer. I don't have the champagne yet, but I am giving it a test run with mineral water. 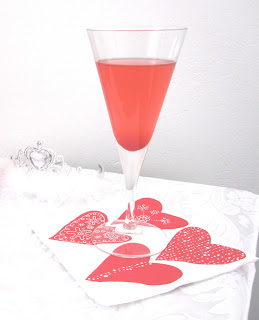