Just when you come to terms with the idea that you might not live forever, there is the horrible prospect that you might. Life expectancy keeps rising, yet the quality of life does not necessarily improve.
No, I am not planning to do myself in just yet, but there’s a big debate going on in Tasmania about Voluntary Euthanasia and another nationally about how we are going to pay for all those aging baby boomers when they all need care and are no longer tolerated at home. The favoured model looks like being a sort of reverse mortgage on the family home. This is a bit depressing since having spent the first two thirds of your life acquiring it, it seems that you only get to keep it for such a short time.
While my children have offered me accommodation so far, there’s every chance they’ll change their mind as I get older, crankier and more difficult to manage, so I am having a big think about how I want things done, while I am still capable, and I have taken out my Grade 6 school reports and my Certificate of Appreciation for Penguin Washing – enough of past glories  -in favour of that kind of information.


At this stage it is not legally possible to have assisted suicide in the event of a terminal illness, but after watching my mother die a slow and painful death, I will join this group to push for law reform in this regard.
3.       Nor have I yet ticked the box about Organ Donation, so it would be hypocritical of me to say that you should. Logically, rationally, it’s a good idea, but I am still a bit emotionally attached to them at this stage. However, it is a good time to talk about this with your nearest and dearest. The Week from Feb 20 to the 27th is Organ Donation Week and since in Australia at least, relatives must agree, this is a good time to make ones wishes known. 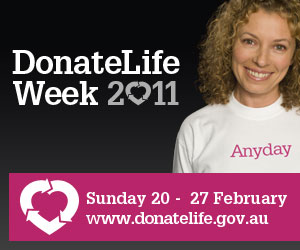 http://www.donatelife.gov.au/Decide/How-to-register.html
Note: you do have to register here, even if you have ticked that box on your licence, but you can pick the forms up at any Medicare Office.
That’s all the time I want to spend thinking about dying for now, but it is probably a good idea once in a while.
at February 15, 2011