Apologies for the break in transmission. I have just been mobbed by a whole galaxy of witches and goblins 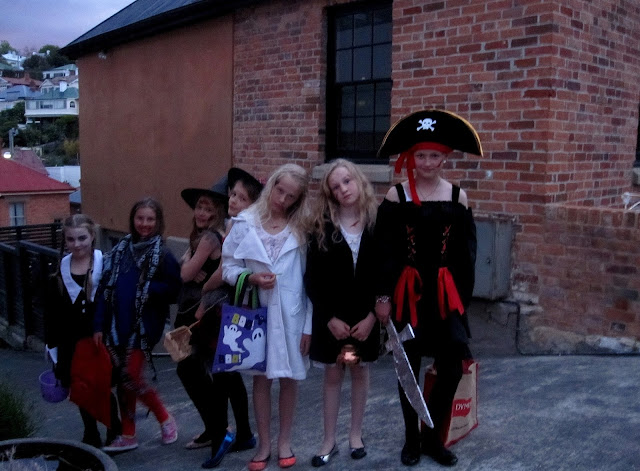 I forgot it was Halloween, the only occasion when I finally have the right clothes, the right hair and the right accessories, and I almost missed it.
My son did mention that he'd seen a lot of zombies around the town today, but I told him that I see them all the time and that they are mostly harmless unless you pull out their earplugs and shout at them.

Wonder what the trick would have been?
Luckily I had a stash of sour worms and some chocolate sovereigns left over from a pirate cake, so I never found out. Was that someone starting up a chainsaw though and was that Freddy getting ready to bound in?

I tricked or treated my neighbours. They gave me a chocolate first so I put on the costume I wore for Seven Deadly Sins last year - nice to give it another run . What is it that they say. It isn't what a garment costs, but the costs per wear. Only about 39 Halloweens to go.
May all your goblins be nice ones.
at October 31, 2015