I started early on Thursday. It was so cold that I wore gloves for the first half of the trip and wondered if I shouldn’t have worn my thermals. Sea birds wheeled and screeched while clouds the colour of bruises, were being whipped across the sky by a savage wind.


Hunched down and with my hands thrust deeply into my pockets, I walked the 4.3 Km from Howrah to Tranmere. Mostly the light was too poor to take pictures and when occasionally a fleeting patch of sun cast an unearthly spotlight upon some feature or other - Droughty Point never looked so good - my reflexes were too slow to capture it. I didn’t even get a photo of the two large ships which appeared to be mating in the river. Swinging around on their anchors, they first chased each other, then faced each other bow to bow as if they were communicating something deep and meaningful.Then they turned their backs upon one another like a long married couple. I could have invented a whole future for them if the weather had been a bit kinder. As it was, a bus trundled by just as I reached a bus stop at the far end of the walk and I hurried to catch it, glad to be out of the wind.


Somewhat refreshed and obviously a glutton for punishment, I drove to Lauderdale on that narrow isthmus which almost divides the South Arm Peninsula in two and started walking north on the other side towards Seven Mile Beach, reasoning that if the wind was blowing on the western shore, the eastern side should be more sheltered. This was almost true though it was jumper on, jumper off most of the way, proving the old Tasmanian adage – “Don’t like the weather? Don't worry. In five minutes there’ll be something else.”

The track first goes along the beach for two kilometres, then rises to Single Hill, passing by seats and a picnic spot or two and has superb views of Frederick Henry Bay. It is a place of panoramic seascapes and cloudscapes to which my camera does not do justice. There are not many shells but the sea does throw up treasures – sponges and bull kelp, huge black scallop shells, pewter and gold oyster shells, which dazzle like coins in the intermittent sunshine. Occasionally there are touches of Ming blue or hot pink. There are also a couple of unusual finds, some of which I have not yet been able to identify. 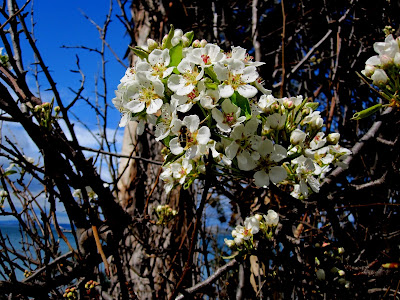 By the time I reached the great white arc of Seven Mile Beach, I was relieved to find another bus stop. I am always good at getting somewhere, but not always so excited about walking back. The bus when it finally came, only went a short distance to Acton Road before turning right and heading north rather than south towards Lauderdale. I had drunk all my water by this time and was disappointed to learn after waiting for a long time at another bus stop that looked as if it was going in that direction, that those buses no longer run, so it was a long walk almost to Roche’s Beach again. Luckily, a brave man did give me a lift at that stage and I was spared the last two Kilometres along the beach. I was very glad to see my forlorn looking car waiting in the picnic ground (I like to think it is pleased to see me too) and even more pleased to see my thermos. Having walked around 14 Km, I was also rather sure that I must have lost lots of weight. Alas, when I jumped on the scales at home, I weighed precisely one Kilogram more than I did yesterday.  Hope it's because I have gained muscle. It couldn't possibly have had anything to do with the excellent fish and chips I had at Rokeby.