On the Road to Narawntapu * - A bit of Beaconsfield

*Asbestos Ranges in old money for Tasmanians. The name was changed in 1986 because of fears about a possible relationship with asbestos. There is no asbestos in the Narawntapu National Park although small quantities of this and other minerals were mined nearby. Now this Park is named after the Aboriginal tribe which used to live there.
I was always rather curious about this vast area of apparently undeveloped land  in the heart of northern Tasmania, even more so after flying over it last week, that I came back to have a closer look. Would have done it last week but didn’t have my walking gear with me, so here I was coming back for another shot.

Good thing I waited. I encountered my first snake on this walk- sandals would have been a disaster and I was also caught out after dark, which made me very glad of my son’s second best state of the art headlamp. He doesn’t have as much need of it since he took up mountain biking and parenting.
Wished I’d paid a bit more attention though when he was showing me how to drive it. Tap it once and hold down x number of seconds and you get a spot light, hold longer or tap somewhere else and you might get red  flashing SOS’s. Anyway, I was lucky this time. Had light aplenty to walk 'home,' scare off predators, see wildlife and cook my dinner, though I must remember to stock up on batteries. Who knows how long those will last at that rate. With all the fancy gizmos it had, you’d think it would have some kind of meter like the computer saying “you have 50% battery left” or something.   A simple glow in the dark on- off button would suit me too. Then you could read the instructions. Perhaps that's what you get with top of the range.

I didn’t think I’d get any walking in that day because it started off grey and drizzly, with a howling wind that almost blew the van off the Batman Bridge, so I spent a bit of time exploring Beaconsfield, starting with the historic bakery. Delicious apple turnovers – so huge that the one I started  for  morning tea lasted for afternoon tea as well.  Being the last town I would see before the National Park, I also stocked up on food and fuel.  I don’t know why I found it so charming. Sure there’s history – relics from Tasmania’s first and richest Gold Rush and a more recent one, some interesting buildings, good amenities, friendly people, well -kept  parks,  big old trees, clean streets with a few extra flourishes like seats and planters in the  main street and there are lots  of stories.

Following the the gold strike there in 1869, Beaconsfield became the most populous city outside of Hobart and Launceston, with 53 companies working the field. By around 1900, all were consolidated  into the Tasmania Mine and by 1914, repeated flooding of the shaft led to its closure. With new owners and modern technology, the mine reopened in 1999 though "success was mixed." Then came the tragic accident on Tuesday, April 26, 2006, which claimed the life of one Larry King and trapped two other miners, Brant Webb and Todd Russell, almost one kilometre underground. It made headlines all around the world - I even heard about it in Korea (South) and help flooded in from all around Australia as well as the local community.
The two surviving miners were finally rescued after fifteen days and both a film "Beaconsfield" and a book followed.
In a nice little footnote, frontman of the Foo Fighters Dave Grohl, heard of the miners' request to have the band's music sent down on MP3 players, and sent a personal message via fax saying he'd like to meet them for a beer. Grohl's note read, in part, "Though I'm halfway around the world right now, my heart is with you both, and I want you to know that when you come home, there's two tickets to any Foos show, anywhere, and two cold beers waiting for yous. Deal?" In October 2006, one of the miners joined Grohl for a drink after a concert at the Sydney Opera House. Since then, Foo Fighters have written an instrumental tribute song called "Ballad of the Beaconsfield Miners" appearing on the album Echoes, Silence, Patience & Grace."
Nice one Mr. Grohl! Nifty tune too!

I didn’t visit the museum this time as I had been there on a previous trip, but I learned a great deal about the town by doing the "The Walk of Gold." I'll only mention a few things here to give you an idea of the town and the flavour of the times. Of the many pubs that existed in its heyday, only three remain and one of them "The Exchange Hotel," is now a private residence.
"The Exchange" became notorious for 'exchanging' money from a bank robbery and having its publican imprisoned in his own hotel, because the cells had not been finished yet. The signage tells of miners running the gaunlet of "porridge" - the five miles of muck that was Weld Street, between the hotels clutching beer bottles with candles and occasionally falling into deep holes, the only evidence being the disappearance of their light and the curses of their owners. Then there was Sister Gertrude who began the St. Francis Xavier school teaching astronomy, trigonometry, geometry, Latin Spanish and Greek, as well as being an excellent musician. The money for the quaint Holy Trinity Church across the way was raised with teas, concerts, socials, a dolls' stall, among other things.There is much more. I lke my history served up this way. It makes the place come alive.


Though some of the town's glory has faded now especially since the mine closed again in 2012,  along with some of the shops, the overall effect is one of welcome, unlike one or two other places I won’t mention, who have no idea about tourism. Retirees seem to have found it attractive too, as there are several new groups of villas as well. Indeed, it seems to me that the spirit of optimsim that has always driven miners remains. 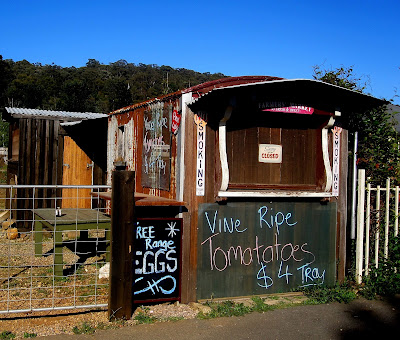