Get ready for some cliches.The views are to die for. The location would make a real estate agent drool and the neighbours are very, very quiet. I am at Hobart's main cemetery set on a little promontory overlooking the water, just a bay or two from the CBD. Begun in 1872, on what was formerly the government farm, it is the final resting place of some 100,000 souls, including some relocated from inner city cemeteries when these became overcrowded and a health hazard. 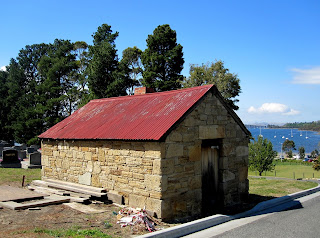 The blacksmith's shop- last relic from Cornelian Bay's days as the government farm.
It still works too

There they lie – the rich and the poor, the brave and cowardly, the paragons of virtue and the scoundrels and thieves, though you wouldn't necessarily know which was which from looking at the headstones. Death claims them all regardless. Even old enemies lie at peace  - Jews and Gentiles, Croats and Serbs, Russians and Americans, Greeks, Italians, Germans, Frenchmen, Poles, Yugoslavs, Lithuanians, the occasional Chinese and of course the Irish, the English and the Scots and that’s without even trying. The Cornelian Bay Cemetery has to be one of the most multicultural places on earth, much of it long before it became a buzzword. I had no idea that we had such a large Russian population,  dead or alive, or that there were enough Jewish emigres even among the convicts, to merit their own Chapel and Temple. 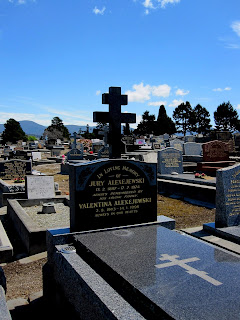 The double cross of the Russian Orthodox Church features prominently

Millington's who now manage this and other cemeteries, have kindly sent me a map pointing out some of the more important structures and monuments. It reads like a who's who of early Hobart - the people who have lent their names to our streets and buildings and are remembered in our stories.
Here for instance, lies our old friend, Martin Cash the bushranger – undoubtedly among the few in his profession to have died of old age. Here is the French memorial for those who perished at sea, there is the grave of The Blundstone family who arrived in Hobart in 1870 to begin their internationally renown  footwear enterprise.

Up the hill in the Anglican section is that of (Sir) Henry Jones "the Knight of the Jam Tin" whose jam  factory also became an international brand and lives on as the Henry Jones Art Hotel, one of the best addresses in town. A little further on lies Peter De Graves, ship builder, engineer, sawmiller and occasional inmate of debtor's prison who began the Cascade Brewery, still the oldest in Australia, in 1832.  He was also instrumental in establishing Hobart's fabulous Theatre Royal, also the oldest in Australia.  Then there are the big landholders, such as the Ashbolts, the Lords, Fosters and Camerons.

David Lord became a foundation member of the Van Dieman's Land Bank, although his father had come to Australia as a convict. (Sir) Alfred Henry Ashbolt  started out as an accountant but on becoming a junior partner in Henry Jones' Cooperative Ltd.  rose to become a company director, a ship owner, shipping agent, a timber merchant and a tin mine owner and was appointed Tasmania's agent -general  in London. Though not mentioned on his tombstone his interest in dirigibles is noted. Not a poverty -stricken immigrant to start with, John Foster became one of the richest men in Tasmania through his land dealings, as a ship owner and merchant, hotelier, Legislative Councillor and company director of many companies including the Hobart Gas Company, railways, several insurance companies and coal mines.

Then there are the shopkeepers like Robert Mather, who started a small drapery business in Liverpool Street in 1882 where Mather’s Lane and Arcade now stand and went on to build a long lived empire. Likewise  Charles Davis, a former convict who started a  tin smithing company in 1842 and later expanded into hardware, ironmongering, hotels and motels, and became the fourth largest retailer in Australia. Joseph Bidencope should be here somewhere too, but I haven't found him yet.

John Davies, another former convict, began the Mercury newspaper in 1854, still one of the longest running newspapers in the country. He also had a chequered career as an actor, hotel proprietor, police officer, politician and as proprietor of the aforementioned  Theatre Royal,  from 1854 - 1872.

A little further on lies John Hadley of Hadley's Hotel, which enjoyed royal patronage and was popular with Antarctic explorers, Mawson and Amundsen, as well as that other famous Tasmanian son, Errol Flynn. Built in 1834, it was previously run by John Webb, a pardoned convict who is also buried here. Webb added an icerink and a ballroom. When Hadley bought it after Webb's death in 1891, he was among the first to install electric light in every room, telephones and an electric lift. It too remains one of the more exclusive  establishments in Hobart along with the Lenna in Battery Point, former home of shipwright Alexander McGregor who is also buried here.

The elaborate grave of  George Adams, which includes a lifesize bust reflects the esteem in which the public and most likely the state held him as founder of Tattsersalls Lottery and all -round philanthropist. He also started his Australian career with very little but after making a fortune from hotels and lotteries in Sydney, had interests in coal, electricity plants in Broken Hill, Newcastle and Sydney and owned the Palace Theatre there. When legislation was introduced to make gambling illegal, he moved first to Queensland and then to Tasmania. Although both states eventually outlawed most forms of gambling, the Tasmanian Government of the day granted George Adams an exemption. I'm sure it had absolutely nothing to do with his leaving a proportion of the proceeds of every lottery to two members of parliament in his will.

I could go on and on. Every grave tells a story, even those simple markers that only carry dates and a hand-lettered name. There are tales of adventures and enterprise, of fortunes made and lost, the thrill of forging a nation at the height of the industrial revolution. Evident also are the trials of early settlers including the perilous journey across the sea and the high infant mortality rates from which even the wealthy were not spared. The rows of tiny graves in the children's section send a chill.

Not far from George Adams in the modern section, the most impressive graves are those of Hobart's considerable Greek community, maintaining their wonderful solidarity in death as in life. Mostly in black marble and adorned with flowers, they usually also have perpetual lanterns and pictures of the deceased. It is somehow very intimate - the dead feel less distant and you feel as if you know them too. One grave even has a small outdoor setting to enable family and friends to gather around, much as if the person were still around to share in family occasions. This one could be the grave of the Gypsy King, Tanas Stirio. It's the right location, but the spelling is different. He was the leader of a band "which roamed southern Tasmania in the mid 1900s."

Another very striking  much too recent grave is that of young Cain Lorkin, aged 22, who was by all accounts a motorcycle rider and much missed by both his family and his peers. The headstone bears a poem and a huge sculpture of an eagle as well as several lovely plaques.

One says ”Save a few seats in the bar upstairs and keep the beers cold mate, cause we will meet again and have a few together.”

A little humour may not lessen death’s sting but it does make it less solemn. A spokesperson for Millington's says that a lot of the formality has gone out of funerals, also that cremation is becoming much more popular with around 60% of families preferring it to burials. Not a bad idea as the world becomes a more crowded place, though, while rose gardens are nice and much more sensible, they don't quite have impact of those enormous memorials. I also like the the little spot dedicated to those those "Whose ashes are scattered elsewhere" since it also gives people a quiet spot to sit and reflect. You could do worse than spend a little time with the departed. Me? Next time perhaps. Right now I have some business with the living, but it has been a fascinating journey.