Yep, that’s me flying that plane. This was another Seniors' Week activity and a very popular one at that.  Even the instructor expressed amazement at the number of people signing on for this, sensing a whole new and largely untapped market. While almost everyone enjoys flying, young folk rarely have the leisure or the disposable income to do so and those in their middle years have other, more pressing  issues on their agenda, such as getting established in their careers, paying off their homes, getting their offspring educated or simply putting food on the table, but I do think that there is another factor at work here as well.

While younger generations have grown up with cars and planes as a fait accompli – you take them for granted, use them as you need them, without too much thought about how they got there or what life was like before they became available to ordinary mortals, but for those in their sixties and seventies, who most likely witnessed aviation go from flimsy single prop craft to jumbo jets able to carry up to  five or six hundred people, they were even more of an impossible dream. Only the ultra –rich or famous could ever hope to actually fly one, though the romance remained.

The other odd thing I noticed while waiting for others to return from flights, was how many women not only took flying lessons, but how many had their own planes. Perhaps for successful women of a certain age, the small single seater is the equivalent of the red sports car or the yacht of their male counterparts, once they are left with empty nests and too much time on their hands.

The plane is tiny. Even though I am short, I clout my head on the way in. There's just enough room for  the instructor and me to squeeze in, but I still need a cushion to be able to reach the foot controls. Strapped in and with helmets and headsets on, we do a warm up, a pre -flight check and then it’s “Flaps down” and we are cruising down the runway. After a quick turn to face into the wind, we roar along until the speedo hits sixty kph. Then the little plane lifts effortlessly into the sky and my heart gives that little jump you get when you have flying dreams.  I'm glad the plane has dual controls. Eugene radiates calm and it seems normal - the most natural thing in the world, and utterly safe. 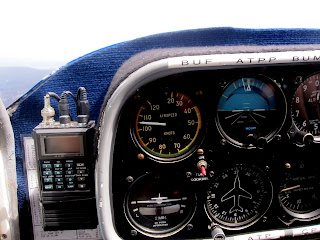 There are no words for that feeling of cruising above the confines of roads and into the blue and seeing the world unfold below - the patterned hills, the farms and vegetation, the convolutions of the river, waves breaking on beach after beach, the snow on distant peaks. It's all so close you could touch it and you long to go on and on over the blue curve of the ocean. The dream lasts until we approach Devonport - a full 15 minutes away. Then the illusion of untrammelled freedom gives way to the notion that there are still lots of rules and regulations, not to mention  powerlines, no – fly zones, other aircraft and the possibility of bad weather,  but the fantasy holds until touch down.

On the flight back, I try to keep the nose straight, but all the while I am mentally calculating what it would cost to get those other thirty lessons or so,  what the maintenance and fuel costs and the cost of renting, or buying and storing a plane might be. Then there are landing fees and the question of how to get around once you do in fact land at some remote airport. Ah well, it was a nice thought and a lovely experience. Thank you Eugene and the Freedom Flight Flying School! I am sure I'll be back.