The East Coast 2 – The Freycinet Peninsula

After another long stretch of winding road I am in urgent need of a coffee break so after turning off towards Coles Bay, I turn in at the first intersection. It's a dirt road with some enormous potholes, but it sounds nice – “The Friendly Beaches,” so named because the first explorers met friendly natives here. It is a friendly place. The sun is shining. There are huge expanses of white sand. Simple amenities are discreetly tucked among the tea -trees and there are magnificent views of the coastline.
For the moment I am the only person there, so I put on my heavy- duty Russian bathers and have a little lie in the sun. I know sun -bathing is a bit risky these days with the discovery that UV rays cause melanoma, but it's still early in the day and I feel like a sun -starved lizard trying to absorb a little heat. I’m not there for more than a few minutes when there’s a flurry of activity.

“A whale!" “A whale!” shouts a man running down to the beach.  By the time I stagger to my feet and get to the headland, the whale is long gone, but it’s nice to know that the whales are returning after being hunted almost to extinction. At this point, the sky clouds over and I jump back into my clothes and my trusty van. Game over. There's a Kookaburra on the powerlines on the way out. Although an Australian icon, they are not native to Tasmania and take over the nesting sites of our many attractive little birds such as the blue wrens and robins.


Further down the road I pass through the picturesque village of Coles Bay which nestles amid bushland overlooking a wide bay.Then I am at the gateway of the Freycinet National Park where there are fees pay. The Peninsula itself was named after a lieutenant on one of French explorer Nicolas Baudin's ships while on a scientific expedition here in 1802, and the Park was established in 1916 to protect its rare plants and magnificent natural scenery. It now offers a variety of walking tracks and other experiences.
I pay my dues at the Visitor's Centre but the Parks Officer thinks it's already a bit late to start on one of the longer walks, so I visit some of the smaller places – Honeymoon Bay, Sleepy Bay and the Cape Tourville lighthouse instead. I then drive back about 13 Kilometres to one of the free camp sites she suggests.
There are other, more beautiful and better serviced sites within the Park precinct and also a plethora of elegant lodges, restaurants and retreats, but this one is probably better suited to my budget and works almost as well. NB: During summer and over Easter there is so much demand for campsites in the main Park area that a ballot system applies.

It gets dark early here and I flatten my interior battery recharging the camera. Now I can’t read. I try the phone. No signal. The computer works for a while before its battery expires too. There’s nothing to do now but eat and sleep. In the absence of television and electricity, it’s that time of day when the melancholy sea  air seeps into your soul and you need a tribe to gather round a big fire telling stories, dancing or singing songs. I make my own little fire in one of the fireplaces, but it’s not the same. There is the primaeval and slightly illegitimate pleasure of actually being allowed to make a fire in the open in these days when it’s mostly all fire bans and fuel stoves, but it doesn’t last long. I make a last coffee by torchlight and jump into bed. It’s a mistake, because it's only about 6.30. I’m awake at 1.30 in the morning and toss and turn till daylight. Then I eat breakfast and hit the road.


In the cold early morning light I begin the Wineglass Bay Walk. At least the Car park is empty now, unlike yesterday, when it looked like the Boxing Day Sales were on. The downside is that there's no one to walk with and walking alone is not generally recommended. I set off anyway but I'm not displeased to see a couple of cheery workmen beavering away near the Lookout Track.  Really, you would have try quite hard to get lost or injure yourself on this track. It's wide, smoothly gravelled and has safety rails and lookouts. Although some parts are steep, there are neat steps, and plenty of resting places. The rewards are stunning rock sculpture and fabulous views.


Beautiful though the Bay is, it was still a bit cool for a swim and the best way to appreciate its magnificent crescent shape is from other places – most likely from that Lookout Track which was unfortunately closed, rather than right on the beach.
After resting here for a while and having a snack while the sun finally struggled over the massive boulders to my left, I begin the longer walk back around the coast. It is a lovely time to do it. Not too hot, a weekday before the main tourist season and before the snakes come out. [Snakewise February – March are the worst months as that is the breeding season when they become more aggressive. Mostly they are as scared of you as you are of them and will try to avoid you unless you accidentally step on them or get between them and their young].

There are no duckboards here or railings or signage on this walk, but lots of birdlife. Now it’s true that people with hot pink parkas might be noticed and rescued more quickly if they fall off a cliff, but would they see the blue wrens and the scarlet robins and would the wildlife stand still as they pass?

This walk is about splendid isolation and wild beaches where the wind whips white -crested waves ashore. I see no other humans, but I can see where they have  been in the  ancient middens where generations of Aborigines lived on shellfish and threw away their shells, the ultimate fast food of hunter gatherers. Their lifestyle does have appeal. Have few possessions and go where the weather is good and the food is plentiful. That is, until you get to the bit where they are overtaken by another culture with superior technology. Then there’s also the bit about having a life expectancy of 40 to 50 years, but then again, I expect that they didn’t  waste time either, on existential dilemmas such as whether to be or not to be, midlife crises or what to do with their elderly. On the other hand, I can also imagine life would be rather ‘nasty, brutal and short’ if you didn’t get along with your tribe, or the neighbours. 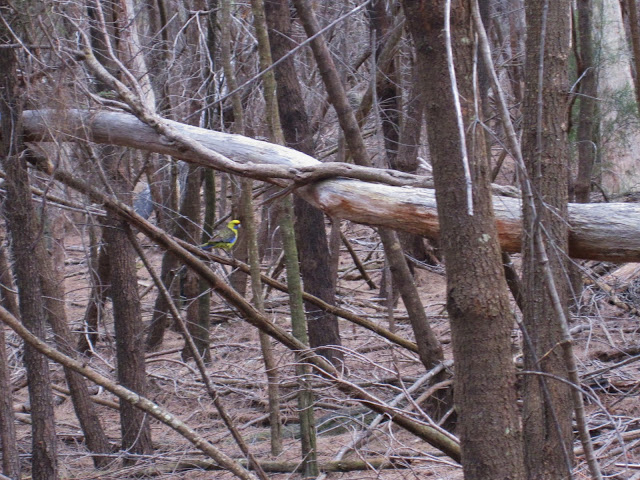 I'm not very good at capturing birds with my camera.
It really needs a silencer, but here's one that didn't quite get away.
After rounding Fleurieu Point there are magnificent views of small islands and Coles Bay but my expensive walking boots are killing me and I am too busy concentrating on hopping boulders to take any more photos. The track isn't especially difficult, but long - 11 kilometres all up, so I'm relieved when I finally reach the Car Park. It's filling up now and clouds are massing overhead. Although it's only a bit after lunch, it has become quite dark. I stop for a bite and head off just as the first raindrops fall. Excellent timing, even if I do say so myself. The weather report for the next few days isn't promising- cold, wind and snow on the mountains, so it's Goodbye Freycinet. It's been nice knowing you, but I do feel I have now done my basic training for this year and Boy, do I need another pair of shoes!