Other Road Trips from Hell - A bad day in Gungahlin

The story of our adventures on the West Coast brought forth a wave of nostalgia. A friend in the US told me about a similarly ill –starred journey to San Francisco during the Summer of Love, driving back in in a ’55 Chevy that had to have its gears changed manually by having someone climb underneath it, and my son in Canberra sent some pictures about a camping trip they were about to take last Easter in their new old car.
It was to be its maiden voyage, its first off the bitumen, out of city excursion, but when they stopped at the service station to fill up, the LPG just kept leaking out.
“I’ve never seen that happen before,” said the service station attendant. The NRMA were called and the Fire Brigade arrived as well.

They decide it looks a bit dangerous.
The next photo shows my son and his girlfriend running away.
The fire and emergency services personnel take over.
This service station and the one on the other side of the road are shut down and the area is evacuated.
They seem to do that a lot in Canberra.
The car is towed to an empty paddock, several hundred metres away.Then it's goodbye car. Goodbye camping trip.
The last shot shows them both at the bus stop, looking very dejected as they wait for the bus home.
You'll be pleased to know that they have since acquired a new car.

I don't know why people think our national capital is a dull place. It seems to me that there is always something going on. When the whole family gets together there at Christmas, it should be a real blast! 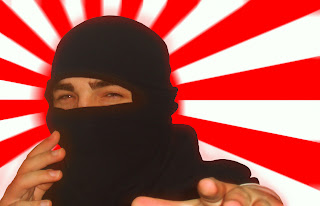