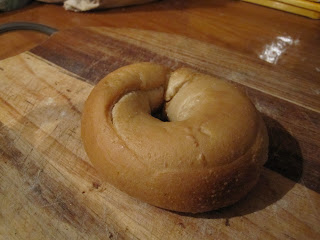 I know this looks like a perfectly normal bagel, but it isn't. And no, it is not a fossilised dinosaur dropping. It is a vulcanised bagel which no knife can penetrate. A bad case of user error in that I put it on defrost and forgot about it.
Now the mystery is not so much what it was, but what it should become. We were never allowed to throw away food as children and it still looks so good, it must have a purpose, if only I can discover it. I have started making a list of possibilities to which you are welcome to add your suggestions.

Do you know I once wrote a long article about 101 uses for twitch which was extremely well received? My mother always said there was a reason why some things grew in abundance, though she never had much to say about the raison d'etre for mosquitoes. Anyway twitch turned out to be surprisingly useful with lots of medicinal applications, apart from giving me much needed physical and mental exercise and I came to the conclusion that it was a valuable and much underutilised resource.
Let's see if we can do the same with a dead bagel. Here are a few ideas to get you going. I'm sure you will have many more.
Now it's over to you. I am just not feeling creative this morning and was really looking forward to that bagel!
Email Post