I guess it was a case of getting back on the horse. After last week’s episode I felt thoroughly jinxed and had doubts about driving anywhere again.  I’m pleased to report therefore that this trip went without a hitch and I didn’t once have to call the RACT.
The East Coast generally has better weather than the rest of Tasmania because it lies in the rain shadow of the Central Plateau. This means though that it is often very dry and plagued by water shortages and drought.  Early spring just after rain, is definitely the perfect time to visit, since everything is green, the creeks and rivers are flowing and young lambs  gambol in the paddocks. There are some lovely beaches along this route  and Orford is a popular holiday resort, but I only manage to stop at Raspins Beach near Triabunna and Spiky Beach a bit further north to give other drivers a chance to pass me. It’s awful being the slowest vehicle on a road where there are very few places to pass or pull over.  Tasmania's oldest church sits picturesquely on a hill at Buckland and the little church museum at Llisdillon is pretty, but today I am in a hurry to get to the Freycinet Peninsula, so I don't stop any more than I have to.
The settlements are still few and far between and punctuated by rocky outcrops. Historically it has always been difficult to get here. See for example the story of the Large (name, not size) family of Swansea (below) whose six children drowned when the only access was by sea. Although farmers began settling the area in the 1820’s, the road wasn't built until convict labour became available in the 1840’s. Many of their works can still be seen such as the Three Arch Bridge at Mayfield and the curious Spiky Bridge a little further north. That construction was difficult is evidenced by some the place names – Bust – me -Gall Hill and  Break – Me –Neck  Hill. It was difficult to drive, let alone build.

Play this little video to get a glimpse of the Spiky Bridge and hear the birds and frogs and the passing cars
Dark Shadows
By dusk I am driving alongside a dark river, hemmed in by a stone wall on one side and cliffs with falling rocks on the other. I feel the loneliness of the place and as if I am surrounded by ghosts. The ghosts of displaced aborigines, of whalers and seafarers, isolated settlers, and the tramp of soldiers and convicts a long way from home. Maybe there are more recent ghosts too, of a fresh faced girl on a bicycle, Nancy Grunwaldt, who disappeared  somewhere along this highway in March 1993, or Victoria Cafasso  whose life ended on a beach near here two years later. Both cases remain unsolved.
Bright Spots
This road is rather inhospitable.The few places where you could pull over are treeless and say “Day Use Only.” There’s even a “Fifteen Minutes Only” parking sign near the toilets at Raspins Beach.  The only place that offers a little shelter and comfort is the Mayfield Conservation Reserve, just short of Swansea when you are heading North.  Quite a few people were camped there already. Campfires were burning and there was the smell of cooking. The smell gave me an overwhelming desire for burnt sausages, but I made do with my curry and rice from the night before. A lone fisherman fished off the rocks at the far end of the beach. Little blue wrens hopped around outside my door and the bush put on a fine display of wildflowers. As a pale moon rose overhead I thought of that poem that begins....

We are the music makers
And we are the dreamers of dreams
Wandering by lone sea breakers
And sitting by desolate streams
World -losers  and world -forsakers
Upon whom the pale moon gleams....
-Arthur William O'Shaughnessy (1844 -1881)
After waking up to the sound of birdsong and the crash of waves on the beach I continued on to the pleasant little town of Swansea.

Swansea seems especially popular with retirees who take the time to garden. It prides itself on being Australia’s tidiest town and has some fine old buildings and neatly restored cottages. There's a seafood restaurant called the “The Horny Cray" and a Bakery and Tearoom at the Bark Mill Museum.  There is also a little walk along the foreshore named after the Aboriginal tribe which used to live here before white settlement, the (please don't ask me to pronounce it)
Loon. Tite.Ter. Mair. Re. Le Hoin. Er.  There are nature notes along the way and a bit of history. The pioneer graves in the little cemetery at the end tell quite a story too.

The area around the town seems to be thriving too as farmers have added new crops and industries such as viticulture, walnuts, olives and berries to more traditional ones such as fishing, wool production and tourism. 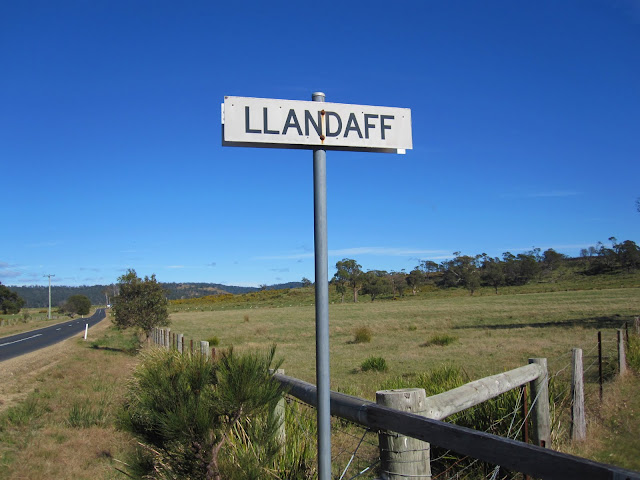 This little place near Apslawn was not so lucky, though it may have been part of a large estate, or one of those swallowed by its neighbours when mechanised farming became popular after the war. There is no indication, only a  small forlorn cemetery. A  plaque says that a former Premier of New South Wales, Sir William Lyne, was born in this district in 1844. Further on at Moulting Lagoon, the U.N. designated Ramsar wetland site for migratory birds, there's a lovely glimpse of coastal marshlands and rolling hills covered in vineyards. Just beyond is the turnoff to Freycinet. It’s a lovely day for it.
This migratory bird stopped here briefly too.