Fortescue Bay to Cape Huay*
*Pronounced Cape Hoy, in case you were wondering.

But First a Word about Wild Walking
So far the walks I have done in this area have been fairly tame. True the Blowhole had a sign warning about freak waves, but on the whole the tracks have been good and the cliffs have been fenced off, making them fairly safe for families. This is not the case on this walk and it’s much longer, so a few safety notes are in order. We do lose the odd visitor this way, so you there up the back, please pay attention. We don't want to lose you too.
First up you do need a National Parks Pass to do most of the walks in this area. Visitors can get these fairly cheaply on a day or eight week basis either for one person or up to 8 per vehicle from any Service Tasmania outlet, on the Ferry, at Information Centres in National Parks, on -line or even from the Ranger at the Campground. Camping fees are extra, but modest in comparison with other forms of accommodation.


No matter how beautiful the weather looks, take warm clothing, wet weather gear, hat and sunblock, water, a torch and a map and record your trip intentions in the logbooks provided. Walk with others if you can and be prepared to turn back if the weather changes. Take all your rubbish with you and don't pick or take anything along the way. Make sure your shoes and any equipment such as tent pegs are clean. One of the biggest threats to our native vegetation is a root rot fungus (phytopthora cinnomoni) carried on hikers' boots. Another imported disease is giardia, a parasite which causes bloating and diarrhoea. This is now in many of our waterways and carried by wildlife, so do not drink wild water unless it has been thoroughly boiled for at least three minutes.
For the same reason, do not bury human waste near streams. Bury it deeply and cover it firmly, so that it is not dug up by animals. Don't feed the animals either. Processed food makes them sick and they become too dependent on humans. And, as anyone knows who has ever been dive -bombed by seagulls or crows, they can also become pests.
Be careful of stepping on penguin burrows near shorelines and don't ever bring dogs or cats, which are also very destructive of our wildlife, especially small mammals and ground fowl such as native hens and penguins.
Because of the fire risk, most parks are now fuel stove only areas, though the campground still allows fires in fireplaces and also has free gas barbecues.
Oh yes, and watch out for snakes. It is in fact illegal to kill them, but they are not so restricted, so wear thick socks and strong boots and try not to annoy them. OK, got all that? Then let's get going!

As usual, I start off really early in the morning. I’ve been doing that since the Overland Track, when I found out that when a ranger says it takes 4 hours it is likely to take me twice as long. I don’t want to do it like a forced march either. I like to stop here and there to contemplate or take photos or just have a rest when I feel like it. There’s a long slow uphill slog  first which, while it makes me labour, gives me cheer because I know it will be downhill all the way at the end, which is often very welcome by that time. I keep expecting to see the sunrise over the next hill, but it’s high in the sky by the time I finally clear the last one and oh what a view!
There is track work going on. Even as my feet are saying”Aaah! That feels good,” my brain is saying soon it will be like Freycinet – bookings only, car parks full,  or worse still, like a National Park I once visited in South Korea – walking several abreast  with hundreds of others and with coffee machines every few hundred metres.


Suddenly there’s a steep descent and in the distance you can see the track winding on and on over the three humps that make up the Cape. In the sheltered valley between the hummocks, there is a garden of coastal heath plants but on the seaward side, battered by strong salt -laden winds, the vegetation is sparse and harsher looking. Only the occasional bonsai tree manages to cling to the exposed boulders at the top. It is terrifying to look down to where the sea boils far below, but the vistas to the north and south are splendid. A lone charter boat looks like a gull on the wing. Two girls I met in the campground last night will be on it. It would be a wonderful way to explore all those sea caves and at $80 - $100 not that expensive either, but they wouldn’t get the bird’s eye view I am getting from here. The cliffs are so high, I can’t fit them into the frame of my camera, as the little film clip below will show. You will also hear the sound that the sea and the wind make and occasionally the crack and tumble of a rock.

About halfway across this Peninsula on the Peninsula, there’s a huge sinkhole to my left and the sea churning away far down on my right. Once you could have believed that it could never break through in a lifetime, but not now, not since London Bridge. This was a similar combination of sea cliffs and geological formations on Victoria’s Shipwreck Coast which fell down while two tourists were on it. Miraculously, no one was hurt and I hope they took a Tattslotto ticket afterwards, but you can never again be sure that that geological second isn’t now. By the way, unlike the lookouts on the Waterfall Bay track, none of these areas are fenced, so it is not recommended that you bring children on this walk, but if you have mistakenly brought them with you, and they are anything like mine were, now would be a good time to put them on a leash. 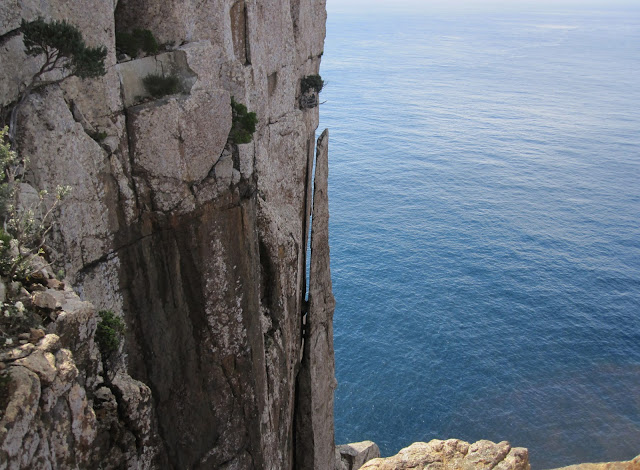 The track ends at the amazing stacks called the Lanterns and there are also two pillars known as the Candlestick and the Totem Pole for obvious reasons. The island beyond  is Hippolyte Rock, where bull seals like to rest up on their way to visit female seals along the east coast. Sharks patrol the Bay. The sea below boasts unusual species, such as sea horses and sea dragons in its giant kelp forests. The diving is said to be good and there have also been plenty of shipwrecks. The wreck of the steamship Tasman which went down in 1883, lies in 70 metres of water just south of Hippolyte Rock after taking a shortcut in a race against another steamer. All passengers and crew made it safely to Fortescue Bay and the captain, despite being involved in another wreck, went on to become the Governor  of Tasmania.
It is possible to walk on to Cape Pillar from here, those rocks you can see far to the South, but this is a two day walk and I haven’t brought a tent or food for overnight, so after having my lunch and gazing at these awesome cliffs for a while, I begin to make my way back. Just as I am crawling up that very steep hill, I’m lapped by a young couple who started much later than I did. Other walkers are invariably polite, friendly and chirpy, but the birds stop chirping and I have to resist the urge to hurry up. It reminds me of walking with my ex. or the occasional foray with walking clubs. My ex used to be a scout master, so there was the sense that you had better move along or you would be letting down the side.  Walking clubs allow you to visit unusual places that you would never find on your own, but are fraught with similar hazards. I can remember puffing up the hill with my two year old daughter on my back, only to find everyone else well rested, raring to go and looking annoyed that I had been holding them back. Much as I would like to have a walking companion from time to time and it would be much safer – one of you can go for help if you get hurt, this encounter reminds me why it’s also nice to walk alone. I am very, very careful where I put my feet and always take my time.
Eventually I find myself back in the Campground where I enjoy a long hot shower, not one of those where you just get shampoo in your hair and then the water cuts out.  I do a small walk to the piccaninny swimming pool, where Aboriginal mothers taught their offspring to swim and spend some time talking with the ranger. He tells me that the sharks which patrol the outer perimeter of the Bay, keep the penguins safe from seal attacks, but the real problem here is feral cats – domestic cats that have gone wild. As we sit on his front lawn, pademelons come down to graze and even one of those elusive blue wrens. The fishermen who were out on the Bay, rush back in saying they have just seen a shark longer than their dinghy. They build a campfire nearby and I can hear a radio playing softly. It’s been a fantastic day.
Email Post