The Silver Falls are the top end of the Pipeline track which continues across the road behind the Bus shelter and descends for about 50 minutes to the reservoirs at Waterworks Road. The Pipeline was  built in 1861 to carry water from the slopes of Mt. Wellington to the burgeoning City of Hobart. Until then, Hobart had made use of the Rivulet which still flows beneath the city, but which had become little more than a moving cesspool due to its use by industry and this had resulted in outbreaks of typhoid.
It was an enormous challenge to the engineers of the day and several changes in technology can be seen along the way. Initially water races, aqueducts and sluices were carved from the local sandstone, but gradually these were replaced with ceramic pipes, then steel and finally concrete and continue to supply water to the city today.
I am taking the easy way today and walking the track from the top to the bottom, but the walk can also be started from the other end at the top of the upper dam off Waterworks Road. Just drive up this road until you come to a Parking area on the right side of the road, then go through the gate and the picnic area and follow the road around the dam. Be warned though, this gate closes at 4 p.m.at this time of year.  To my shame, I am passed by what looks to be a four year old boy and what is possibly his grandma walking the other way, but the grades seem gentle enough.
After the track crosses Chimney Pot Hill Road to Ridgeway, it goes through  more open country where the wildflowers are already in bloom. Not surprisingly, the Tasmanian Branch of the Native Plant Society has a Nursery near here, though it's currently closed. This is Hall’s Saddle. As well as  providing another convenient access  point to the track with better parking, it also has a picnic table and a free barbecue. Watch out for barred bandicoots here and other small mammals such as pademelons (a small rounded marsupial) or the antichinus, which looks a lot like a mouse, but is in fact a small marsupial too. Sometimes you will see echidnas here, especially in early spring and at any time of year watch out for wallabies and their cousins which come out in droves at dusk. Drive SLOWLY if you are driving at this time to give them time to get out of the way. 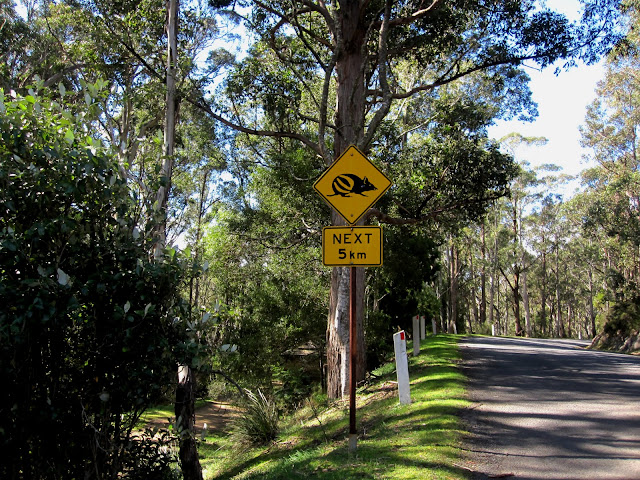 It's sunnier on this side and there are a occasional glimpses of Mount Wellington. What you can't see is the fearful wind (unless you watch the little video). 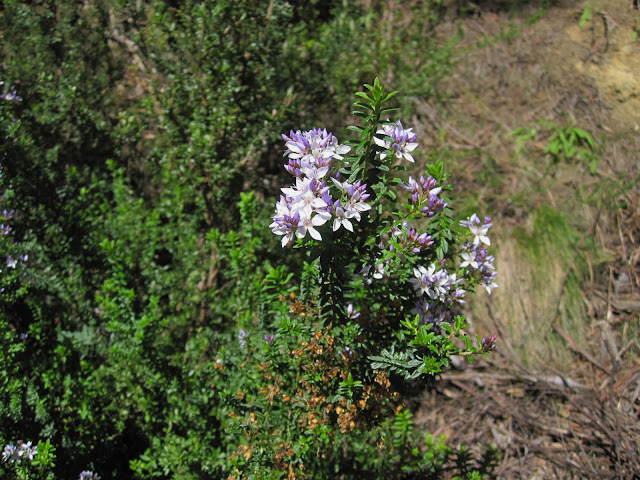 At about the halfway mark, I come upon an open clearing. This was Bill MacDermott’s farm. Bill was an eighty year old hermit who farmed here with his dog, Brandy Shamrock McShane. While he managed to survive  the 1967 bushfire and was hailed as a hero in the local paper, he succumbed a week later, after being gored by one of his fire –crazed bulls. This and other stories about the pipeline are told in interpretive panels along the way.


I sit for a while where Bill’s home used to be and take  in the magnificent view. It’s no wonder that he fought as hard as he did, not just the fires, but also the City of Hobart, which lies far below. Only the daffodils remain.
Tasmanians still shudder when they talk about that terrible day on February 7, 1967, when fires ravaged 2640 square kilometres of bushland in five hours. It still ranks as one of the worst fires in Australia's fire prone history. Sixty -seven people were killed, 1293 homes were razed and 7, 000 people were made homeless. It's estimated that 62,000 farm animals were lost, not to mention those in the bush. (Coincidentally, the  equally savage Melbourne fires of 2009, which claimed 172 lives also broke out on a February 7).
It starts to rain again as I leave here and the wind develops a keener edge, so I hurry on down.
The sun comes out again as I near the end of the track, but I can see dark clouds banking up again on the mountain and the wind hasn't abated, so I decide to call it a day. There are lovely facilities here, including an interpretive centre and other tracks, both short and long, but I'll save these for another day.

Hobartians seem to know all about these places - information passed on from one generation to the next,  no doubt, but strangers rarely hear about them. Will definitely bring my next visitors here and do some more exploring.


For now it's phone a friend time, so that I can get back up to my car.