You don't see it much any more. A gaggle of children just playing outside together and amusing themselves with very little in the way of equipment or supervision. If you told them they had to climb up that hill forty times to enjoy the brief thrill of sliding and tumbling down, they would never do it. My daughter and her little friends just loved it when they were little and I confess to having enjoyed it too. There just aren't too many opportunities these days, especially in an urban environment.
Just before Christmas, when my friend and I were looking at toys, I was saying how I didn't like things that were 'too finished' and preferrred more open - ended things, which stimulated children to think of things themselves. I told him that one of the best and cheapest presents my sons had, was a piece of rope with which they could swing down from their cubbies, tie pirates to the mast, tow things etc.etc. "Yes," said my friend, looking at a large pink plastic thing with lots of knobs and dials, " Buy something like that and the kids will play with it for about an hour on Christmas morning and spend the rest of the day playing with the box."
Well, that's exactly what these children seemed to be doing. Sliding down on flattened cardboard and then dragging it back up the hill to do it all over again. You didn't have to tell them to excercise because it was good for them either.

Had occasion to go to the park yesterday to meet up with the people who run a local produce exchange in this area. It was a lovely afternoon - children playing, even the dogs, while the adults enjoyed a cuppa and some food they had brought to share. It was all very friendly, casual and neighbourly. The group is still very small at present and I was a bit embarrassed at having so little to exchange, but I came away with  lemons, new potatoes, some spectacular zucchinis and two tomato plants in a pot. It's a great idea.
It's early in the season here and there isn't much surplus, but what cannot be swapped is passed on to Second Bite which distributes food to the needy, or it is given to a local institution which looks after homeless men.
This is also a wonderful idea. Interestingly, the state has recently passed legislation to protect donors of food from liability. In fact it is part of a wider Good Samaritan Act to protect those who help others


"The Good Samaritan provisions mean a person who volunteers to assist someone who is ill, injured or at risk of serious injury, will be protected from civil liability if their help inadvertently fails to improve the other person’s situation. Provisos relate to assistance being in good faith and without expectation of reward"


When then Premier Bartlett introduced the legislation in 2008, he said  that he was doing so to make Tasmania "a kinder place." Certainly, it would prevent the kind of situation faced by people who witnessed the little girl being run over in the marketplace in China, but who declined to get involved because they feared prosecution. I understand that this is a big problem in the U.S.A. too.
Even more unusually, Premier Bartlett acknowledged the input of the Opposition member in passing the legislation. "We do not have a mortgage on good ideas." Now that's what I call governing for the people instead of the ridiculous situation we have at Federal level now, where there is opposition and  blocking of good legislation, simply for the sake of it, except when it comes to awarding themselves payrises.

Meanwhile, the new act here will allow many other businesses and individuals to participate and reduce the enormous amount of food which is presently wasted. I don't know the figures for Australia, but the Worldwatch Institute says that up to one third of the 1.3 billion tonnes of food produced each year is presently wasted and just the 34 million tonnes wasted in the U.S.A. each year would go a long way towards easing the hunger of the 1 billion or so people in the world who presently do not get enough to eat. Yes, I know it is often a question of logistics. The extra peas on my plate will not help a starving African, but thinking about them might. I am pleased to see that at least one of the major national retailers is contributing substantially  to Second Bite.

The U.S.A. does have similar food bank programs. The following are listed on the Worldwatch site above.

The charity group Feeding America partners with over 200 local food banks across the United States, supplying food to more than 37 million people each year. To find a food bank near you, visit the organization’s Food Bank Locator.

In some cases, food-recovery systems will come to you to collect your excess. In New York City, City Harvest, the world’s first food-rescue organization, collects approximately 28 million pounds of food each year that would otherwise go to waste, providing groceries and meals for over 300,000 people.

It was good to have spent some time with positive people and I came away  feeling rather pleased for no good reason. 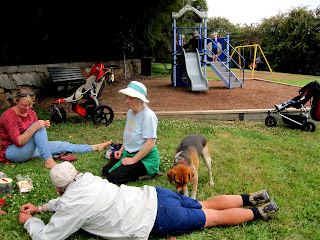 On the way back I passed the row of trees where the shoe tree was some months ago. I was a bit worried because a lot of them had been severely pruned and I couldn't see the shoes anywhere. I needn't have been. The one tree that was still more or less intact, was now sporting a strange configuration of gleaming brass taps and a showerhead. 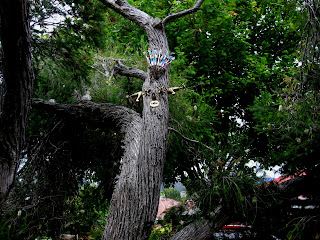 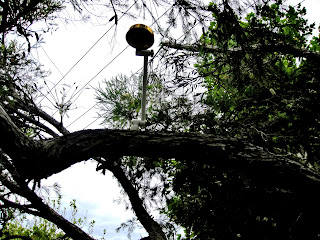