Christmas is over. I'm down to the peppermint creams in the chocolate department and I've just had to weed my car! Yes, you read right. While I was away, almost everything I planted except for one strawberry plant died, but an amazing creeper spread all over the driveway and up the wheels of my van. It looked exactly like those pictures I was looking for earlier where nature reclaims the city. Wish I had taken a photo, but I was in a bit of a hurry lest the car disappeared altogether.

The mail came. The postman must have found his Christmas Greeting as I got four other people's mail as well. Mine was a letter from the health insurance company telling me that I am covered for tonsil removal, but not for anything I might actually need such as kneecap or hip replacement, heart surgery, eye surgery or major dental (or for IVF and pregnancy related issues for that matter, not that I am likely to need those in a hurry) and they suggested that I might want to upgrade my cover,  though I can barely afford it as it is.

Speaking of mail, I have lately become a fan of Terry Pratchett. Keep an eye open for his Going Postal 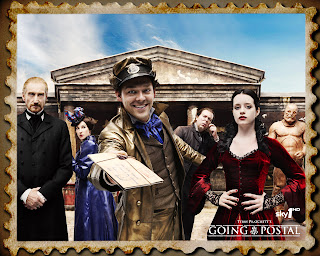