Bird on the Wing – A visit to the neighbours


Oops! There goes my green halo. I’ve just had a fantastic couple of weeks on New Zealand's South Island. It was an offer I simply couldn't refuse, especially as I already had to go to Sydney. Can we please have Tesla planes happening really soon! Meanwhile, flawed as they are, I have paid Gold Standard Offsets for all travel including car rental. The flight from Sydney takes around three and a half hours. It could take even less next year, when direct flights are scheduled to resume from Hobart. Still, due to the time shift it’s almost dark when I arrive and I can't do much exploring until the next morning.

It's wonderful waking up in Queenstown with snow covered peaks all around and paragliders drifting down from pine clad hills like so many orange butterflies. Flowering cherry and plum trees are in bloom and other deciduous trees bear their first flush of green. It’s still two weeks before the official start of the tourist season - 28th of October, so prices (apart from food) are still fairly reasonable and the streets and hostels are not very crowded. Three helicopters clatter overhead while I'm relaxing au naturel in the open -roofed spa. That was a sight that was to become all too common - the helicopters I mean.


I’d already been to the North Island and the top of the South Island some years ago.What struck me then as it does now, is how, apart from its hot springs and geysers, how similar New Zealand and  Australia are– a sort of parallel universe to our own, with similar architecture and even place names, without us knowing very much about each other. This is in part because news flows tended to come via the UK and the USA.  It is however, not so surprising given that both were British colonies and were ‘discovered’ and settled by Europeans at the same time. Abel Tasman dropped by in 1642 on his way to 'discovering' Tasmania, though he didn’t land and Captain Cook who did make landfall in 1769, claimed it for the British Crown before going on to ‘discover’ Australia the following year. We speakthe same language (more or less0 and drive on the same side of the road. As one of the tour guides said, pointing westwards, “If you go two thousand miles that way, you’ll come to our third Island - Australia.”

The South Island turns out to be more like Tasmania, though it's four times the size and has eight times the population. Beyond a handful of other larger cities such as Christchurch, Dunedin and Invercargill though, its population too is thinly dispersed and largely outnumbered by sheep, with a few vineyards, orchards, deer farms and alpacas in between and the occasional dairy or cheesery, as they call them in N.Z. True, New Zealand has higher mountains, fjords and active glaciers, but its rainforests have almost identical species to ours and also emerged in Gondwana times. Queenstown N.Z. lies at 45°S whereas Hobart is at Latitude 43°S. New Zealand's history of logging, mining and more recently, hydro -electrification and conservation, also parallels our own. Like Tasmania, the New Zealand economy also suffered greatly when Britain joined the EU and had no more need for its farm produce.

Just as I am thinking we have more in common with each other than with either of our North Islands, I experience my first culture shock. I am in the supermarket shopping for food to have in the hostel. The instant coffee we buy for around $20 a tin and even less on special, costs $47 in Queenstown. A 125g punnet of blueberries which we can get for around $3.50 is $13.20 here. The only thing I can find which is cheaper than in Tasmania is capsicum. 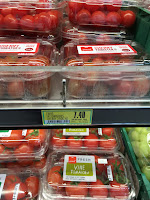 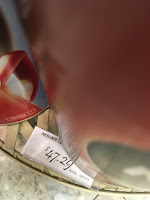 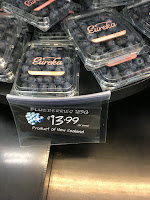 I see the beginning of a hot TransTasman Trade Deal here. Could we swap blueberries for half a dozen capsicum? We could even throw in the odd tin of coffee


I pick up my iridescent Christmas beetle of a car. I had rather hoped I might be able to share costs with someone at the hostel, but that wasn't to be. Most people either had their own transport or were in some kind of group and in all my travels I only met one hitchhiker. He was rushing back to Queenstown to pick up a rental car, so combined with the likelihood of bad weather, that didn't seem much of an option either. I had heard that the bus services weren't too bad, but also more expensive and inclined to take their time e.g. the 3.5 hour car trip to Milford Sound takes 5-6 hours by bus and the four hour car trip up the West Coast takes about 8.  I wouldn't have been able to get to some of the places I wanted to see either. At least the car is small and doesn't appear to be a gas guzzler - 6.7 litres per hundred km. Petrol is about  80c per litre dearer here too, depending on where you buy. Unlike in Tasmania, some country service stations turn out to be cheaper than those in the main centres.