Officially it's only 232 Km to Arthur's Pass but the road becomes more difficult after I leave Franz Joseph and I miss a lot of beautiful scenery because of the rain. Through a blurred windscreen I can make out precipitous mountains with snow on top and although I have breakfast at yet another lake, it’s another sodden affair because it’s raining so hard. In that respect it is also like our West Coast. It looks beautiful on a sunny day, but when it rains, and it rains a lot, it looks sad and dismal and you feel as if it will never end. At one of the few rest areas along this route, someone has put out two armchairs to take in the view of the beech -clad mountains, but as there’s no shelter, there’s no point stopping, though there's a sign close by which reads "Free showers and Tarot Readings." I'm not quite sure how those things go together.
I would have preferred to break this section up a bit more, but there are few hostels after Franz Joseph and I've already booked Arthur's Pass, so I  don't have much choice. I pass some very large braided rivers, a few uncontrolled rail crossings and one or two larger towns. I also find myself dodging a lot of big trucks, especially around Hercules Pass.

The Otir Gorge Viaduct just before Arthur’s Pass is an engineering marvel spanning the valley with a slender 440m (1443’) long arch. Opened in1998, it is an engineering feat in more ways than one. It has also been made earthquake -resistant since this the second of only three passes between the east and the west and it lies directly over the Alpine Fault which runs almost the entire length of the South Island. The road I have been driving since Wanaka follows it closely and Franz Joseph Village sits right on top.  On its eastern flank, the Pacific Plate pushes upwards to make the Southern Alps higher, while the Indo –Australian Plate which underlies it on the eastern side, is trying to move north. Occasionally there are ructions. The 6.3 Christchurch Earthquake  in February 2016, was a wake -up call which the whole world heard about, but few people outside New Zealand heard about the even bigger one in Kaikoura the following November, which measured 7.8, possibly because there was less loss of life and much less property damage. Between them, they have inspired a flurry of research, more public awareness and a greater emphasis on disaster preparedness. Zoning laws have been modified to minimise potential damage - e.g.  No more new buildings can be built in Franz Joseph and critical infrastructure will most likely be progressively moved.  One small business in  Whataroa  just past Franz Joseph, has already seen the tourist potential.

The Village of Arthur’s Pass is quaint, historic and a huge relief after a long period without any human habitation.  In the morning, despite drizzle, I do the walk to the Devil’s Punchbowl, a magnificent 131m high waterfall which is the second highest in New Zealand.  The walk is supposed to take about an hour, but it involves a steep uphill climb and I am pretty sure it took me a lot longer. I’ve been having a bit of trouble with those uphills for a while now and getting terrible cramps in my legs. At this stage I take my trekking pole and take my time, but I’m starting to feel glad that I didn’t book any of the longer walks such as the Milford Track or the Routeburn. If you do them in the tourist season you have to book well ahead and the huts cost around $145 - $175 per night. If you do them earlier it’s cheaper, but then they aren’t serviced. That means there’s no heat or running water and you have to carry everything in. There is also still the risk of avalanches and no DoC  staff to make sure it's safe before you proceed. For the moment I’m happy that I can still walk far enough to see such magnificent natural wonders – I always was a waterfall -bagger, rather than a long distance trekker anyway, but fear my days of longer walks and carrying 25 -30 Kg packs are very likely over, along with roughing it in tents. 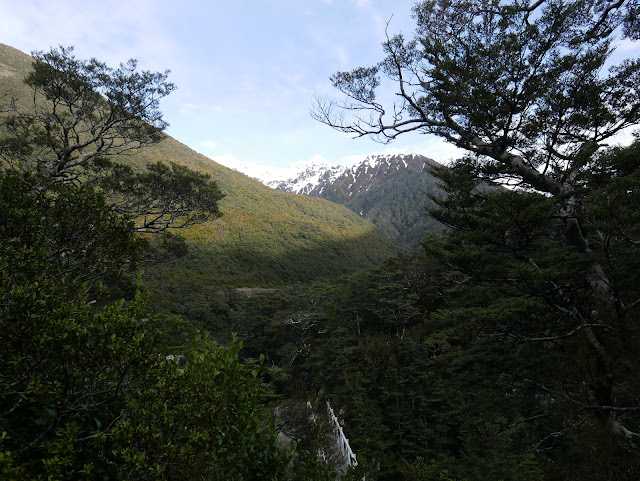 The next listed hostel is at Lake Tekapo, 305 Km south, via the Inland Scenic Route. Here too I wouldn't have minded a break of journey. Although I notice that there is a Backpacker establishment while passing through Geraldine, the necessity of having to book ahead at this time of year, means that unless they are listed online or part of a chain such as YHA, you don't  find this out until it's too late.  Being much closer to Christchurch, there is more traffic on this route than on the coastal side. Though I am still accompanied by high mountains, there are also patches of green and gold farmland and some larger towns such as Ashburton and Geraldine.

After Geraldine, where the road becomes the Inland Scenic Route, it is called the Starlight Highway. This is because it is part of a Dark Sky Reserve centred on Lake Tekapo and Mt. Cook. The Mt. John Observatory at Lake Tekapo is a world famous centre for astronomical research which also offers tours.

Lake Tekapo itself is a popular tourist spot. It's main claim to fame is the Lake's brilliant blue colour created by the surrounding glaciers. Its second is its proximity to Aoraki (Mt. Cook). Although Mt. Cook's height has recently been revised downwards to 3724m due to a rockslide, it is still the highest mountain in New Zealand.  Perhaps I was too tired to appreciate it, or because I had already seen so many beautiful lakes, but Lake Tekapo just seemed like another overhyped tourist town to me. There I go again. One minute I am complaining because there's hardly anything between destinations. The next minute it's because where the services are, it tends to be very crowded.

The hostel is separate to, but part of a larger motel complex. It's clean, new, expensive and has all facilities, but lacks any kind of atmosphere. Not that you always want a rah, rah social life, but the few fellow inmates here seem to be inseparably wedded to the invisible world at the end of their iPads and iPhones. By the way, if you see a sign for a bakery in New Zealand, that doesn't mean that you can buy bread or or bread rolls - unless they are filled. They are mainly about pies.