New Zealand has 3,144 glaciers, including 18 on the North Island, but unless you are prepared to fly, only three are accessible by road – Fox, Franz Joseph and those around Mt. Cook.  As the crow or the helicopter flies Mt. Cook is a mere 23.3. Km away from Franz Joseph, but because there are only three passes over the Southern Alps, getting there by car involves a gruelling 6 -7 hour drive -something to look forward to tomorrow. Now I know why there were so many helicopters in Queenstown.

The Heritage Highway follows the coastline for a while before turning inland.  Along with the usual crowds, I stop for a while at Ship Creek, so named for a shipwreck which is reputedly visible at low tide.  There are two short walks here – one along the beach, the other into swampland.

Low lying relatively flat areas like this with access to the sea were not only a rich food and fibre source for the Maori, but were very attractive to early settlers seeking pastoral land which could be easily cleared, making this type of habitat very rare now. The little that remains has been included in a vast UNESCO World Heritage Site which covers 10% of  New Zealand’s land area and extends from  Fjordland in the south,  via Mt. Aspiring in the west and Mt. Cook in the east to beyond the glaciers to the north.  Ancient Kahikatea trees, a type of conifer and New Zealand’s tallest tree, can still be seen here, although most were cleared for agriculture and especially to make the unique butter boxes used to transport New Zealand’s dairy produce to the UK.  The abundance of marine life here – fur seals, crested penguins, Hector’s diminutive dolphins, a variety of sea birds and the occasional whale, are now also protected in a series of marine reserves.

By the time I get to the Fox Glacier turn -off, the rain has miraculously eased to light drizzle. Alas, the access road has been partially washed away by  catastrophic floods and landslips in March 2019 and having already spent thousands on the road in recent years, it looks like the Department of Conservation  (DoC) is not going to bother repairing it again, especially as the glacier has shrunk so much. 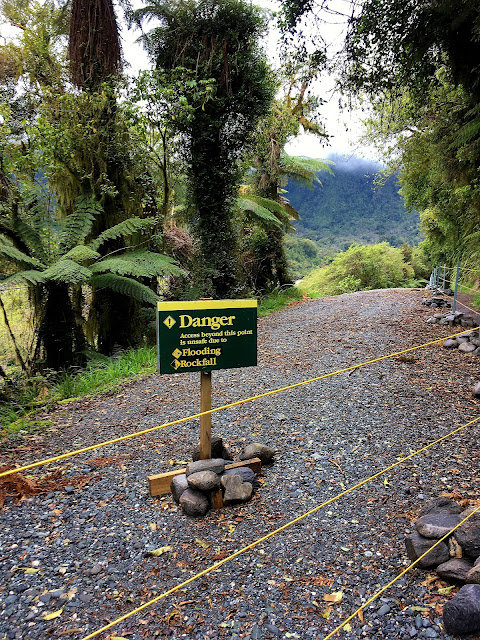 An alternative track, the Moraine Walk is pretty and informative, but only leads to a lookout from which you can just make out the outline of the retreating glacier. Although it is one of the larger glaciers, guided walks have been abandoned here since 2016 and the only way to see it properly now is via helicopter.  Strangely this has not deterred the crowds. Glacier tourism is still on the rise. Depending on which reports you read, 700,00 people a year still come to see them and in 2007, glacier tourism was worth around $NZ 100 million to the New Zealand economy.  In her excellent  article about the future of glacier tourism, Heather Purdie*  argues that this “could be understood in terms of last-chance tourism, a phenomenon defined in part as “tourists explicitly seeking vanishing landscapes” (Lemelin et al 2010: 478). If nothing else it confirms that climate change is real, in case you need convincing. Low level temperate zone glaciers such as these appear to be especially vulnerable as are those in the tropics.

The weather begins to close in again as I leave. Pretty soon I am cold and wet and the rain seems to seep into my soul. I had planned to walk Lake Matheson and stay in Fox Glacier Township that night, but Lake Matheson’s famous reflections don’t work in the rain or even when it’s windy, so I continue on to Franz Joseph, completely forgetting that I had prepaid for this hostel.