Gunn’s Camp - The Land of Doing Without

Gunn’s Camp deserves a special mention since it was one of my more unusual overnight stops.  It’s an unpretentious collection of small cottages which were built for the families of road workers in the 1930s while the Hollyford Road was being built. After WWII halted the project two years later, they were abandoned and gradually came to be used by holiday makers. Some were also gutted for building materials such as stoves and roofing, because of post war shortages. 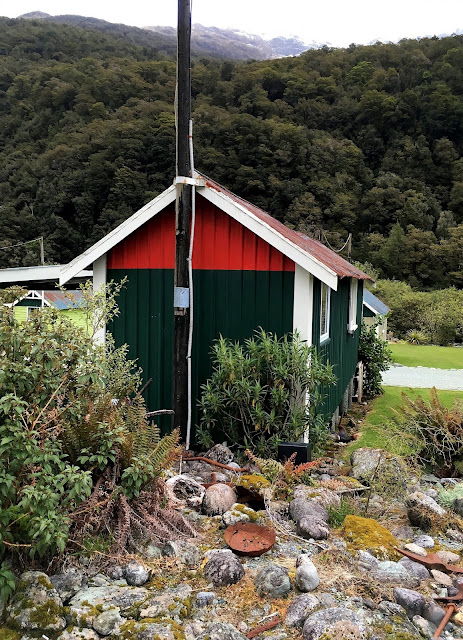 In 1951 they were bought by an eccentric pastoralist, Davey Gunn, who began to operate tours for hunters and walkers. After his death in 1955, his son Murray took over and added a few flourishes of his own. By way of  example, he painted one side of his horse in big white letters that said ‘cow' while the other side said ‘horse,’ so that the hunters wouldn't mistake his brown equine for a deer.  I suspect that the unusual stand -alone gate was probably his idea as well. The sign on it says,” No sandflies beyond this point.”  Too bad that sandflies can’t read. Since Murray’s death in 2014, Gunn’s Camp has been run by a charitable trust.

There’s also a sign at the front entrance that says,  “Welcome to the Land of Doing Without.” It certainly was for the road workers and their families. There is no mains power and no internet but the separate kitchen, lounge and shop are brightly lit by a generator which is turned off at 10. The kitchen and bathrooms are immaculate and steaming hot water is supplied by a giant wood -fired boiler.  Most of the huts also have wood stoves.  Mine doesn’t, but the manager brings me a hot water bottle instead along with a head torch. I have the feeling that he expects me to be shocked or surprised at the amenities or lack thereof, but compared to the house in the bush where we lived for seven years, this is positively luxurious. We didn’t have power or a generator and Gunn’s at least has flushing toilets. My fondest memories of that time - when not washing nappies in the copper outside, or cooking over the single burner Primus stove, were about how lovely it was being able to see the moon and stars at night, the pervasive smell of wood smoke and of being awoken by birdsong instead of morning traffic.

The kitchen doesn’t have the usual pots and pans,* so I am reduced to eating cold left overs and getting a cold overnight oatmeal porridge ready for the morning. Luckily I still had my Kevlar knife and fork and a yoghurt container. The more urbane hostellers among us are thrilled with the lack of amenities, the chance to play with or sit around a wood fire and to experience the absolute darkness and the stillness that comes once the generators have fallen silent.  It’s then that you become aware of the rush of the river or the hushed swoosh, swoosh of a night bird's wings. Two of my fellow hostellers are orchid hunters and have written the definitive work on New Zealand’s orchids, so I show them some of the ones from Tasmania on my phone. They are very impressed. I’m not sure I would recognise a New Zealand orchid. They are tiny and don’t have any flowers yet. They also tend to inhabit the tops of trees, but it’s interesting all the same and the ferns and mosses are both pretty and prolific.

* I think the assumption is that walkers coming off the Hollyford Track - one of the Great Walks, or similar, will have their own cooking and eating utensils! 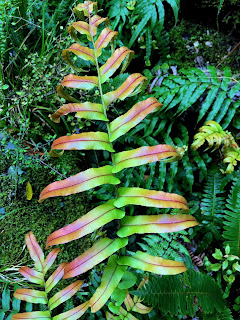 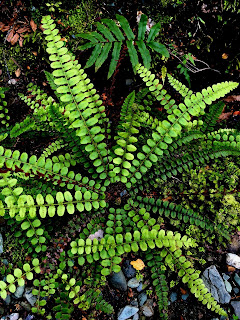 After dark I go in search of glow worms which allegedly live in a riverbank nearby. I don't have much luck. There's no moon and it's overcast and drizzly so perhaps they have the good sense to stay inside. As I walk back I hear an occasional crack, crack or a muffled BOOM! BOOM! on the mountains which tower above. I am not sure if I am hearing avalanches or only people blowing them up.  By this time I don’t even care.  It’s been a long day and my little house called “George” is surprisingly warm and comfortable. I can’t quite put my finger on why I like this place. The humour is corny. Maybe it’s the scale – the way the human made structures don’t dominate, but nestle beneath those mighty mountains. You feel close to nature and  get a sense of what it must have been like for those early pioneers - a tiny bit of warmth and comfort in a trackless wilderness. It is certainly the only affordable accommodation within range of Milford, if you can get any at all.

In the morning the proprietor won’t let me leave until he’s had word from New Zealand Transit that the road will be open. “Don’t worry,“ he assures me, “None of the other passengers can get through either, and they won’t start the cruises until they do.“

Shortly after 7.30 I’m allowed to proceed to the Milford Road where a queue is forming behind the barriers. The road still wears a light dusting of snow. I’m about fourth in line but another twenty cars or so quickly pull up behind me. They must be coming from the several B and B’s further back at Te Anau Downs and we are all way ahead* of those coming from Te Anau itself, and  especially those travelling from Queenstown.  A Ute carrying orange clad workmen pushes through. The men unlatch the barriers and we are off like horses out of the starting gate.  Look out Milford, here we come!

*Tip: The early morning cruises are much cheaper and you have a better chance of getting a parking spot without having to pay $10 an hour.