On the Road to Milford Sound

Morning dawns and I follow the crowd through Te Anau Downs, the Eglington Valley, past the Mirror Lakes and to the Divide. The Divide is where a mighty glacier once ploughed down from the Darran Mountains and split into three creating the Eglington, Greenstone and Hollyford valleys. Generally I like to avoid the must –do tourist meccas. In fact, I especially booked the less  -travelled  Doubtful Sound  instead, but as I was doing so the operators threw in a Milford Sound Cruise with their sister company for very little more, so how could I refuse? Besides, a nagging little voice in my head was saying, “How can you come all this way and not see it? It’ll be like going to Paris and not seeing the Eiffel Tower.“ So here I was, following everyone like a sheep. The road is narrow and as usual there really aren’t any other places to stop. 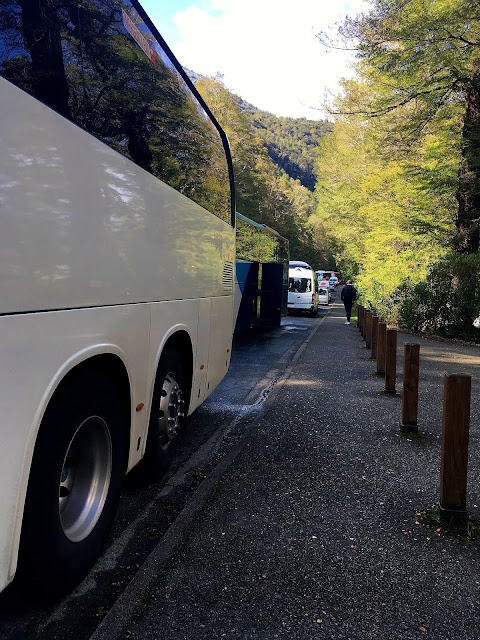 All things considered, I'm lucky to be able to drive along this road at all. It is another remarkable achievement. Although tourism began at Milford Sound as early as 1891, it was not until 1929 that that men armed with picks, shovels and explosives began work on the road. Like the Haast Pass Road this was another Depression era project. Alas, a gigantic granite outcrop – Mt. Gertrude, blocked the final descent into the Sound.  Although explorer William Henry Homer proposed building a tunnel as far back as 1889, work did not start on this until 1935. Even then, after being interrupted by World War II, it took another 19 years before the road was finished and another 37 years before it was sealed. Homer who died in 1894, never lived to see his dream become a reality.


In 1977, it was decided to keep the road open all year instead of closing it in winter because of the risk of avalanches. Among the first casualties was works supervisor, Robert “Pop’ Andrews, after whom a rather beautiful lookout is named. Since then, world class avalanche monitoring and dispatch technology has been developed to ensure the safety of the 500,000 to 1,000,000 visitors who drive State Highway 94 each year. Until 2015 it was mainly under the watchful eye of husband and wife team, Ann and Wayne Carran. Wayne had good reason to be involved in the avalanche control program– he was the one who survived the same avalanche which killed Robert Andrews.

There are 54 avalanche paths along the Milford Road and spring is the main avalanche season. The good weather we have had today, especially following a night or two of snow, means that the top layer often melts differentially and slides off the harder more compacted layers below.  When that looks likely to happen, the New Zealand Transport Agency closes the road in the evening and  literally ‘bombs’ avalanche sites which look unstable, so that they can’t do any harm.

Since my cruise isn’t until tomorrow, I tackle the three hour walk to Key Summit. It takes me a lot longer - it’s all uphill for around 900m, but the breathtaking views over the Darran and Humboldt Ranges, the deeply carved valleys and Mt. Christina and Lake Marion, are worth it. By the time I come back down, the Milford Road is closed again beyond this point, but the Hollyford Road remains open.  Though there isn't much daylight left, I make a quick dash to the end of the road where there’s another spectacular waterfall – the 275m Humboldt Falls, only twenty minutes from the road.  I then drive about halfway back to stay at Gunn’s Camp, which will put me within reasonable striking distance of Milford Sound in the morning if the road is open.