Things improve almost immediately. The hostel I stay in in Franz Joseph welcomes you with free bowls of hot soup on arrival and also has a free hot tub, though I use the opportunity to wash and dry my clothes instead.  The girl who shares my dorm is from Brisbane and we have a nice little ensuite, bar fridge and coffee making facilities in our room. The main lounge is a friendly place too.  Next morning, despite intermittent showers, I do the 6 Km walk to the glacier. You can see how far it has retreated, especially in the last decade. In 2008, glaciologists said that it would shrink a further 38% by 2100, but it looks like it’s way ahead of schedule. Still, the waterfalls along the way make up for the long walk across the rubble left behind.  They’d be famous in their own right if they weren’t being upstaged by a glacier. 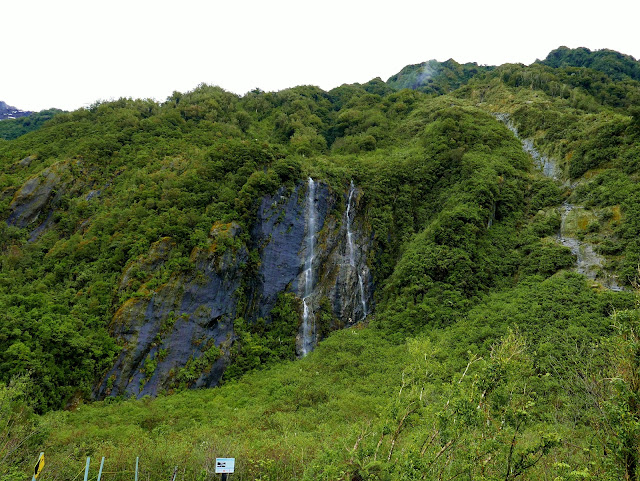 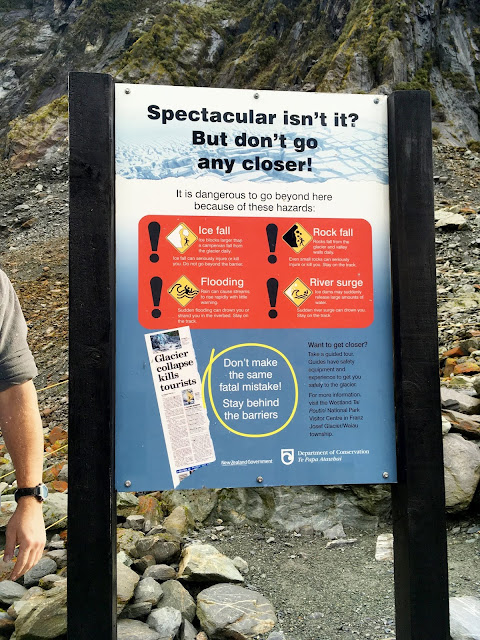 At the spot where the glacier ended in in 2009, there are barriers to stop you going beyond the moraine wall - the big heap of rocks pushed down by the glacier. It looks tantalisingly close though it’s almost another kilometre away. My nasty suspicious mind immediately jumps to the conclusion that this might be for commercial reasons, to keep the guides and helicopters in business, but there have been a number of deaths. In 2009, an ice wall collapsed on two Australian brothers who ignored the warning signs. Even with experienced guides there is a risk. A helicopter crashed in deteriorating weather at Fox Glacier in 2015, killing all nine people aboard. The DoC checks the weather daily and closes the track if there is too much rain or a risk of flooding or rock falls. As the Rankers website says, “Don’t be a dick and risk someone else’s life to save yours.” We could do with signs that say that around our National Parks too.

Cheeky Kea - mountain parrots, play to the crowd and do their best to undo the barrier ropes. They have been hailed as the smartest birds on the planet. Though there were once hundreds of thousands of them, there are now only an estimated 3000 to 7000 left and they are now regarded as endangered. One the reasons they are dying out is their fondness for junk food, so please don't feed them, no matter how friendly they are. Other reasons include collisions with cars, poisoning, being killed by introduced predators and a bill which lasted until 1971 whereby the government paid a bounty for dead Kea because it was thought that they were responsible for stock kills.

Despite the vagaries of the weather, I am glad I am here now and not in peak season. One of the reviews says that the track becomes a highway then and about one chopper a minute flies overhead.
I would have loved to stay longer in Franz Joseph to see the wild glow worms and try out the public hot pools, but afterwards it rains hard and I have a long way to go before my next stop.

For a glimpse of what Franz Joseph looks like from the air, weather permitting, check out the Jelly Journeys blog. It also has sunshine views of the Otir Gorge Viaduct, which I tackle next.