After Arrowtown, I head north as I am eager to see New Zealand’s glaciers. Mt. Aspiring National Park and South Westland as the area is known, also have high snow -covered mountains but in contrast to those parts of New Zealand that I have just visited, it is also a region of lakes, waterfalls and lush vegetation.  The first part, north of Arrowtown, is also former mining country, with Cardrona once the largest town in the region. However, since the closure of its mine, it has become a quiet rural backwater known mostly for its ski fields. The only reminders of its former glory are its historic pub, school house, Post Office, church and a meeting hall. The hotel remains one of the oldest in New Zealand. Its long serving publican James Patterson, who owned the pub from 1926 until his death in 1961, had an interesting take on road safety. Men travelling south over the Crown Range were only allowed one drink. Those travelling towards Wanaka were allowed two and he didn’t like serving women at all.

The next dot on the map, a larger one, is Wanaka. You could say it has been a tourist hub since the Maori used it as a summer base while crossing through to the south west in search of pounamu, the green translucent stone used for jewellery, gifts, tools and weapons.  Despite being surrounded by mountains, Wanaka’s huge lake, the fourth largest in New Zealand, acts as a moderating influence on what would otherwise be a harsh climate.

Europeans first settled in the region in the 1860s to establish sheep runs and to exploit its timber reserves, but the settlement soon began to attract anglers, hunters and sightseers who came by way of the Makarora River. In 1867 one Theodore Russell opened a hotel and from 1883 onwards a paddle steamer began to offer cruises on the Lake adding to its cachet as a tourist destination.  Wanaka has never looked back. Today it offers not only pubs, clubs, good shopping and restaurants and a range of activities such as rock climbing, boating and golf, but also easy access to ski fields and national parks. Good luck though if you want a parking spot in the CBD, near the Lake or near the hostel for that matter.

Well versed in the needs of tourists, Wanaka also boasts several moderately priced hostels. I pick the one that includes free breakfast and complimentary tea and coffee, though neither are anything to write home about. The hostel occupies several floors above a hotel and is full of seasoned travellers. I run into the usual suspects –Germans, a couple of Brits, Aussies and not one but two French chefs, but I am surprised at the number of South Americans I encounter. To date I have rarely met a Kiwi, neither Maori nor Pakeha.  Perhaps they are all in Australia –there were 518,000 of them in 2016, making them the second largest non – Australian ethnic group, after the UK born, though the Chinese and Indians weren’t far behind.  I do remember a sign at Christchurch airport in the 1980s saying, “Would the last New Zealander please turn off the light.”


Unfortunately the Rob Roy Glacier and Diamond Lake which I had planned to see, are off limits due to a landslip, so I explore some of the less populated inlets and then drive to beautiful Lake Hawea which meets Lake Wanaka at a narrow strip called the Neck. It is almost as large and practically deserted.  The next morning I have a second breakfast at one of several green rest areas, many of which also include lakes. The rest areas are all clean and well maintained, but my delight quickly turns to dismay as I discover that they are also well supplied with sandflies. Although I immediately apply Bushman Plus, I miss the bit around the edges of my shoes and the sandflies gather there in a black line like ants around a honey jar. The bites itch like crazy. Obviously I am one of those people which sandflies can’t resist, though a sign says they are also attracted to dark colours such as black and red in preference to say, lime or white.

The scenery changes now to myrtle forest that meets overhead, reminding me strongly of home. It’s the first time I’ve seen the rainforest here and note that there are several similar looking species, though it doesn’t appear to be as rich as ours. My next stop is at the Blue Pools. It is also the stop for everyone else, as there are no shoulders on these roads. Three stunning waterfalls follow and are mostly only a short walk from the road.  It’s hard to convey their size and power in a mere photograph. Also apparent is the enormous power of nature in the past. These wide valleys as well as Lake Wanaka and Lake Hawea have been neatly gouged out by glaciers during the Ice Ages, with the last one occurring between 18,000 and 20,000 years ago. Not that the mountains which tower over them aren’t trying, but the snow melt now only produces gigantic rivers which occasionally cause catastrophic floods. It is light refracting from glacial flour -tiny rock particles ground down by ice, which gives the rivers and lakes their intense blue colour.

Until I now I have been following the narrow Haast Pass Road squeezed between two mountain ranges  with Mt. Aspiring (3033m) and friends to my left and The Southern Alps, the knobbly white - capped backbone which runs the length of the South Island, to my right. This road, begun as a Depression era project in 1929, was not completed until 1965, though the tar seal wasn't finished until thirty years later. Suddenly the mountains on my left fall away and I find myself in the township of Haast Pass where am staying the night. There are no listed hostels for this region, but one of the motels offers backpacker facilities at somewhat higher prices than those which I have encountered so far.

As I am a couple of hours earlier than I expected, I take a side trip to the beach where I am immediately sandblasted by the Roaring Forties sweeping off the Tasman Sea. The beach seems strangely incongruous after all those mountains, but it is here that softer rock enabled the Haast Glacier to break through, smoothing out the land on its way. However, it’s not just the terrain that’s different. This is farming, hunting and fishing territory.

My companions in the kitchen that night are mostly New Zealanders. There are signs around the walls saying “Don’t gut your fish in here.”  The pub up the road, well –patronised by noisy motorcyclists, lays on venison, not lattes with soy milk and gluten-free wraps. The group at the next table appear to be professional fishermen, which they decline to confirm or deny, while those at my table are a group of gentlemen farmers, among them the Mayor of Oamaru on the East Coast, up for a boy’s weekend of whitebaiting. Whitebaiting is a popular New Zealand pastime. It involves netting the fingerlings of several species and turning them into fritters which are a local specialty. 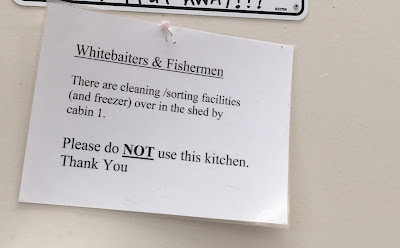 The hostel doesn’t seem to have a very high opinion of backpackers. My dorm room window looks out onto the washing machines in the laundry and there are signs everywhere imploring you not to steal the cutlery and saying things like “Clean up the kitchen after yourself” and “ You only have five minutes in the shower,” with the promise of a shot of cold water as a warning after four minutes. I don’t even get half that and suspect that I only got the last minute of someone else’s. Still, you could say I had a kind of revenge. 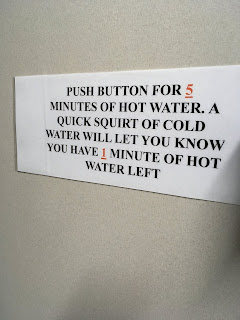 I accidentally left my dorm key in the room and locked myself out, but didn’t find this out until shortly before midnight when I had finished talking to the other guests. I then had to phone Mine Host to let me in, which he did in a somewhat disgruntled fashion since I probably had to get him out of bed. I wake up a bit disgruntled myself in the morning. The weather is grey and drizzly and my sandfly bites have come up in red welts that make me look as if I have a nasty disease, but glaciers beckon, so there’s no time to linger or complain.