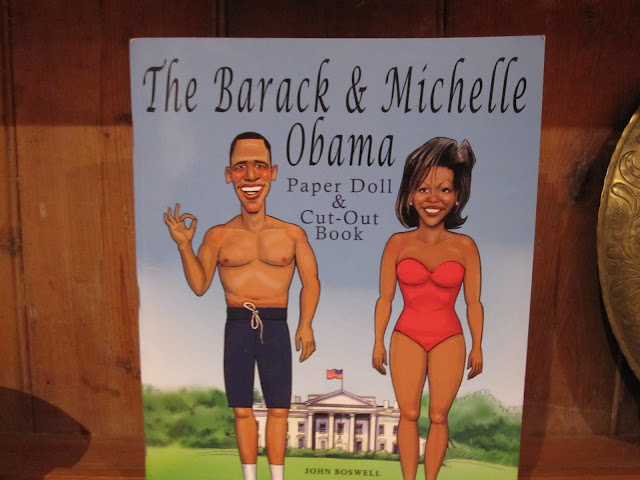 Apart from the washing machine debacle, had a rather nice day. Called into a discount shop to buy a few things for the van and was absolutely delighted with some of the weird and wonderful products on display. It's like entering Aladdin's cave and you just never know what you 'll find.

No disrespect to my American friends, but I couldn’t resist the Barack and Michelle Paper Dress Up Dolls. Someone is going to get those for Christmas, so don’t say you haven’t been warned. Then there was the Placental Shampoo. I thought it was one of those unfortunate marketing failures, where manufacturers don’t know what something means in another country, but on reading the labels, it did actually contain placental extract to replenish damaged hair. The question now is whose?  I put that one back, also the drinking hat.
I have been after a safety helmet for a while as you now need them to go caving. It really irks me having to buy one, when we always had these lying around the house, along with earplugs. While these do have a certain utility - just look at all the uses, I am not sure if they would meet safety standards for caving and no Aussie would want a rock falling on their stubbies.

One of the things that I had come in for, was a stiff brush to clean my boots after walking in the bush so I didn’t spread that fungus around. This is what I found.
Cultural Differences

I also bought washing up brushes. They were at least called pot and pan brushes.  In South Korea these are used to clean toilets. I found this out when my students were tittering uncontrollably when they saw me use one in the sink. Luckily I had bought it myself and knew it had never been used for anything else.


My other purchases were less controversial - some lovely boxes; a compact dynamo torch for when all those cheap batteries fail; an ocean scented (?) reed diffuser and some cheap art materials. I always have to buy cheap art materials or I am too intimidated to use them. Same goes for beautiful journals and diaries. [Finally someone has come up with the sort I need, though mostly I use school exercise books - Check out the one by Keri Smith. It is all stuck with masking tape and already has scribbles in it - perfect!]. I can't believe my luck, being able to buy so much junk and still getting change out of $30.
There is just a twinge of guilt about wasting the earth's scarce resources, contributing to landfill and global warming, possibly encouraging slave labour etc. etc. so I try not to go there too often, but today I feel like a kid at a country fair who's been given enough pocket money to buy show bags.
Email Post