*Not sure if that refers to the sound your hard hat makes when your head hits an overhang or the sound you make when you fall in the water.

Spelunking is about exploring caves. While Tasmania has many beautiful public caves which you can visit in perfect safety, we have gone to a wild cave in the World Heritage Area just south of Ida Bay.


Mystery Cave as it is called, will have to stay a bit of a mystery because my flash didn’t work inside the cave and the cave creatures that live in it  don’t like too much light and noise.

It was rather exciting in that way where you are really nervous the whole time and quite relieved when it’s over, but afterwards it feels as if you have had a fantastic adventure. It does really make the adrenalin flow. People have perished on this trip too–  most recently a party of  High School girls and their teacher when the waters rose unexpectedly, so it’s another one of those places where you have to take extreme care and, although it’s against my religion, even I went with other people on this one.

If getting everyone together in one place all at the same time is one problem - worse than herding cats, then getting the right weather is another. Good weather is not really essential when you are in the cave, but you do have to wait for at least 48 hours after the last rain because the creek runs through the entire cave system. Do check with Park rangers at Hastings Caves to make sure it’s safe before entering and be sure to sign the intentions book on the way in. 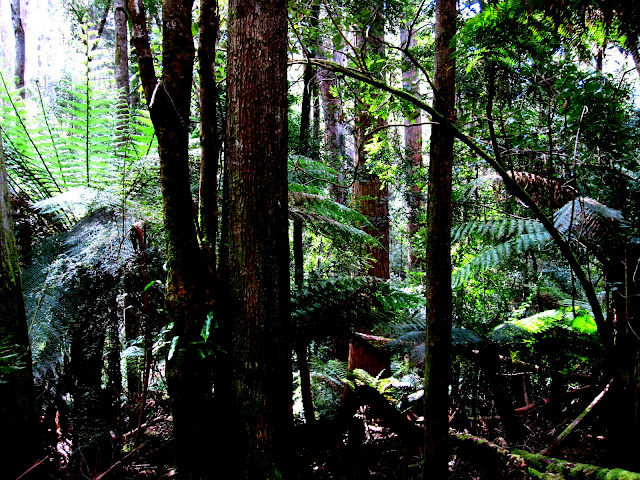 One of the reasons it took so long to get going was because we had to make  a stop at the hardware shop to make sure everyone had the necessary gear – safety helmets, cap lamps, gumboots, breakfast, spare torches, Parks passes and permission, warm and cool clothing  – it’s generally only 9 -10o C in the cave, but it was quite warm while walking to it.
The walk through the rainforest was lovely – beautiful ferns and mosses, occasional sassafras and myrtle, and laurels and leatherwood about to burst into flower. It follows an old tramway where limestone was taken from a quarry and here and there you come upon evidence  of its former life – a rusting boiler, a couple of buckets, a rail here and there and an odd collection of hob nailed boots  and bottles left at what was once a camp by the river. It’s a lovely day today and nature has reclaimed most of it and covered it in moss, but it’s a poignant reminder of how hard life must have been before we had chainsaws and log trucks. Were it not for logging and mining, many of these sites would never have been discovered

The approach to the cave is simply awesome. Then it’s a muddy scramble of about 100 metres down to the entrance and then down about another 1- 200 metres  inside the cave.  It’s not at all claustrophobic because this is not one cave, but a series of chambers with very high ceilings. There are lots of twists and turns where you cross and recross the creek so a lot of the time you are so busy watching your feet that you don’t slip in, that you can hardly take in the surroundings. That why you need helmets, because while you are doing that, its quite easy to bump your head while looking down in the narrow beam of the cap lamps.


The formations are not as spectacular as in the caves at Mole Creek or at Hastings Caves but the glow worms are absolutely astounding. According to Nell Tyson and Annie Rushton in their “The Family Bushwalks in Tasmania's Huon Valley” book they were regarded as one of the finest displays in the world and were reported in the Scientific American as far back as 1895. Certainly, when you turn your cap lamp off and look up, it’s like looking into the Milky Way. There is a whole universe up there but there are also isolated ones along the walls.  I have tried taking pictures of these, but just turning  the camera on made too much light to see them. I did manage to get a picture of a cave spider with its enormous span – its legs longer than my fingers. 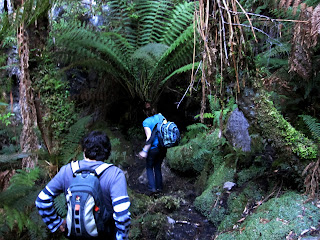 Not sure how long we plodded about and splashed around in there. Today the water was only ankle deep, but it can rise very suddenly. It would probably be a great place to spend an Ice Age or two. There's plenty of white pigment for cave drawing at hand, but I wasn’t too sorry when one of our party wanted to call it a day. I wasn’t looking forward to scrambling back up to track level in the dark myself.
It was hard to believe that despite daylight saving, it was almost dusk when we emerged.  I am pleased to report that, apart from almost running out of fuel because everything from Ida Bay to Huonville was closed, we survived an entire day without any mishaps at all.
At the time of writing, there is still a twenty four hour service station at Huonville.