A Day of Sunshine and Flowers
It was another beautiful day and I had planned to do another longish walk to Cape Raoul today, but the pain in the back of my legs soon convinced me that it might be a great day for a bit of sightseeing instead. After visiting some pleasant sleepy inlets like Lady’s Bay, where the women used to bathe, I found myself at the entrance to Remarkable Cave at the end of a sealed road a few kilometres from Port Arthur. The seaviews and cliffs alone would make this worthwhile, but it's another opportunity to marvel at the relentless forces of nature.
Stonewash anyone? The last walkway was washed away
A walk in Nature's Seaside Garden.


Climbing back up the stairs from Remarkable Cave almost kills me, so I am glad that the walk to the Blowhole is fairly easy. If you were wondering what to plant in your seaside garden, you could get some great ideas here.  Don’t take or tread on the plants though! They are the only thing holding these ancient dunes together. These huge mounds were deposited during past ice ages, 12,000, 65,000 and 185,000 years ago when sea levels were lower and winds were stronger than they are now.
The view westwards is awesome as well. The cliffs of Cape Raoul which you can see in the distance are over 300 metres high and among the highest sea cliffs in the world. Alongside the track are some of the rarest flowers in the world. Australia has over 25,000 species - compared to Europe's  mere 1,600 and many are still being discovered, not necessarily small ones either. The Woollemi Pine for instance, a tree long thought to be extinct, is over 130 metres tall and was discovered in the Blue Mountains near Sydney in 1994. The West Coast is also full of unusual plants and animals, many of which have yet to be named. Youngest son is still waiting to find out if he is going to have a wolf spider named after him. I am not very familar with coastal vegetation, so I am trying to have some identified. This is just the tiniest sample.

* If you are really interested in native plants there’s a nursery that specialises in them and sometimes has a stall at the market  TAZ Wild Plants, Epping Forest, Tas 7211, Email: Bonneys.Plains@tassie.net.au

leaves to protect them from the fierce salt winds
After about three quarters of an hour of pleasant walking I come upon the the Blowhole.The Maingon Blowhole turned out to be a great rumbling, gurgling gash in the earth, so deep that I couldn’t see the water. It made me think of a brilliantly named cave in Tasmania - The Growling Swallet. You expect that at any moment something large and grotesque is about to reach out and eat you whole. Again, this is unfenced and there is a sign warning about making sure that any children are well supervised. 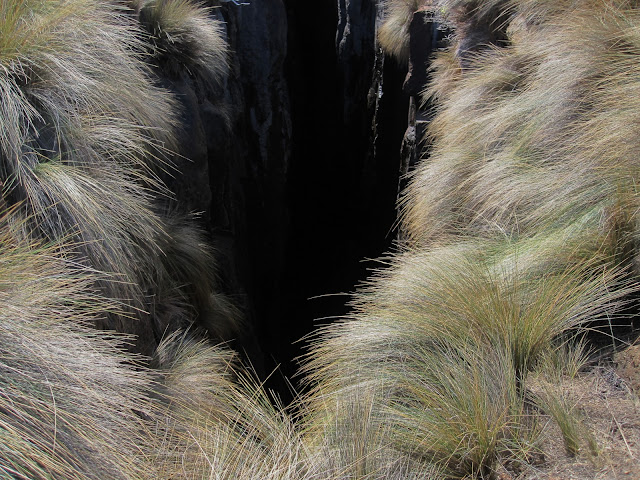 Speaking of names, I suppose we should be grateful that the French named so many features, or we would have more short sharp Anglo - Saxon names (which may or may not tell it like it is) e.g. Stinking Bay, Dog Bark, Purgatory Hill, Perdition Plateau, Hurricane Heath and Desolation Gully, to name just a few on this map. I suppose they weren’t thinking of real estate values when they named them. The views of early visitors were no doubt coloured by the fact that most were involuntary guests of her Majesty and were very likely not in the mood to appreciate the scenery while cutting and hauling timber by hand or pulling train carriages manually over hills and swamps.
On the other hand, there’s nothing worse than coming to a place with a romantic name, only to discover that it’s the local tip, the crime capital of the Western world or just plain ugly. Alas, I never did get a chance to see Lovely Bottom which is also on my map. I did however, pass some more serene looking beaches, tall timber and some delightful rustic looking scenery on my way west and south. At the end of a long stretch of dirt road I come to the start of the Cape Raoul Track. 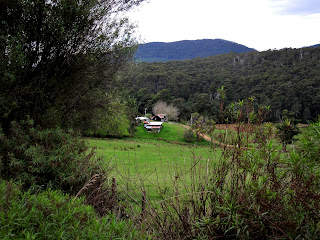 Mirage
Andy, the man who owns the property nearby, kindly lets me camp there for a small fee and wonder of wonders, fires up the sauna for me. He’s building a beautiful mudbrick house for a B and B not unlike our old house in the bush, but don't expect to come and stay soon. He’s been working on it for five years already, but his workmanship is exquisite and it will be a work of art when it’s finished. Meanwhile, the sauna is just what the doctor ordered.


The flushing toilet is also welcome, but you must admit that the old one had a certain charm, and definitely a better view. 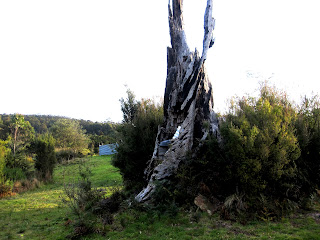