"It is said that visiting Mount Elbrus makes you strong"
-Does that still count if you take a chairlift? 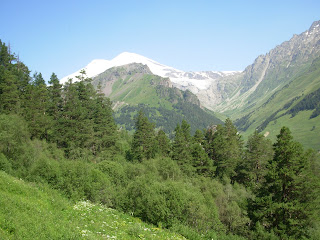 That's Mount Elbrus with the two horned peaks - Real "Sound of Music" Scenery
I took a bus trip to Mt. Elbrus. It seemed very cheap at only $15 for the whole day including a three or four hour drive each way. It was only when I got there that I discovered that the chairlifts to get up it were about $10 for each thousand metres, but by that time it was a bit late to change my mind and I could afford all but the last little bit. I had a lovely translator on the bus  - red haired Vera from Karelia who looked a lot like Bridget Jones in the film Bridget Jones's Diary. Sorry, can't find your picture at the moment Vera, but I'll put it in when I find out where it went).

This is Vera! (She just sent me a photo of the two of us).
Thanks Vera!
The way there was spectacular enough with great stone outcrops overlooking the gorge we drove along. Catherine the Great had fortresses built all along here to keep out the troublesome neighbours. They were also the setting for a typically Russian romantic tragedy. The story goes that a girl from a wealthy family fell in love with a poor boy, but her family wanted her to marry a rich old man so they decided to jump to their death from one of the cliffs instead. The boy jumped but the girl  hestitated and changed her mind after seeing his body and ended up marrying the rich old man instead. Lermontov has a cliff named after him here too. The one which he used in the duel scene. 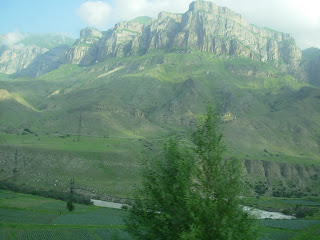 On the way to Elbrus- not a great picture. I took it from the bus 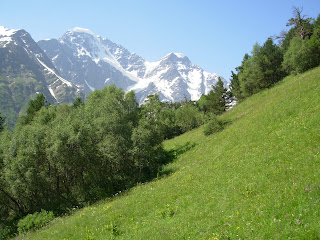 Mt. Cheget - about a thousand feet lower than Elbrus.
To get you warmed up - i.e. to make sure you didn't drop dead of altitude sickness, the tour operators first take you to Mt. Cheget - a mere 3040 metres. It was incredibly beautiful and carpeted with alpine flowers - pinks, big bluebells, soft white spider -like flowers and blue and purple spikes, as well as the first gentian I'd seen in decades. All around were the stunning peaks that form the border between continents and between Russia and Georgia, Abkhazia and Azerbaijan.


I have to make a confession here. Although I have always opposed chairlifts on Mt. Wellington because the infrastucture would despoil the view, I did really enjoy zooming up thousands of metres, though I was a bit nervous at first. Russians were so blase about it all, carrying babies and bags loosely on their laps, often without even room to do up the safety chain while we soared over valleys and treetops, then sharp rocks and glaciers. I was also a bit worried about health and safety issues as there were no limits on the number of people allowed into the cable car at Dombay and a young man had to hold the doors shut so no -one fell out. My second adrenalin rush for the day!

Because we were above the treeline on the ride up to Mt. Elbrus, I didn't find it nearly as attractive as the scenery on Mt. Cheget - stunning yes, but harsh, so I was not too sorry that I couldn't  do the last few metres. 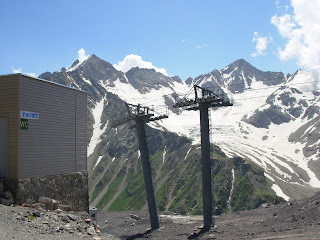 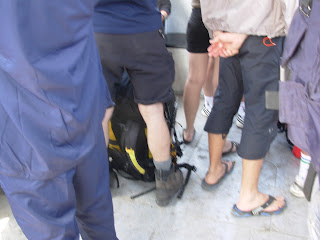 It has always been Albert's (Tomsk) dream to climb Mount Elbrus and he has been training for it for years. Real climbers deplore people like these who just jump on the chairlifts and walk the last few metres. Sorry, I  had to cheat Albert, but I only had a couple of months to see the whole of Russia and just running for the chairlift almost killed me! 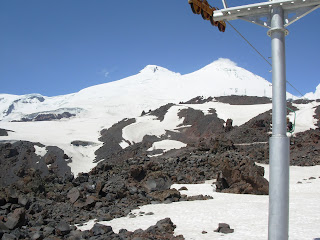 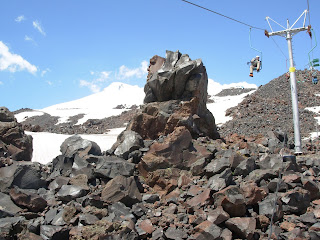 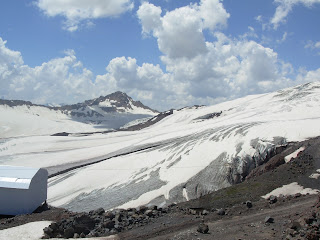 The ice sheets here are supposed to be hundreds of feet thick. The guide said that these glaciers have not yet shown sign of retreat. If so, it must be the only place on earth that they aren't. 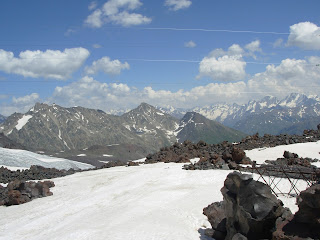 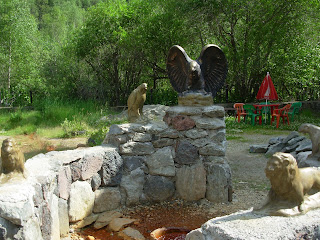 Dombay -Another Day Another Mountain
When I told the tour organiser how much I had enjoyed the flowers at Cheget, he insisted that I come with them to Dombay as well. Different valley, same deal -cheap bus fares, expensive chairlifts. It was another lovely day and this time Yana, a student from Pyatigorsk translated for me. 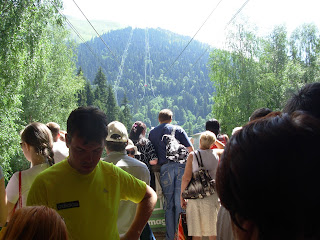 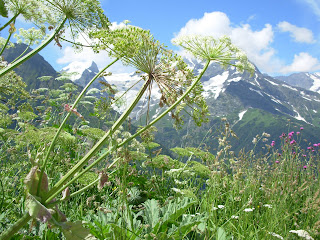 The vegetation was lusher here than at Cheget and in the village at the top of  the chairlift I found something very like comfrey, except that it had deep blue flowers. I had always found comfrey to be very good for bruises, sprains and broken bones, so thinking I might use it on my foot, I asked one of the ladies who sold herbs if they ever used this plant for that kind of thing. She looked at me blankly. Then she said, "No, we just go to the pharmacy." 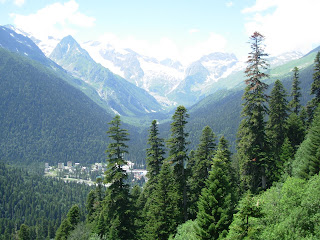 View from the Top
Everywhere people were posing for their "Here's me at such - and  -such photos."  Russians are even worse than the Japanese when it comes to that kind of thing and couldn't understand that I wasn't desperate to have my photo taken. I wandered around for a while trying to get an untrammelled view of the mountains and suddenly realised I was starving. I had had no breakfast and this bus didn't make the usual snack stops on the way. The  aroma of shashlik being cooked filled the air. I counted my change. I had 100 roubles (about $3) left after the chairlift and the shashlik was 200 roubles a serve. I asked the shashlik seller if I could have a half one and was a bit disappointed when he said "No."
A little while later, he came with an enormous skewer of meat complete with all the trimmings, bread, onions, sauce and fresh herbs. Nor would he take one rouble for it. It was utterly delicious and the first real meal I had had since I accidently ordered two meals at Krasnoyarsk. I'll put his card in here when I can find it again as I would thoroughly recommend him! 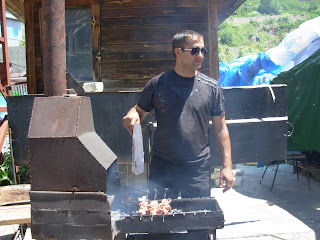 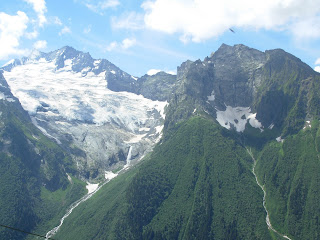 Then it was a three chairlift ride back down to the village where I couldn't find my 'group' or my bus. This lovely man drove me around for hours looking at the identical buses until we found it. 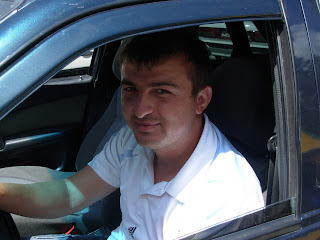 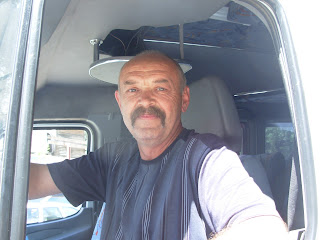 The bus driver insisted that take his photo too.
I was just thinking how much I disliked organised tours. If I had had my way, I would have been walking in the woods, picking strawberries and sticking my feet into those cool glacial streams, when lo and behold, the bus stopped at one of the streams that came tumbling down the mountains and I even managed to find a few wild strawberries. 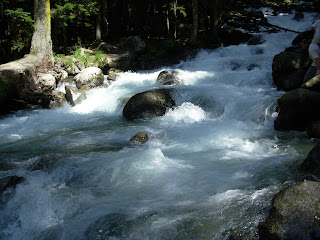 Thank you everyone, for two lovely days.
Email Post