Another Night - Another Monastery - Hope this doesn't become a habit! 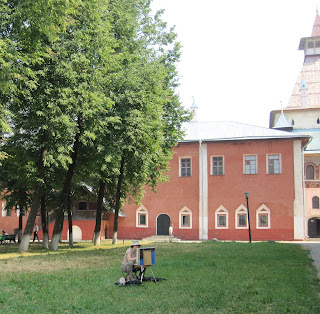 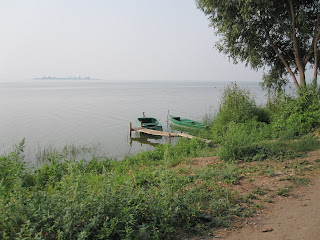 
After a hot and sweaty bus ride, it was a long walk to the Kremlin. A young girl called Katya helped carry my bags and walked me all the way.I was really grateful because by now both my foot and my back were hurting. I was glad that I had sent my boots and winter clothes back to Australia! I mentioned to Katya that I was looking forward to having a swim in shimmering Lake Nero.
"I wouldn't," she said. "It's much too polluted!"


Rostov Veliky was even older than Suzdal having been first chronicled in 862 (Lonely Planet, 2006: 217).  The guest house in the old monastery here proved friendly and didn’t charge the earth and so it was a great place to rest.Though many of its churches were in the process of renovation and plaster was crumbling here and there, there was plenty of evidence of Rostov's past and future glory. There was a similarly imposing constellation of belltowers, cathedrals and artists. Even I wanted to draw here! It also had trading arches and you could almost see where the idea of arcades and malls originated. 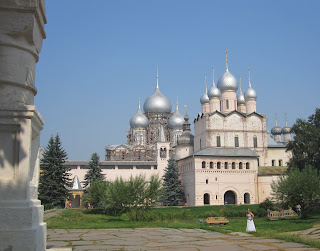 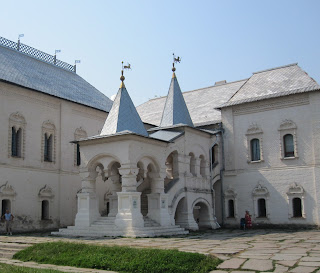 A wealth of churches 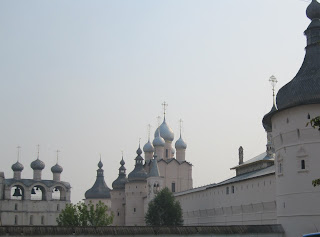 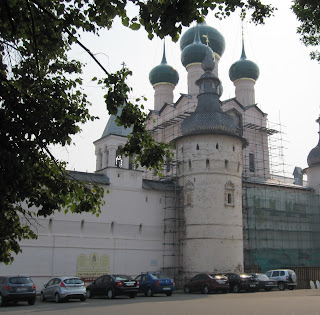 Renovations were in progress everywhere 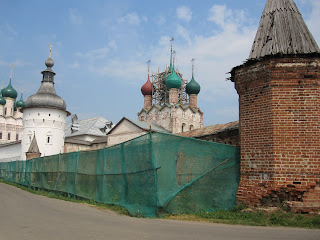 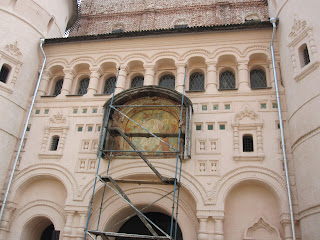 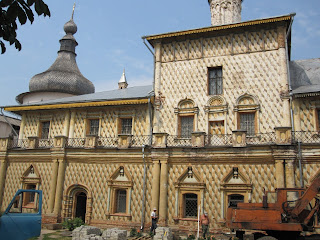 Yes, that's a bulldozer on the right! 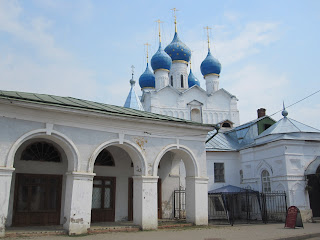 There were also Trading Arches
Near the lake I visited an unusual little gallery and museum that belonged to local artist Mikhail Selishchev who does large enamel pieces. Enamel work generally is big in Rostov and the market stalls opposite the Kremlin were full of enamel jewellery. 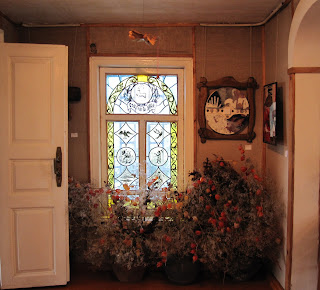 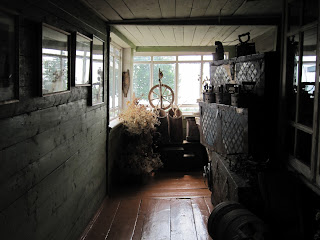 House Museums are not just for the dear departed
In the shade of the monastery garden, I also met a local writer and retired engineer who wanted me to find someone in Australia who could translate his book. I wish I could have - Any offers? -but the chances of finding someone who could speak Russian well were fairly slim and the book was rather heavy, so I had to leave it behind. He did take me to lunch though and I had a chance to try two new things. O!kpowka, a kind of salad topped with either kvass, water or kefir (buttermilk) and also Taraxicum, a green cordial with a pear flavour, both welcome on these steaming hot days and we finished off with icecream. 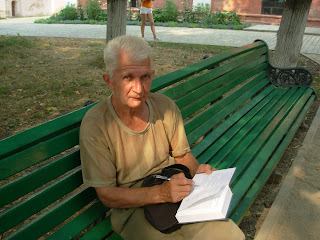 My next mission was to try to go to Staraya Russia, Dostoevsky’s old home town, without going back to Moscow, the obvious route and the way everyone told me to go, and then taking the train back out. I was discussing this  at the bus depot with Dennis, a young cyclist from Moscow, who immediately rode his bike back into town, about five kilometres away just to get me a map. He came back with a rather expensive road atlas which he would not let me pay for. Once again, I was constantly amazed at the friendliness and open -heartedness of ordinary people in Russia. 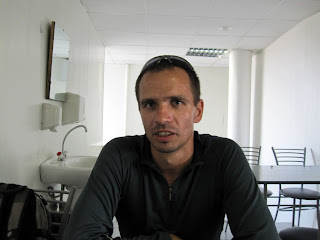 Dennis from Moscow
Indeed, there was a devious route involving various buses and trains, via Ivanov and Yaroslav. I welcomed the chance to see more of the country –side, smoky as it was, rather than another big city. Uglich, which I passed through, had a pretty red kremlin and enormous river boats, but the rest of this journey was a bit of a blur, a heat shimmer perhaps. Even the people on the train were languid and uncommunicative, but then again, by this time, maybe it was me. 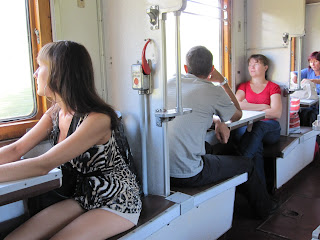 Many Thanks to all the people who were so kind to this random stranger!

May it come back to you in spades