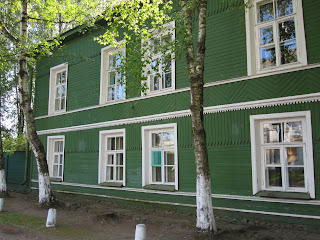 
This is only a short post, because I could only stay for a couple of hours. There was simply nowhere to stay.Venera, a lovely lady whom I had asked for directions, walked me from one accommodation place to another and all the way to Dostoevsky’s house. I'm not sure that she didn't ring them specially to have it opened. 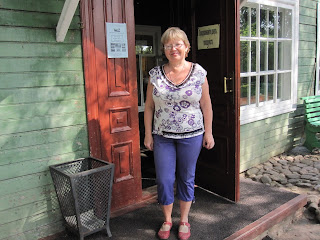 Venera tried to find me accommodation and showed me around
This house had remained in Dostoevsky's family before it was turned into a museum, so it still contained many personal items including his writing desk and photos of his family and friends. There were also pictures of those who inspired him, such as Byron and Dickens above his desk and a delightful view of the tree –lined river beyond. It also had a lovely garden. I am sure it didn’t look all that different in Dostoevsky’s day  when he wrote The Brothers Karamazov here. Although I had the benefit of Venera's translation, this little museum had the good sense to hand out notes in English. 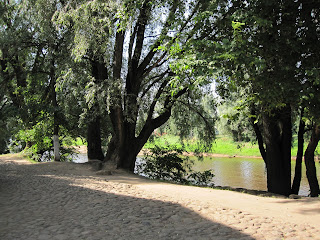 The view from the window in his study 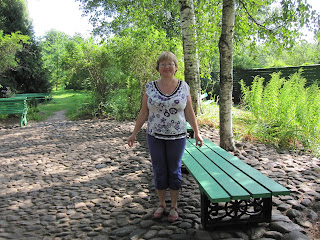 The garden
We were going to visit an art gallery, but this was closed at the time, so we wandered past the pretty red kremlin  and finished off with a light Russian lunch before I hastened to catch another grimy local bus. 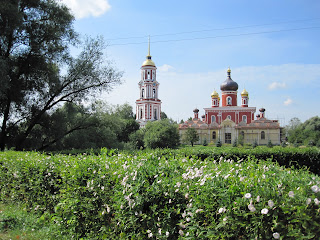 Bus stations are the poor cousins of the railway stations. The only thing I could find to eat was a deep fried greasy thing which turned out to have greenish grey minced liver inside. I only had a couple of bites, but felt quite queasy afterwards. 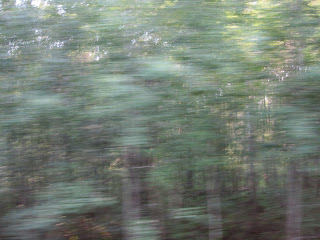 My plan was to spend a little time in Novrogod three hours south of St. Petersburg where Viking princes had established the first settlement in the 9th Century, but by the time I got there I was so exhausted and kremlinned –out, that I really couldn’t bear to see another one. With the train station right next to the bus depot, I headed straight for the train.  At the station, a small team of archeologists returning from a dig helped me to buy a ticket and shared their food and drink with me. Robert was from Portugal, lived in Italy and worked in Russia. Saddy and Vitalik were students. Only Vitalik spoke a little English, but it hardly mattered. They were exhausted too and quickly fell asleep on the hard benches for the three hour trip to St. Petersburg. When we arrived, they picked up my pack and assorted bags – one was always for the inordinate amount of water you needed, and escorted me by subway all the way to the hostel. It was a great introduction to a really crazy city.
at November 20, 2010