An unexpected meeting with a friend, rural tranquility and gilded splendour in Sergei Possad 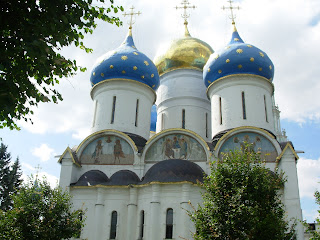 I thought I was on my way to to Kazan when I suddenly found out late at night, that my ticket was only to a little place called Rhizan, three hours from Moscow. Thought it had been a bit too easy and a bit too cheap. What to do now? Panic!
Luckily I had a friend called Alex, who lived just out of Moscow whom I had met in Mongolia.The trouble was that he didn’t speak English and we had communicated only via our respective phrase books.  Natasha, a girl in my compartment who happened to be a language teacher in Moscow, gave him a ring and told him the problem.  “No problem,” said Alex  to Natasha and agreed to collect me from the station in Moscow. 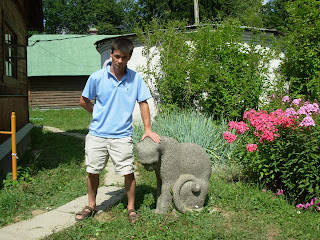 The ladies in my compartment, who had already rescued me during the night from the clutches of two policemen demanding to see my passport, calculated the exact price which it should have cost to go through to Moscow, much less than the provodista originally wanted, and I was on my way.
Alex and girlfriend Natasha's house (different Natasha  - I know about five by now!), around 40 km north -east of Moscow is modest and like much of Russia apparently, in the throes of renovation, but it is set among apple trees and sunflowers and rather romantic. It's exactly the kind of rustic landscape that had inspired countless Russian painters, musicians and writers and far from the frantic life of a city that has four hour traffic jams. 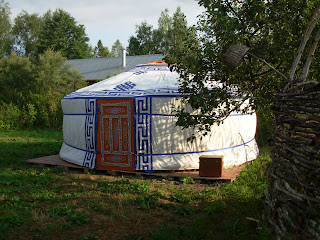 The Ger
Alex’s reason for being in Mongolia when we met was to buy an authentic ger so that he could offer rustic tourist accommodation in the quiet of the countryside. Now decked out with a double bed, thick doona and patterned rugs, I felt very honoured to be the first person to sleep in it. First though we had a wonderful meal of pelmini, served with sour cream and a salad made mostly from vegetables straight from the garden. Pelmini are like small ravioli filled with either meat or cheese and potatoes. I was to eat them often later in St. Petersburg. Delicious! Perhaps I am secretly a Russian.

In glorious sunshine after a breakfast of millet porridge, Alex took me to nearby Abramtsevo estate. This was an artists' colony started in 1870 by former railway tycoon Savva Mamontov. Many famous artists had passed through here including portrait painter Illya Repin and ceramicist Mikhail Vrubel. The former manor house is now a museum with exquisitely carved furniture and famous paintings created by the artists who stayed there, while the bathhouse features folk arts such as weaving.

As with the museum in Tobolsk, everything is guarded by an army of attendants - the babuashkas, and most exhibits are roped off. The gardens though are still delightful especially in this hot summer and so was the little chapel in which everything from the spire by Vrubel to the icons and vestry weavings inside, was handmade by the artists themselves. Mammatov’s wife was no slouch either, collecting artworks and ancient sculptures in her own right. My one regret was that that it was now a museum and no longer a living, breathing place for artists. That was, until I came upon a man painting a picture outside and proving that the surroundings still had the capacity to inspire contemporary artists and Mamontov’s legacy lives on. 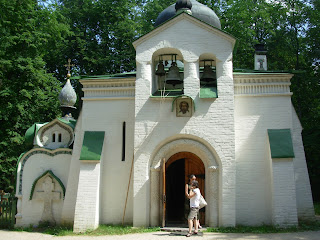 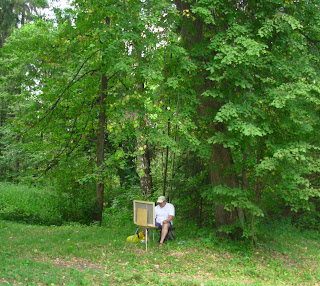 I was pleased to see at least one living artist carrying on the tradition of this artist's colony
Later in the day we went on to Sergei Possad, one of the Golden Ring towns which was also close by. Having been the adminstrative centre of the Russian Orthodox Church until 1998, it has an amazing concentration of gilded cathedrals and frescoes and a large number of pilgrims and tourists. There were several weddings in progress while we were there, but despite all the turmoil, the life of the Church continued with monks looking Rasputin –like in black robes and beards, tending the flock or spending time in quiet reflection behind the gates of the monasteries. 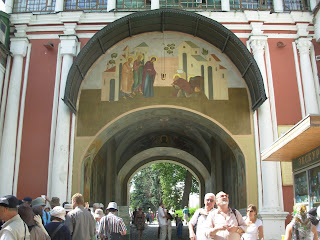 Entrance to Sergei Possad, Centre of the Russian Orthodox Church. Note the beautiful frescoes and the crowds! 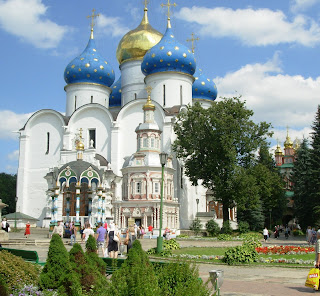 There were churches to the right...... 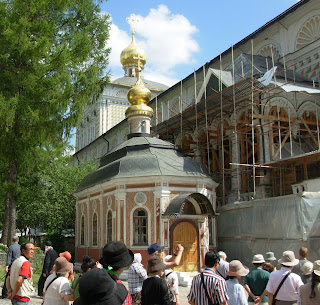 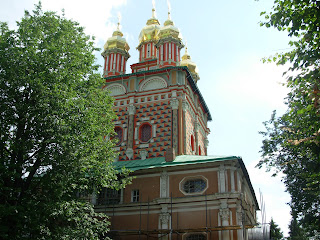 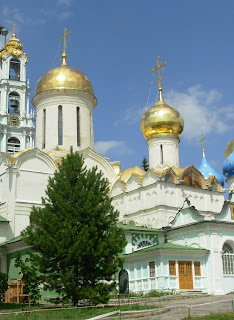 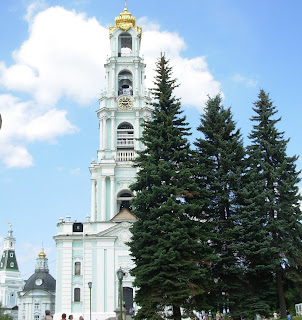 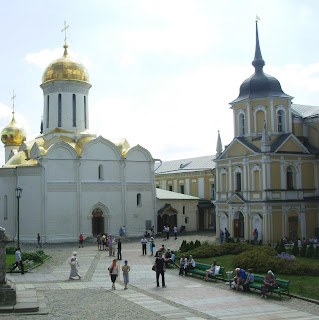 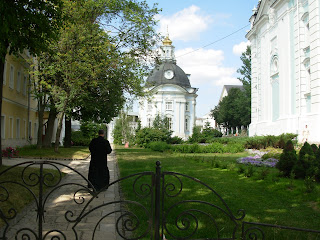 .... but there were still a few quiet places where the monks could go about their business 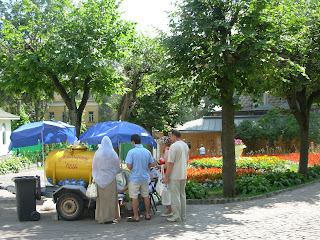 Alex getting a different kind of Holy Water. Relax. It's Kvass. Another popular Russian drink made from fermented Rye Bread. It tastes like beer and looks like Guinness or Coke but is in fact non-alcoholic and very refreshing on a hot day. Everyone drinks it, especially bus drivers and I am surprised we have never heard of it outside Russia.
Meanwhile, my three days were almost up at Aleshoy’s and he also had to return to work, so he put me on the fast train to the city and arranged for me to stay in a hostel. To my astonishment, young men were hitching rides on the back of most of the trains travelling in the opposite direction, but I was a bit too slow with my camera to catch them.
Thanks Alex and Natasha for a GREAT time! By the way Alex, I did end up buying one of the chicken- pecking toys you showed  me, before I left Russia, though I am not sure it was as well made as those in Sergei Possad.
PS If you would like to stay in the ger, email me, and I'll give you Alex’s email. Same goes for the Guest House in Pyatigorsk, the Hostel in Mongolia or any other places I have stayed.
Email Post