Pyatigorsk - It must be something in the water

“Those who find love at the foot of Mt. Mashuk will have it for the rest of their lives.” 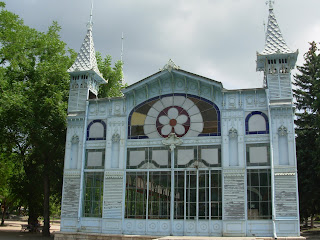 The Lermontov Baths  in Pyatigorsk- now a theatre since this spring ran dry
Pyatigorsk in the mineral waters area of southern Russia, was a marvellous discovery and remains one of my favourite places. I had wanted to get out of the cities and see a bit of the countryside – touch the earth as it were, rather than see it through train windows as you do on the Trans Sib, but few of my Russian friends could suggest places to visit. Yes, they had been to Moscow and St. Petersburg and maybe even to Beijing, or Poland, but they had done very little travelling within their own country. In fact, I had probably seen more of it than they had. The trip down was a trial. There were very few seats on the trains and it got hotter and hotter the further south I went. As the country flattened out around the Volga, there were enormous fields of glorious sunflowers (lots of Sametchky there!) and the opulent gilded domes of the Russian Orthodox church gave way to the slender silver spires of Islam.
There weren’t many foreign tourists here – in fact, I was such a novelty that people who weren’t asking “where is your group?”  kept insisting on taking my photo and calling me a hero, especially the women. However, Pyatigorsk is well known to Muscovites as a spa town. When wounded soldiers were sent here in the late C18th they were found to recover more quickly and soon it became a popular place for the rich and famous to spend their holidays. Big sanatoria, drinking galleries and bath houses developed and the place was pleasantly landscaped. 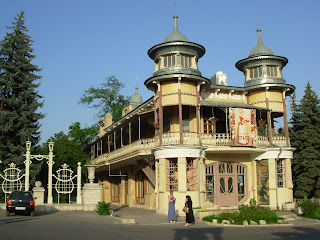 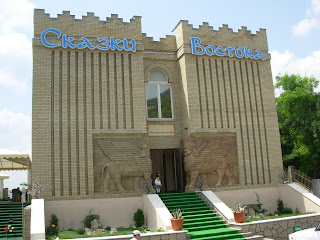 Egyptian baths - now a restaurant
There are follies and grottos and leafy walks and whimsical buildings and over it all hangs the shadow of the writer Lermantov whose own life ended here and embodied the proper sense of Russian tragedy. After setting his novel Princess Mary (A Hero of our Time in Angleski) here about a young man who steals another man’s beloved and ends up being killed in a duel, Lermontov himself was killed in a duel in the same town. While he fired into the air, not wishing to kill anyone, he was shot in the heart. 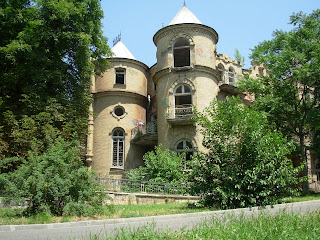 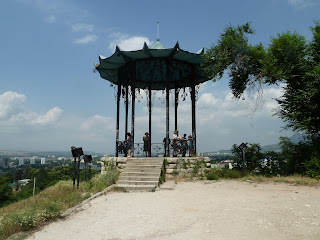 The Chinese Pavillion - German's Photo
Many believe that it was part of a conspiracy, the same one which got his friend the famous writer Pushkin killed in a similar manner, because he dared to criticise the regime. Lermontov in turn pointed this out and was first banished to the Caucasus to fight in the army, but also died in a duel shortly after finishing his wildly successful novel which had a profound influence on  Russian literature. Pyatigorsk was popular with other literary figures such as Tolstoy as well. My landlady told me that the Australian writer, Alan Marshall of "I can Jump Puddles" fame, also stayed in Pyatigorsk, so I hope something rubs off. 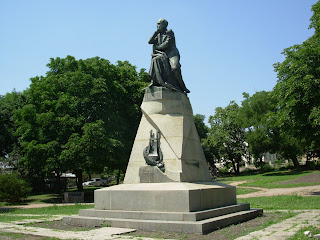 There is another literary giant here, though a fictional one. It is Ippolit Matveyevich the mild mannered hero of Ilya Ilf and Eugene Petrov's play "The Twelve Chairs" which is also set in Pyatigorsk. He appears at the entrance to the famous Flower Garden near the Lermontov Gallery just as he does in the play and is much hugged and photographed. He also appears in one of the cafes  and his dodgy friend Ostap Bender, holds court outside Proval.
It's a great pity that this book is out of print, because it shows a much lighter side of Russian literature than we westerners usually see and also tells quite a lot about the flavour of the times and the place.
This is the tiniest excerpt from Chapter 36 sent to me by my friend German Esipov:

"What a  remarkable thing,"  mused  Ostap, "that  the  town  has  never
thought  of charging ten kopeks  to see the Drop.  It seems to  be the  only
place where the people of Pyatigorsk  allow  the sightseers  in free. I will
remove that  blemish on  the town's escutcheon and  rectify the  regrettable
omission....." 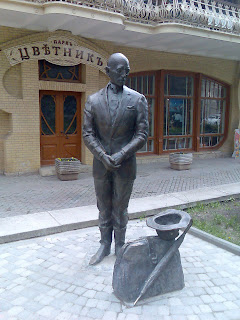 "Pussy"   Ippolit Matveevich, adored subject of a popular play set in Pyatigorsk,
stands at the entrance to the
the Flower Garden
- German's Photo
Traditionally Pyatigorsk was a place where the young ladies of Moscow strutted their stuff and found husbands at the many balls and social gatherings. These days, Russians still promenade in their finery as they did in Lermontov’s day and it is a place where many get married. You can hear fireworks almost every night to prove it. 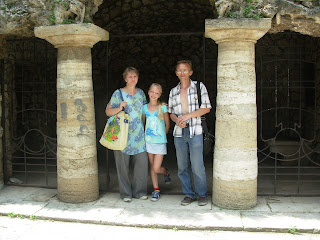 I didn’t meet the love of my life in Pyatigorsk alas, unless we are talking about love of place, atmosphere and people like Natasha who ran the guest house or the Esipov family who adopted me and insisted on showing me around without letting me pay for anything, not even an ice cream for their daughter. They bought me one instead and also a charger for my damnable Nokia. We spent a lovely day wandering the hills and exploring the famous landmarks associated with Lermontov, soaked our feet in some of the foot spas, took the waters here and there and then went up Mount Mashuk in a cable car to enjoy the spectacular views of the surrounding mountains. 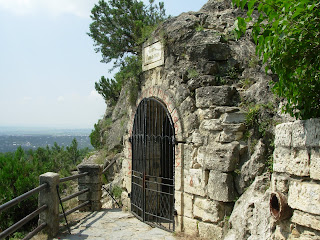 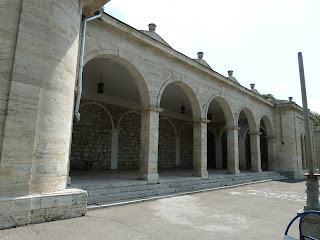 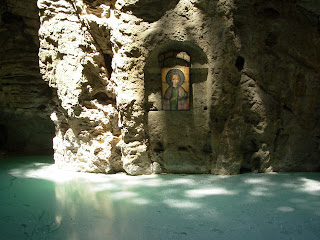 Proval - another romantic but smelly place. Couples used to come here
to declare their undying love.
Pyatigorsk means five peaks and on a good day, you can even see Mt. Elbrus from here. German and his wife also went to a lot of trouble to find me something for my foot which I had injured jumping to the ground from one of the trains that extended past the platform. Though it took a few days for the swelling to go down, a fist sized bruise on my thigh (bus damage) disappeared almost immediately while soaking my feet. It felt good too, though the smell was a bit on the nose. 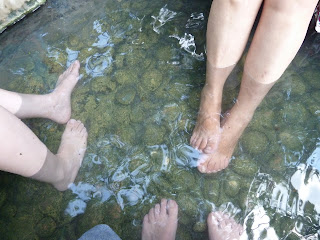 Ahh. That feels good! Soaking our feet. This is German's photo too
On other days I walked the famous tree lined Pr. Kirova (Peace Avenue), to soak up the atmosphere, lust after exquisite looking pastries and admire the passing parade. Forget the images of female  tractor drivers and shot -put champions which used to be shown occasionally in the Western press. All the Russian women around here seemed to be tall and slim and had a marvellous sense of style which made me feel really frumpy. The shops are full of expensive clothes and outrageous boots that would do a dominatrix proud. For the less affluent there is also a market  at the top of the hill which has hundreds of clothing stalls crammed together, both new and pre- loved, as well as a fine selection of fruit and vegetables.
I simply loved the smell of the herbs there - fresh dill especially. Cucumbers, tomatoes and cabbage were great, but the fruit wasn't much to speak of. Small green underripe apples and about $4.50 for a hard underripe peach.Still, it was probably a different story in people's homes as a peek up lanes and into courtyards showed fruit trees bulging with fruit. Tempting. The salads were nice though and so was the dairy produce, esp. the kefir, even if  I almost died of shock though when I got the bill. The advertised price referred to so much per gram, not the actual cost of the item. 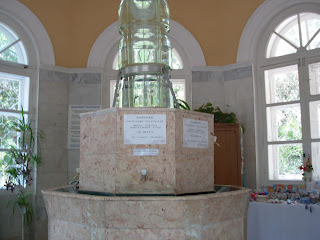 Inside one of the opulent drinking galleries. You can just help yourself though you may have to pay two roubles for a plastic cup if you haven't brought your own. Each spring is for a particular purpose - kidneys, stomach and so on, as determined by the spa research institute
In the warm sultry evenings couples walk hand in hand through the streets and gardens or dine in the soft lights of dozens of open air cafes. There are street artists, icecream vendors , corn sellers and street stalls selling all manner of goods. There are also young dark -eyed women with babies on their arms begging for money 'For Moloka to feed the baby." I said to one girl that I would buy her some milk but she got really angry and cursed me in Tatar. Alex back at the guest house told me that these women are "professionals" and are probably quite well off. Laughter and music spilled out from cafes and elegant reception rooms and one night there was a free concert in Lermontov's Park. People were on holiday and a happy, friendly mood prevailed.
Should the local attractions ever pall, there is always Mt. Elbrus, at 5642 m (Lonely Planet, 20066:487) the highest mountain in EU only a day trip away.  I’ll tell you all about that in the next post. 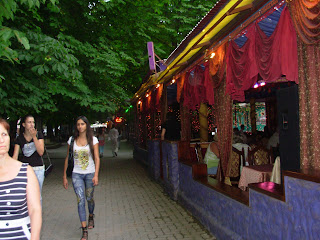 Nightlife in Pr. Kirova
Meanwhile, I wanted to stay longer here – at least until my foot got better, so I had to front one of the big tourist hotels which were the only ones who knew anything about the registration procedure. Russia has not had many independent travellers – certainly not back -packer types, so there is very little in the way of infrastructure – few hostels outside Moscow and St. Petersburg, no dual signage anywhere, rarely any staff that speak English.
They did at the Hotel Intourist, but the receptionist who looked like a disappointed Botticelli angel, said" Papers! Passport! Visa!" and initially refused to help  because I didn’t have documentation to account for every single night I had spent in Russia – about six weeks at this point.
Apart from staying with friends here and there, I had given one train ticket away with my address scribbled on the back (no –one had ever mentioned that you were supposed to keep them) and had spent several nights in train stations waiting for tickets. I was hoping I wouldn’t have to call on my friends, the lawyers from Samara, as I risked being fined and deported on the spot .
A taxi driver (God Bless them and they were very cheap in Pyatigorsk too!) found me a place to stay for the night  and the next morning I went there again. This time, there was a different receptionist – Ulla, who not only spoke excellent English but actually smiled. She has been to the US. She immediately drove with me to Immigration, jumped all the queues and had the matter sorted by mid- morning, though it did cost me an expensive night in the Intourist –one of the most expensive ones I had in the whole of Russia. 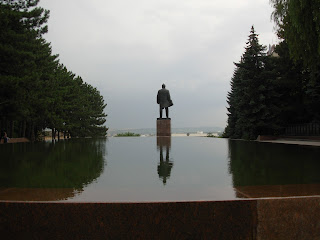 Russians have a name for over -officious, unhelpful burocratic types who use the letter of the law to make life difficult to avoid actually helping you. They call them dustpans. They have some other very witty expressions. For instance the TV is universally known as the zombie –maker and  speed humps, originally called silent policemen are more popularly known as dead policemen. 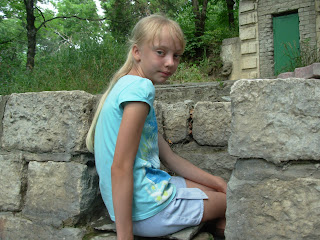 Hi Tonia!
Thanks German, Nadia and Tonia, Natasha and all my other friends in Pyatigorsk for a wonderful time.
at November 11, 2010