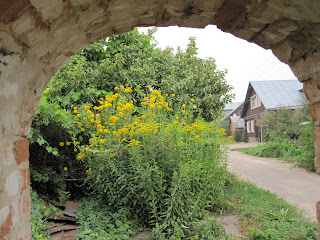 The Golden Ring is a series of towns around Moscow, including Sergei Possad. They are all rich in architecture and history. 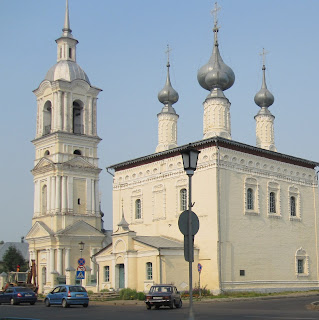 One of the many churches in Suzdal 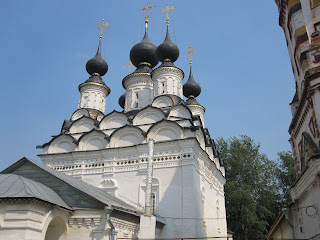 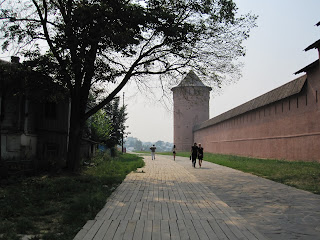 The walls of the massive Saviour Monastery of Euthemyius
partially funded by Ivan the Terrible. This is one of seven monasteries.
Suzdal in contrast to the grandeur of Sergei Possad, was charming and village- like because the powers that be had sensibly decided to limit the development of this former monastic centre. Some of its buildings were still a bit down at heel, but this rather added to its charm and you could see in these generally more modest and older buildings how the architectural wonders seen in Moscow and Sergei Possad evolved. 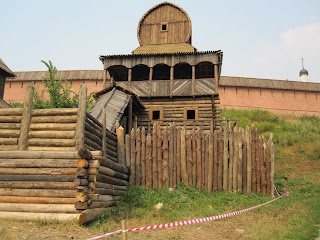 In this replica of an older church the evolution of the Pskov style can be seen
Originally a trade centre, it became a regional capital in the 12th century before being taken over by Moscow in 1392. After that, it found favour with a succession of tsars and wealthy merchants who funded many of its churches, monasteries and convents  (Lonely Planet 2006: 207).  The result is that you could hardly throw a stone in Suzdal without hitting a church of some kind or at the very least, an artist trying to paint it. 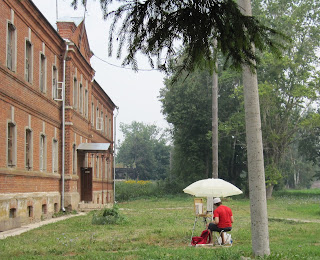 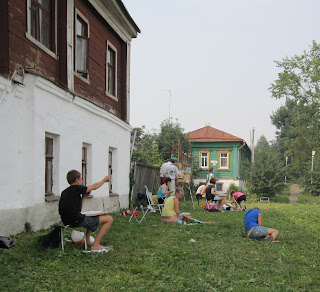 Suzdal has always been a favoured destination for artists 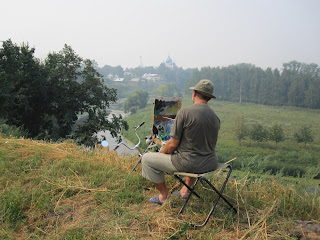 Suzdal was also the place where tsars disposed of their unwanted wives. Their convent was just down the road from the former monastery where I stayed. It was while taking my own photos that I began to notice the smoke haze which eventually spread over much of Russia. However, it was not until I spoke with my son in Australia a few nights later, that I found out that 140 fires had broken out as a result of the heatwave and Moscow residents had been warned to stay indoors. He had heard it on the news and it was official.  This was the hottest summer ever recorded in Russia! 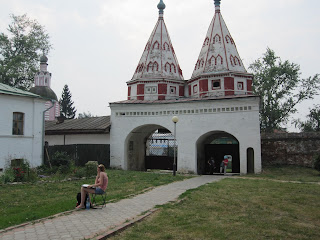 Entrance to the former monastery where I stayed
The Price of Fame
Meanwhile, I badly needed to sleep, shower and do laundry, but as with Tobolsk, almost everything  was booked out and prices had sky -rocketed. I thought I had booked and paid for two nights at 1000r, but when I came back from a walk there was a man at the desk demanding money with menaces. He wanted another 2000 roubles! I rushed to get my receipt which clearly showed 27th and 28th. However, he insisted that it meant from the 27th to the 28th not two nights. As I hastily began to pack, including my wet washing, he suddenly remembered that there was a five bed dorm room in which I could have a bed for 700 roubles. I should have left anyway, but it was too hot and I was too tired and there probably wasn’t anywhere else. As I said, it’s not the Russian Mafia you have to worry about.
Set along a gently winding river, the town has shady trees, wide streets and beautifully restored buildings. The shops, often located in courtyards, are so discreet it took me ages to find them. Though it had a  peaceful feel, it was anything but quiet. As I walked along the riverbank, the grass was being mown. A lively accordion player was drowned out by the sound of church bells and people were laughing and swimming in the river below. Perhaps it was the gentle pace of life. 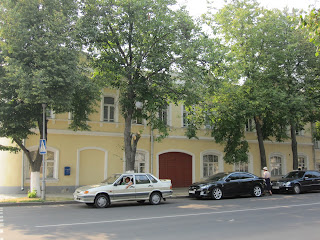 Main Street, Suzdal. Where are the shops? I found them later
in court yards and in the Trading Arches 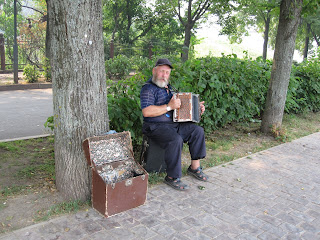 Accordion player on the way to the Kremlin 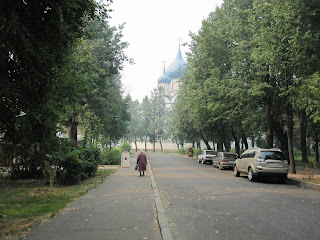 On the way to the Kremlin
One of the places I did find, was a lovely meadery, with vaulted ceilings, long wooden tables and stained glass windows. It seems that the monks have been busy perfecting this art for centuries and there’s quite a bit of it for sale around the town. Here there were at least ten different kinds and at four different strengths ranging from zero to 8%. This early in the day it seemed best to start with the non -alcoholic one at 15 roubles. I don’t remember what the first one was, but the second one was pine and rose-petal. 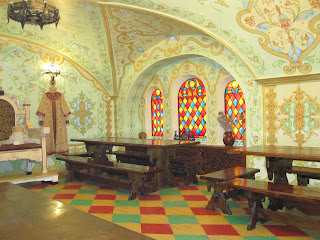 The beautiful interior of the Meadery 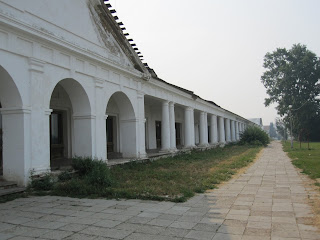 Suzdal's magnificent Trading Arches - very cool inside. The Meadery is at the far end 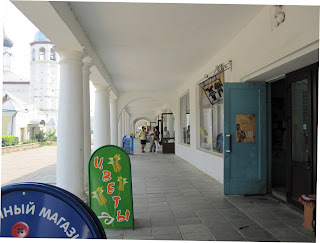 On the other side in the hot sun, babushkas (grandmothers) were selling produce –mainly cucumbers, tomatoes, dill and berries. 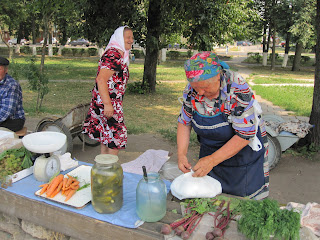 When they saw how little I was buying, these ladies wouldn't take my money and just gave me my couple of carrots and a cucumber. Too bad the berries were so expensive (at first)
The berries looked delectable too and I did desperately want some fresh fruit, but they were still very expensive at 100 roubles for a small cup. Later in the day though, one of the women - another Natalia (Natasha), and now slightly tipsy, insisted on giving me two small buckets of raspberries and one of white currants and walking me back to the monastery. A birthday party was in progress in the restaurant and she was able to trade one of the buckets for half a bottle of Vodka, some bread and some ham. Just as well, as there would have been no way that I could have either eaten them all or carried them. As it was, I had to leave the second bucket for the staff. 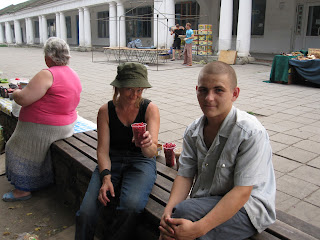 Thanks Natalie and Alexander! Hope you didn’t regret that in the morning! 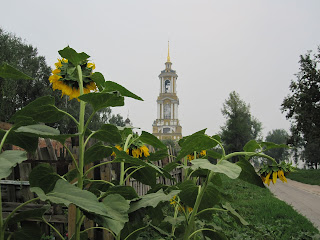