One Day in Kazan 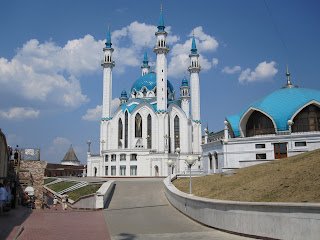 The fabulous Ul Sharif Mosque, Kazan
I did finally make it to Kazan, one thousand years old and the capital of Tatarstan, though I had to backtrack a bit and it was a terrible ordeal in the heat. (I promise I will stop whingeing about this after the next couple of posts!). This is also a World Heritage site and one of the places that Russian friends had recommended that I should see. The Kremlin was fabulous to look at (except perhaps for the Mirage Hotel, parked right in front of it) and had quite a history. The story goes that Ivan the Terrible sacked the city and razed the former mosque to the ground in 1552 because he had been spurned by a local princess.  The new one, Kul Sharif, is a stunning confection of white and blue domes and spires, a defiant statement by the newly autonomous Tatars who had long been a pain in the posterior of Moskovite rulers. 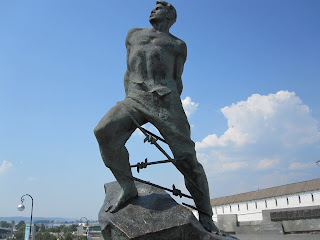 On the way in you pass St. Dimitri. Prayers to him are supposed to help you overcome addictions
I am sorry to say that they have not worked yet. 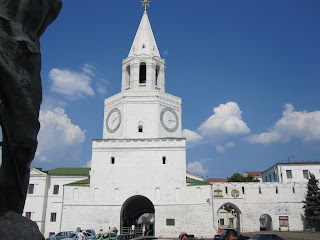 Entry to the Kremlin is via this lovely gate church 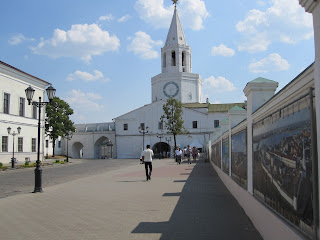 Inside the Kremlin's thick walls
To put the Tsar off, the Princess Syumbike had said she would marry him if he could build a tower taller than any other mosque in the city within a week. Crooked though it is, Ivan succeeded and came to collect his bride. Alas, shortly after, Syumbike jumped to her death from the upper terrace (Lonely Planet,2006 : 412). Another typical Russian tragedy of love gone wrong. 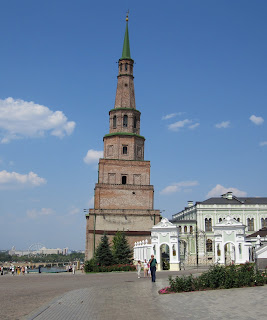 
In Kazan you can feel that you are in an entirely different world. The women wear colourful head scarves and are richly dressed. In the thick stone outer walls dating from the sixth and seventh centuries there are alcoves that look like treasure caves. They discreetly offer silks, jewellery, belly -dancing costumes and beautifully embellished leather boots. 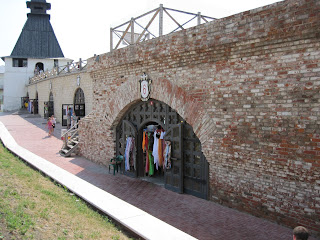 There are niches and shops within the thick stone walls 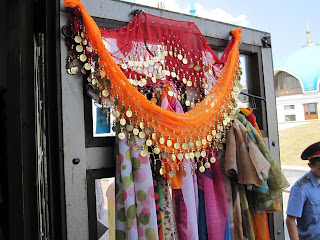 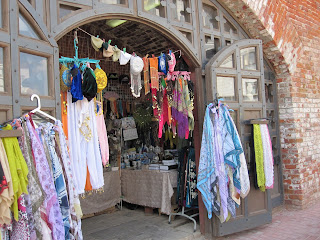 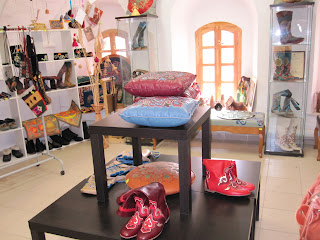 There are other beautiful buildings both inside and outside the Kremlin, also in the town, but it was simply too hot to appreciate them and I was getting hungry. 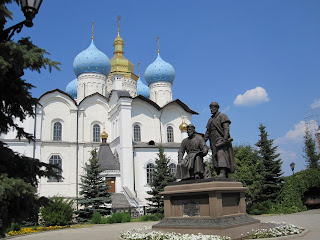 Annunciation Cathedral, an Orthodox church within the Kremlin 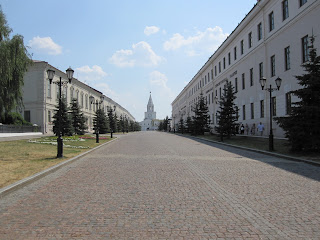 There are many other lovely buildings here 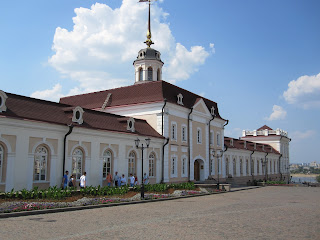 These are some of the administrative buildings within the Kremlin 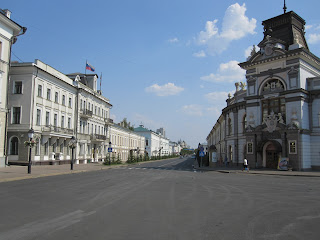 Just outside the Kremlin is the National Museum of Tatarstan (right). The buildings here are beautifully restored and maintained too


I headed back to the station via the brand new Metro. Unfortunately the metro didn’t seem to stop at the station, and I found myself going back the way I came.  At least it was cool underground and the stations were almost as exquisite as the mosque. You were not allowed to take pictures inside but I had already taken these before I found out. 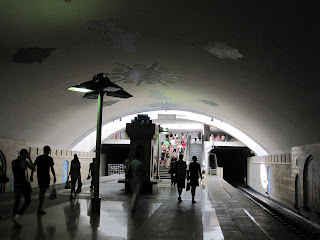 Inside Kazan's short and beautiful Metro 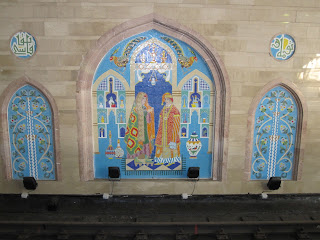 There is beautiful mosiac work on the walls 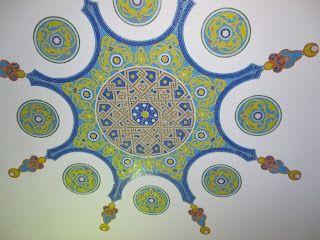 ...and Ceilings
By 9.30 pm, it was still 31oC and I had drunk two and a half litres of bottled water but was still desperate for something to eat. Since my bread and cheese had gone mouldy on the way to Pyatigorsk and after the kefir incident, I had decided not to carry my own food anymore. At the street stalls around the old station which was now the waiting room, what little there was on offer looked as if it had been lying around all day without refrigeration. I suspect that this is not usually a problem in Russia.  On that day, not even the juices and mineral water were cold. Any fridge space was reserved strictly for beer. I imagined my apple juice fermenting in my pack in Left Luggage and hoped that it wouldn’t explode over my clothes. 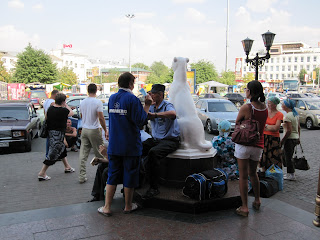 People trying to cool off outside the Old Station

Near the new station I eventually found a café with a refrigerated counter. It not only had my favourite beetroot salad, but two pieces of cold chicken which I demolished as well. Later, I discovered that there were quite a few food places in the new station including a very inexpensive café upstairs where I ended up having coffee.
By midnight, there were still no tickets to Vladimir (that’s why I have so many photos of Kazan stations!), or other Golden Ring towns, so I eventually took a rough Electrichka – 4th Class, no beds, to Novrogod and then a very swish train, though also seats only, but upholstered, to Vladimir. Although Vladimir was once the Capital and home to Russia’s first war hero – Alexander Nevsky, it was a big city and I had been up all night by the time I got there. I took one look at the industrial heartland that I would have to wade through to get to its interesting bits,  that I decided to give it a miss. Instead, I took a bus straight through to Suzdal, another World Heritage listed town. 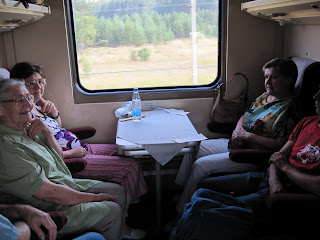 On the Train to Vladimir at last!
Email Post