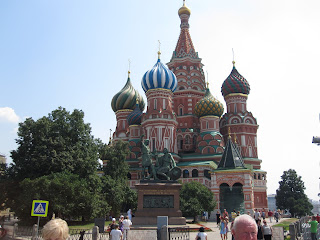 St. Basil's Cathedral, Red Square
Russia’s heatwave continued. Seeing the grandeur of the buildings in Moscow, the palaces, theatres and the museums, I had the feeling that much of the country's wealth had historically flowed in this direction, rather than to the small wooden houses in rural Russia or to the rusting industrial towns in some of the less touristed areas. For some reason it felt like a grasping octopus. It did not help that I was hot and tired and that on arrival I immediately got lost. I was also charged about three times as much for a piroshki (a small bread-like pastry with cabbage or meat inside) than I had been paying in the country and that the first taxi driver wanted the special tourist rate of 1680 roubles per kilometre to take me anywhere at all.
Just as well I found out before we had gone got too far, because several frustrating hours later, I discovered that the place where I was staying was only a short distance from the underground and that he was heading in the wrong direction.
After several false starts and with the help of some friendly “ninjas” and Alona, the girl who ran the hostel, I finally found it. The Ninjas - Alexi, Anastasia and her brother, belonged to something called “Uniform Culture.” 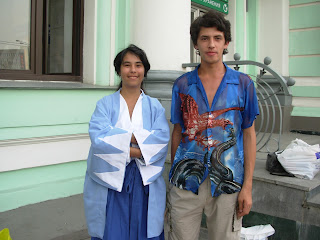 Anastasia and Alexi
Anastasia spoke particularly good English, which she swore she learned entirely by watching  Japanese Anime Cartoons -so well, that I am revising my entire theories on language teaching. Then, when I admired her costume, she quickly whipped out another from her pack.
The Yellow- Blue Bus hostel  had free internet, which had been rarity since Mongolia. Occasionally, I would find a computer in a Post Office, but they were only available during office hours and usually had long queues.
Knowing that I wouldn’t be able to stay long, I thought I should at least visit the Kremlin. Like Sergei Possad, it had richly decorated cathedrals, but also palaces, the Duma, towers, museums and an Armoury. It was so crowded that it sounded like the Tower of Babel with so many different tour groups all speaking different languages. Red square was the place for weddings and sundry school excursions and to top it all off, there was the amazing sight of Potrovsky Cathedral (at the top of the blog) better known as St. Basil’s, which Ivan the Terrible had had built to celebrate his victory over the Tatars. A few glimpses from inside the Kremlin follow. It was so hot that the kefir I was carrying exploded in my bag. 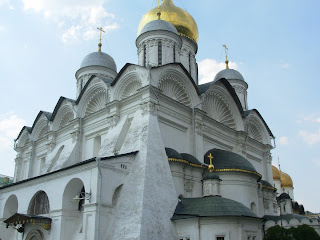 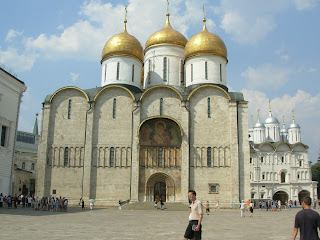 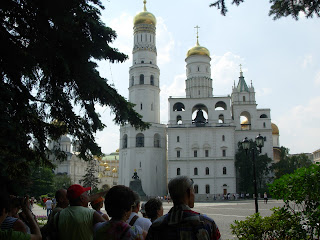 Crowds near Ivan's Bell Tower.
For many years no building in Moscow was allowed to be higher 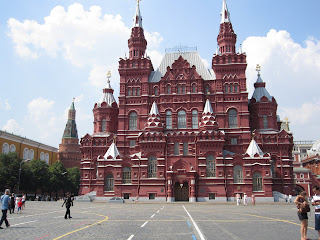 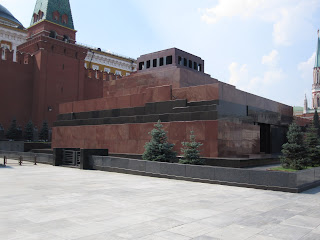 Lenin's Tomb. Normally you can go in to see his embalmed body, but today was his day off 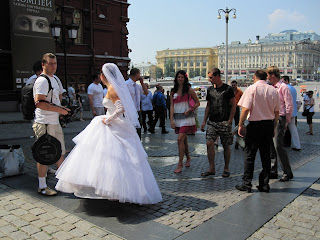 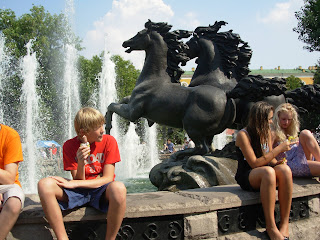 People cooling off at the fountains outside 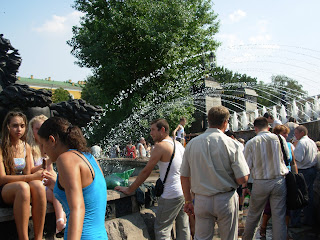 Dead Poets' Walk
Many famous writers and poets lived and worked in Moscow including Pushkin, Tolstoy,Chekhov, Gorky, Dostoyevsky and Gogol, and they were just the ones I'd heard of before I came. Except for Tolstoy who lived to be 82, and possibly Gorky who lived to the ripe old age of 68, most had short, tragic lives. Mayakovsky and Yesenin died by their own hand, aged 37 and 30 respectively, Chekhov and Bulgakov though illness, Pushkin and Lermontov in duels, and Gogol at 47, by refusing food. Most fell foul of the regime at some stage and experienced arrest or exile, and some may even have been murdered (Mayakovsky, Pushkin, Dostoyevsky) but this, along with their writing made them folk heroes. Sixty thousand attended Pushkin's funeral and Tolstoy's also attracted enormous crowds.
They also had a profound influence on society around them, and not only in Russia.Tolstoy for instance, founded 16 schools which provided the inspiration for A.S. Neill's Summerhill School and provided the bones of liberal education as we know it. I visited many of these 'sacred sites' to gain some insight into their lives and perhaps the Russian soul.  (I gleaned most of this information from Wikipedia to whom I should shortly make a donation). 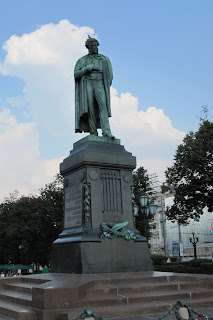 This is Pushkin, still the most beloved of the writers
Both Pushkin and Mayakovsky preside over the squares named in their honour. They also have Metro stations named after them and Pushkin also has a theatre. 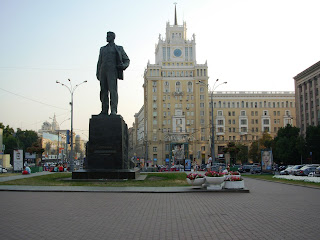 Mayakovsky looks over his Square 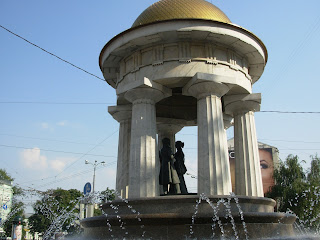 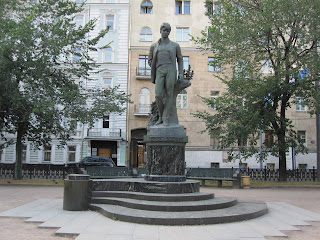 Yesenin stands alone in the centre of the main boulevard

House museums provide insight into their life and times and show that these legendary beings were human after all. In Alex Tolstoy's former flat (Leo's less well known brother who was also a writer - that must have been a hard act to follow!), there are children's toys on the mantelpiece in the drawing room and the colourful children's room has a kind of cubby 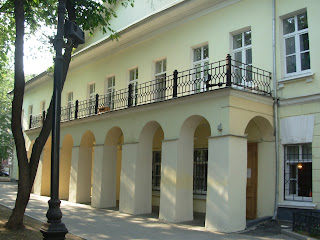 The Gogol House Museum has been preserved exactly as it was when he died.
This rather somber house included his death mask 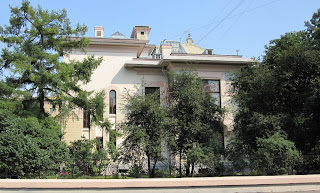 This beautiful Art Nouveau house was given to Maxim Gorky after he wrote an article praising one of the Gulags. He was always embarrassed about having such a grand house. 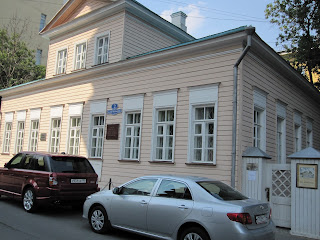 This modest cottage belonged to Lermontov. It now seemsto be closed to the public, but life size bronzes of characters from his work can be seen in a garden nearby 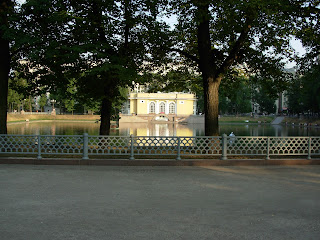 Patriach Ponds near Bulgakov's flat where he set part of his novel "The Master and Margarita."

The next day, having had my fill of history, I decided to go to the brave new world of a modern art gallery in a former bus depot in the suburbs. Its brochure advertised work by Antony Gormley which I had previously encountered in Western Australia (see post the immortals, in March 2010) and free admission.  Again, no –one had heard of the street or the place. Few of the streets were named and those that were, weren’t on my map. On some days, travelling in Russia is really hard work. When I got there at last, there was more security than at many airports  –about  ten men in black with walkie talkies and an x-ray machine which I had to walk through twice before giving up my bottled water and bag. Were they saying something about modern life? 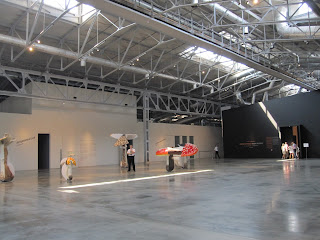 Inside the "Garage" Modern Art Gallery. Were the men in black part of the display?
There was also an expensive cover charge with the special exhibitions costing extra. Again, I seemed to be the only visitor and I suppose someone had to pay for all that security. Alas, there was no sign of Antony Gormley’s work, but I saw some fascinating if totally incomprehensible video collages - that's the problem when all the catalogues are in Russian and you don't speak the language or happen to have a helpful English speaker around.

I did however, see some marvellous footage of performance art over the decades including that famous bed scene with John Lennon and Yoko Ono in the name of World Peace. A battery of video screens brought back memories of the sixties and seventies with references to Jerry Rubin’s Do It and Abe Hoffner who went to the Stock Exchange and threw away $1 bills. It all seems rather quaint now, especially the fashions, but it was radical and heady stuff at the time. One of my favourite installations was a pile of chocolates in a corner. The other had to be the coffee shop. 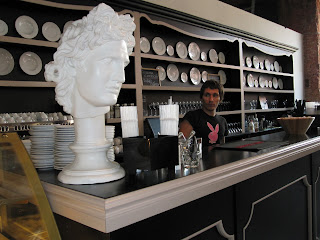 One of the best installations was the coffee shop 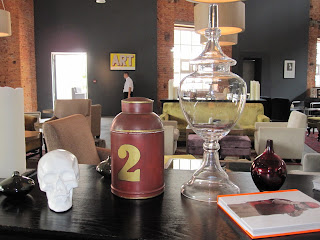 The coffee shop had a sort of gothic-pharmaceutical theme and very comfortable couches
Underground Art
Sometimes you find art in unexpected places. Like the railway stations, the Moscow Metro stations were things of beauty and very efficient too. They were immaculate and minus muggers, graffiti and chewing gum. Instead, many of them were themed and had mosaics and sculptures. It was more like entering a theatre or a gallery. They also had amazingly long escalators and so steep that people leaned back on the way down. 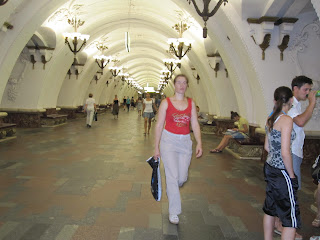 Inside one of the Metro Stations 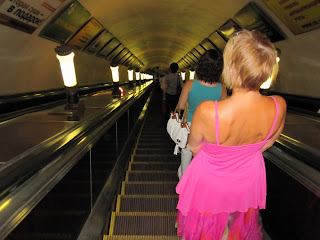 Journey to the Centre of the Earth. Russia has some of the world's longest escalators.
I read somewhere that the metro stations were also intended to be fallout shelters in the event of war
I wish I could tell you about the theatres, nightlife and restaurants, but the Special Tourist prices were way too much for me.  It was a case of travelling or going out. Same goes for shopping. For me though, it is more about what a city feels like, what the people do, the street –life, the architecture and the little things that make it different from any other place.
Another odd thing I rather liked in Moscow was the way they made renovations look attractive, probably important in city with so many imposing old buildings. I blame Catherine the Great’s lover Potemkin, for this innovation. When he took her see the lands lately won from the Turks, “he had cheerful facades erected along her route” so that she would not see the “mud splattered hovels” that made up the city which would bear her name –Ykaterinenberg  (Lonely Planet,2006: 459).  In Moscow, this idea has been developed on a grand scale. Instead of the ugly temporary hoardings that we have when a place is under construction, they have large canvases depicting the finished work. If you don’t look too closely, you could be fooled into thinking the work had already been done. 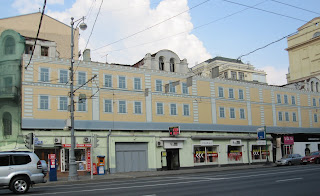 It was clear that not everyone has benefited from the new prosperity. While the shops were full of the latest goodies, the elderly, the disabled and the unemployed have certainly missed out. Nor are there jobs for life anymore as there were in the supposedly 'bad' old days of communism. Several people were begging outside the grand churches, wounded soldiers sold chewing gum in the subway and disabled people did not seem to be catered for at all. 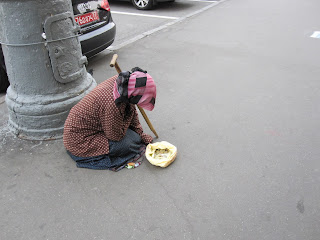