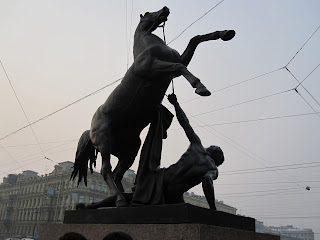 Pytor Klodt's famous horse, the one with the odd physiology, though you would be hard pressed to see it because of the smoke
The water is undrinkable, the mosquitoes are legion and if you are really unlucky, the fleas from the basement will rise up and bite you because the central heating has been turned off  – and that’s just what the guide book says. For all that, Peterburg as the locals call it, is an amazing place. The tsars certainly thought so too, with most of them preferring to live here, rather than in Moscow (Lonely Planet, 2006:225).
Built by Peter the Great after his victory over the Swedes in the C17th to make sure they didn’t try to steal it back, he hired the finest architects and artisans from all over Europe to make it one of the world’s grandest capitals (Lonely Planet, 2006:225) and it looks like he succeeded too. There are canals very much like those in Venice or Amsterdam, beautiful gardens modelled on those at Versailles and so many palaces, mostly designed by Italians, that it makes your head spin. 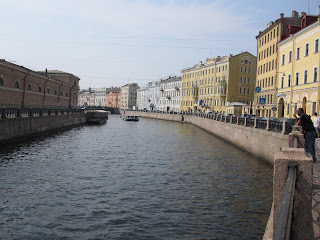 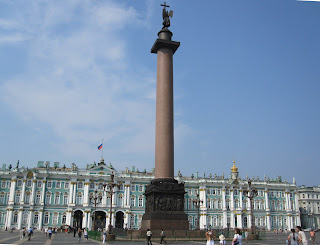 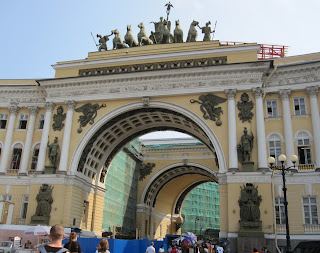 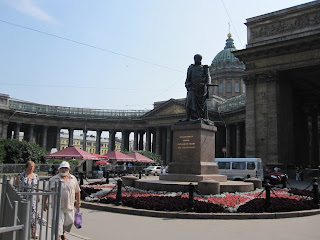 Russian architects got a look in as well. Kazan Cathedral designed by Voronikhin
was inspired by St. Peter's in Rome
Although merchants complained about having to move to St. Petersburg, they were responsible for many fine buildings too. The Singer Building (of sewing machine fame) below is one of the more elaborate ones. 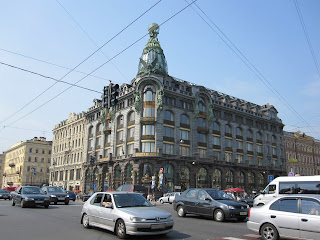 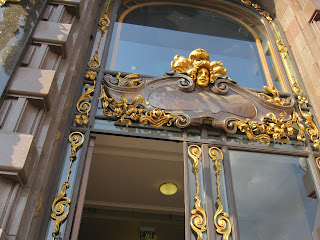 Remember those beautiful sewing machines? They were works of art decorated in gold and black
with flowers and curlicues. This is where they originated
St. Petersburg, Putin’s home town, has always attracted more than its share of creative spirits, intellectuals and rebels. Pavlova and Nureyev danced here, Rimsky – Korsokov, Glinka, Tchaikovsky and Mussorgsky* composed here and Dostoevsky* and Pushkin wrote here. Pushkin also died here.
It is also where the Russian Revolution began. The first attempt by nobles in 1825 (the Decembrists) was a  bit of a flop, as was the one in 1905 known as “Bloody Sunday” when peaceful protestors at Palace Square were shot on the tsars orders. 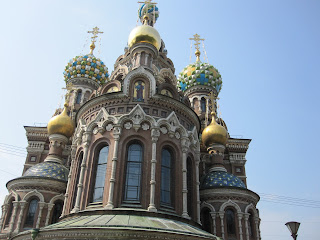 The Church of the Saviour on Spilled Blood was built on the spot where Alexander II was blown up in 1881. Although he had freed the serfs, his reforms did not go fast enough.
Though minor democratic reforms were  subsequently achieved, food shortages resulting from the outbreak of World War I, once again led to rioting and violence. This time, soldiers and police refused to fire on the protestors and the tsar was forced to abdicate (Lonely Planet, 2006).
In 1917, Lenin, who had already been banished to Siberia for three years for leading the first Marxist cell in St. Petersburg, returned from Finland and, seizing power from the more moderate Menchevicks, formed the new Soviet Government.
During WW II, although the capital was moved back to Moscow so that it wouldn’t be destroyed by the Germans, Hitler was determined to wipe out the roots of communism at their source. Although Leningrad as St. Petersburg was called at the time, was beseiged for almost 900 days and over a million of its inhabitants died, many of them of starvation, the Germans could not break the spirit of its people (Lonely Planet, 2006).

These days St. Petersberg is still a lively friendly city and a busy sea port  which continues to attract more than its share of tourists and artistic types.