One Day in Tallin 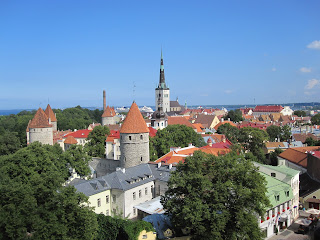 Tallin, Estonia - the Perfect Medieval City
Tallin is a wonderful place. In fact, if I have any complaint, it would be that it’s much too nice. It's so clean you could eat off its cobbled streets, the people are universally friendly, it has quaint buildings, everything  works and  the toilets are free. However, after the frenzy and chaos of Russia where it’s still OK to smoke in cafes and shops don’t close until late (they don’t open before 10 am either) and revelry continues far into the night, I was afraid that Estonia was going to be a bit like the way someone once described the difference between Canada and the US,” like spending a long wet weekend with your aunt.”

Though it was rather like being in someone's parlour and you felt you shouldn't light up or pass wind, there were smoking rooms in the little tobacconists and there was undoubtedly a lot more nightlife than immediately obvious to someone who had just stumbled off an all night bus. Perhaps they should scuff the place up a bit and hire a couple of heavies to toss  around a few beer cans and grunt abuse, so that visitors from other capitals feel more at home. 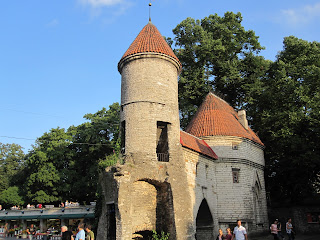 This is Viru, at the entrance to the Old Town
Tallin is the quintessential medieval city, without the smells, appalling sanitation, the rats and the plague. The town walls are thick and have lots of towers, many of them with interesting names. It needed them. Because of Estonia 's strategic location, everyone wanted a piece of the action. In the C13th it was the Germans and the Danes. The Swedes were next and they ceded it to the Russians in 1710. No sooner had Estonia declared its independence in 1918, than it was occupied by the Russians. The Germans occupied it in 1941 and then it was reoccupied by the Soviet Union in 1944. Finally, after the collapse of the Soviet Union in 1991, Estonia became independent again and joined the European Union in 2004 (Most of this information comes from Janni and Wikipedia). 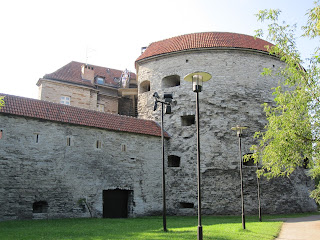 Fat Margaret was supposed to protect the city from seaward invasion 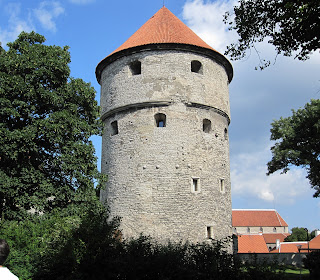 Kiek in de Koek (it doesn't mean what you think!) on the Eastern wall has secret passageways leading down to the harbour 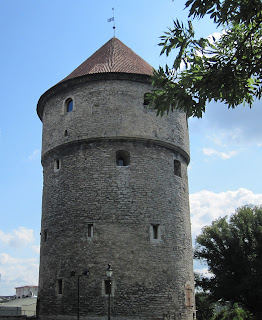 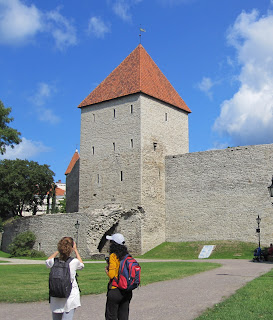 The Maidens' Tower where unwed mothers and prostitutes were incarcerated was presumably to protect Tallin from moral turpitude.
It is also the site of the Sunday Music Markets
Within the city walls there is Europe’s first pharmacy (1422), a very ancient guild hall and the oldest working clock in Europe.  In the very old Lutheran church at the top, the early nobility is buried under the floor and their escutcheons hang on the wall. There is also the romantic old Danish King’s garden, the new (relatively) salmon pink Parliament House and a sumptuous Russian Orthodox Cathedral - every invader built their own place of worship -in which real gold was used in the decoration. 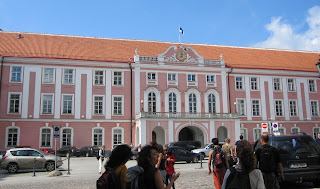 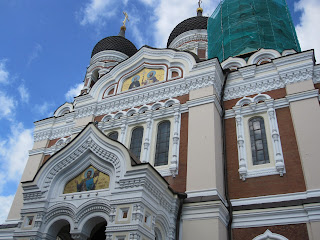 
I know all this thanks to Janni, one of the friendly free tour guides, though they do welcome tips. How else would I have found out that the area near the Maiden's Tower is where the Sunday Music Market is held and that in the days of Soviet rule, when Western music was illegal, bootleg dealers - the same ones that sell there now,  sold music here under the guise of coin and stamp collecting. Or that the heated toilet near the Danish King's Garden was conceivably the most expensive toilet in the world and is very popular with the homeless. Tallin is very good at tourism. Four cruise ships were anchored in the harbour. As well as the free tours, it has a tourist  information office with multilingual brochures and almost everyone speaks excellent English. 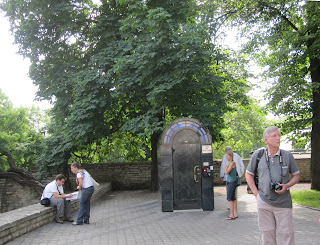 This convenience cost almost three million EEK to build. Though admission is free, you may have to fight the homeless for it
I promised myself I wouldn't do another guided tour, but Janni's jokes and anecdotes and very personal knowledge of the place, made this one rather enjoyable.  Like my ninjas in Moscow, Janni says that she too learned her English by watching TV. I suspect that one of the reasons Estonians are so good at it is because their own language - related to Finnish, Mongolian and Hungarian but not Latvian, Lithuanian or any other Scandinavian language, has fourteen cases and English must be a shoo -in after that.  *By the way, students of English, you are not supposed to use the word nice to describe anything but food and even then only sparingly. I just felt like breaking a few rules today. 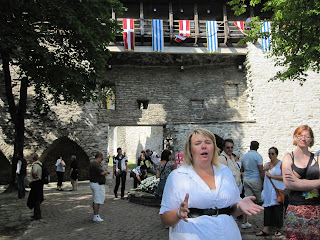 Janni the tour guide in the Danish King's Garden 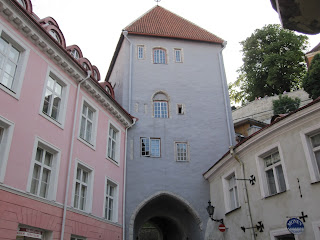 We followed Janni through nooks and crannies
Ducking under arches and hobbling down narrow cobbled lanes revealed courtyard cafés and tiny shops offering traditional handcrafts and loads of amber that gleamed like honey behind the window panes. There were stunning buildings at every turn and far too many tourists quaffing ales and gorging themselves at the many sidewalk cafes. Not being quite flush enough to do likewise, Georg Lohmann who is involved with the Zegg Centre for Experimental Social Design near Berlin and whom I met on the tour, introduced me to the ultra modern Solaris entertainment centre, just outside the Old Town. This not only had an excellent food court with cheap meals, but was an architectural wonder in its own right. 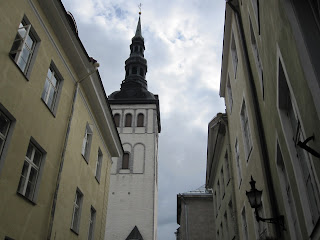 We trailed past many beautiful buildings.. 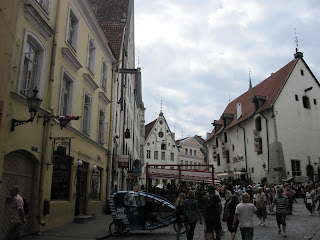 ...which were almost impossible to photograph. That's the Town Hall on the right. 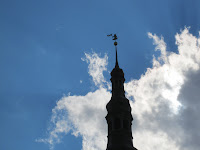 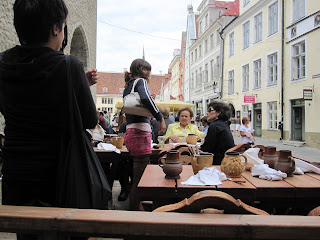 In courtyards and sidewalk cafes, there was much quaffing of ale... 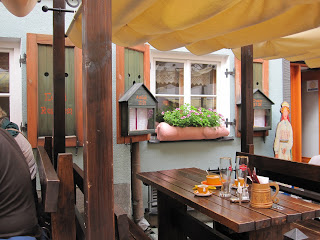 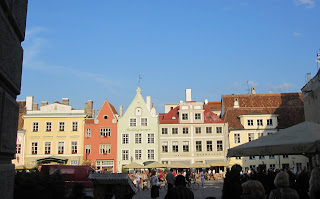 Some of the beautiful buildings around the market place


At last we came out near the market place. One of the  nice things about the crafts here was that they were a little different (I don't want to see another Matrushka doll!). The other was that they were superbly finished.  There were finely woven linens, handknits, ironwork and handmade books. The mortars and pestles for example, made from local limestone were wonderfully smooth  to the touch and so was the woodwork. 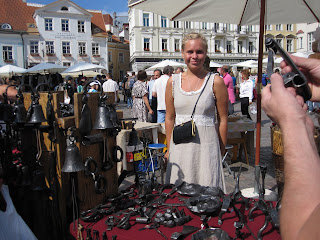 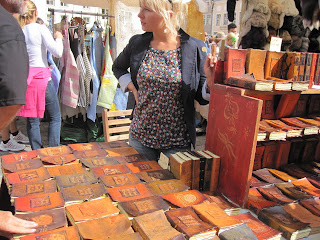 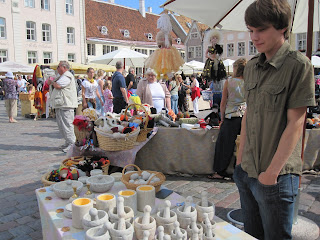 Smooth to the touch. Mortar and Pestles made from local limestone
It was also nice that so many young people were involved in the work of the town and what's more, looked happy about it. It gave the town a lively lived -in atmosphere, rather than being a museum. In the upper levels where once only the nobility could go – servants who escaped could stay free if they managed to stay in the lower town for one year without being caught – young men in medieval dress were minting coins in the traditional way. Young musicians and the women making the delicious spiced nuts were similarly attired, as were spruikers for various restaurants and events. 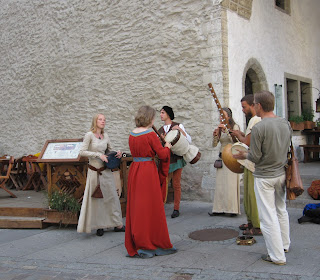 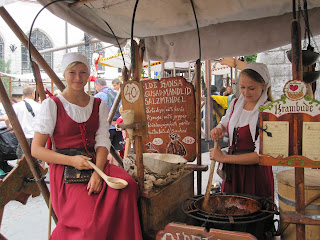 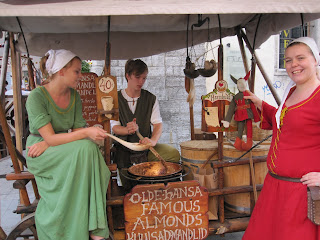 Medieval Costumes add to the appeal 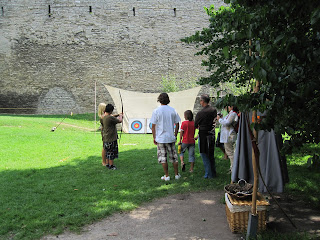 The medieval theme continued with archery just outside the city walls
Beyond the walls there were many other fine solid buildings such the Opera House, a flour mill which was now a museum for Soviet memorabilia, several galleries and artfully made over designer shops. One of these, a former salt warehouse, had been turned into a shopping mall wonderfully named  Lootsi. Each of these places would have been famous if the Old Town hadn't stolen all the limelight. 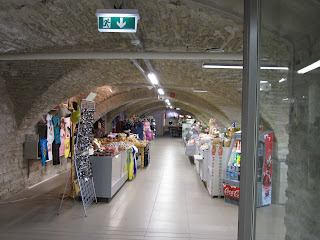 Lootsi is a big shopping mall inside an old salt warehouse
Speaking of  names, while Estonian was mostly a complete mystery to me -it seems to me you couldn't go wrong if you just added a few extra vowels, there was no doubt about the meaning of this sign. 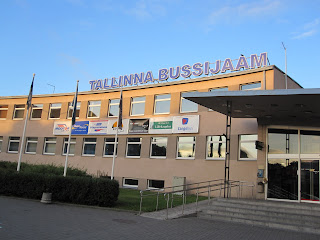 Although Estonian is largely incomprehensible to foreigners, even I could work this one out.
What a perfectly apt name for a bus depot!
Another small thing that rather tickled my fancy was that the local currency the Estonian Kroner, is written as EEK. I'm not sure what the second "E" stands for, but when you see it on menus and price tags, you feel that it should have an exclamation mark after it.


Spaghetti Bolognaise 120 EEK
I apologise for putting in so many of the towers. They turned out much better the photos of the other buildings
Thank you Tallin for a delightful stopover!