The beauty of small treasures....


From the outside, this looks like a very ordinary 50's house and the interior spaces are quite small, yet some people have the knack of being able to transform bland spaces into something much more with just a keen eye and a little imagination. Inside, Tardis -like it packs in a lot more than can be seen on the surface and like a time machine it reaches back to the prehistoric past and forward to the science fiction future with a little fantasy and playfulness in between. I photograph the objects trying to capture a little of this, but the photos don't really do it justice. There's the juxtoposition of things. The high tech and the board games, the little groups creatively placed. The odd unsual thing. It reflects the owners' personalties rather well. There' s also a bit of a jungle theme going here. 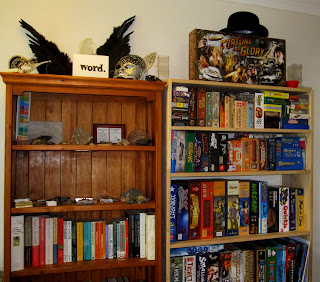