And Speaking of Smoking Bans.... 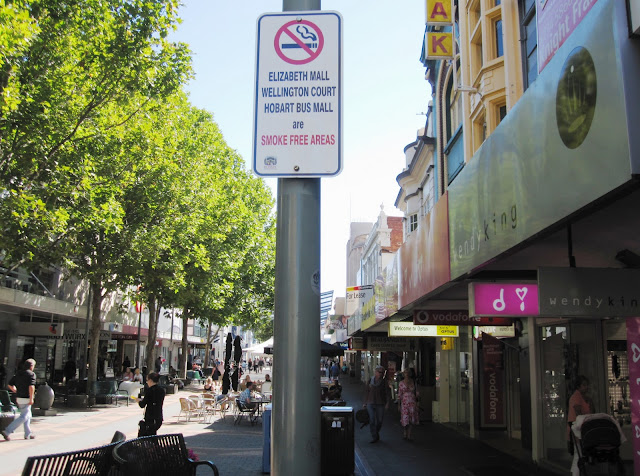 Smoking hasn't just been banned in the mall in my home town since I was away, it has also been banned in all outdor eating and drinking venues. Smoking inside restaurants, bars and workplaces was banned long ago.
The way the weather has been it reminds me of  an absolutely classic scene in one of the The IT Crowd, episodes - sorry I can't remember which one. Jane, one of the main characters, decides she really needs a smoke. She braves the elements to join the smokers outside as they are gradually banished further and further from the workplace. The images become bleaker and more industrial. The colours fade to grey and ultimately the scene looks like a Soviet era Gulag and she parts company with the last smoker who with Zhivago- like intensity and quivering moustache, still insists that the revolution must go on.

Not that I am proud of being a smoker. I have spent vast amounts of money trying to quit, but for the moment I am still stuck with it. I don't smoke in the house either and with the weather taking that First Day of Autumn business really seriously - we've already had snow on the mountain at least once and it's probably there again today, if only I could see it, smoking has been a necessary ordeal rather than a pleasure.

Hope the people in Christchurch who were affected by the earthquake have found shelter and soon get their power back on. They are two degrees closer to the South Pole than we are.
Email Post