The Closing Commons and the End of Childhood

I was talking with my daughter about her memories of her alternative childhood. The funny part was that she didn't think it was particularly alternative since it was just normal at the time and people around us were living much the same way. After a while though she did start to remember somewhat less fondly, things like the long drop toilet and washing being done in a copper over the open fire. However, she also  remembered the freedom - being able to run around with no clothes on or playing with other children at bush dances and then all sleeping together in the corner of the hall or sometimes -Shock! Horror! being put to bed in the van outside.
“I think it’s awful,” she said, “That your generation which had so much freedom is now bolting all the doors for everyone else.”  Although I denied all responsiblity for the changes, I did have to agree that she had a point. 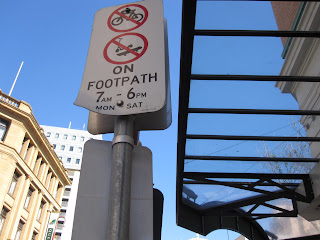 While she is all in favour of the smoking bans everywhere, which I discovered when I went to have a smoke in the Mall the other day, and I am glad I am no longer hopscotching around dog poo in the park, and neither of us are against seat belts, helmets  or the crackdown on drunk driving or even the ban on guns, there are big and little encroachments everywhere.  You could certainly not do what we did in the 70’s – i.e. live in a tent for months while we built our house. The council would be there in a flash to move you along.  When I was thinking about making Christmas wreaths out of pine cones, it said that it was illegal to remove them from national parks. Hey, wild flowers OK!  But pine cones? They aren’t even natives and they are definitely a renewable resource.
It is also illegal to remove seaweed and driftwood from the beach these days, so I will probably never get to make one of those awful macramé wall hangings out of found objects with my grandchildren.  Nor will they ever be able to walk to the corner shop or the park by themselves until they are about twenty years old. The saddest part is that they will probably never want to. Even when there are no formal sanctions, they will have internalised those values.
All sensible things in themselves no doubt and yes, there are fewer risks, but I do worry about children not having a childhood and no possibility of exploring or discovering things for themselves. Where are the wild places where you could run and shout, the dirt piles for mud pies, all those perfect climbing trees and the odd left over building materials to make cubbies? Kids just can’t go out and play anymore.  I also know places where perfect climbing trees have been deliberately removed so as not risk any public liability claims.

All this concern about health and safety and we wonder why we have a crisis of childhood obesity! Sure they won’t get kidnapped or break their arms, but will they all die of premature heart attacks or sheer boredom?
Don’t you love it when you find a writer that expresses what you are vaguely thinking. There’s a great site run by a New York mother and journalist Lenore Skenazy http://freerangekids.wordpress.com/ who created a storm after allowing her 9 year old to ride the subway by himself.

“Children, like chickens, deserve a life outside the cage. The overprotected life is stunting and stifling, not to mention boring for all concerned,” she writes.

Wonder what she would think of the ‘Tiger Mums” who never let their children out of their sight, don’t allow sleep -overs and never let children choose their own free time activities? (Weekend Australian, Jan 22 -23, 2011).
One of the musicians I met in Iceland - admittedly another small, bounded and peaceful place, had a similar take. He said that when his daughter turned twelve he gave her some money and sent her to town by herself so that she would "make it her own” She apparently did and has never looked back, not only taking her chances with all the evil strangers out there but learning to make her own way, her own friends and her own buying decisions.
Heaven knows, and I suspect that this is the real threat to the orderly functioning of society, she may even learn to think for herself and be able to entertain herself without being permanently connected to an MP3 Player or an iPhone.


While my daughter and most of her little friends from those early years seem to have turned their backs on all that hippie stuff  - they did after all have organics, recycling and anti -consumerism rammed down their throats when it wasn't even trendy and it's only natural to rebel against your parents, I am looking forward to subverting the next generation at every opportunity.