I thought my sister might enjoy looking at Hobart from a different perspective, so after dragging her through the back streets past a couple of my favourite shops, we descended down into the Hobart Rivulet. I think of it as the sewers of Paris without the rats. Most people never get to see this part of Hobart and I suspect that my sister now wishes she were among them.
The Rivulet has a long history, having been the site of much industrial activity, providing both water and  power to drive mills and machinery, not to mention being the main sewer and the source of typhoid for much its early life, before being largely paved over and cleaned up.


The interesting thing about Hobart is that its history is so plainly visible wherever you go. First seaport and convict outstation, then the transition to self -supporting colony and exporter of primary produce to the motherland. The Gothic -looking Cascade brewery dates from this period, along with some of the old factories and grand buildings. Finally, there is the shift to tertiary services such as tourism and being the administrative capital of the state, with many of the old industrial buildings becoming offices and shops. One of the reasons Hobart still has so many of its old buildings is that the economy being what it is, it was never afflicted with that crass development boom of the 1960’s that led to their mass demolition and replacement with skyscrapers of concrete and glass as in other cities, although we do have a few of those too. Come and see it all here, before it disappears.
We dropped over the side of the wall near the hospital and two things surprised me almost immediately. Someone had installed lights in the darkest places since my last visit so we didn’t have to rely on my feeble torch, but the roof had also been extended and you couldn’t see some of the landmark buildings anymore. Luckily, the Rivulet wasn’t running too high and without the dark right hand turn at the beginning where you used to have to grope your way along a rusty rail, the only tricky bits were the little weir and the odd bit of slippery slime where a pipe or two leaked over the track. Although the graffiti was as good as ever, the Rivulet generally looked much tidier with no homeless people or buskers to be seen or heard, thereby depriving it of much of its life and vitality. However, it wasn't as creepy as it used to be either, though there were still a few pungent smells. 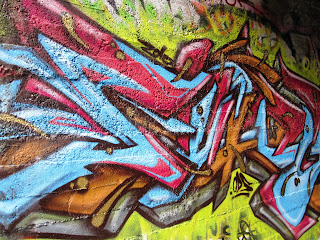 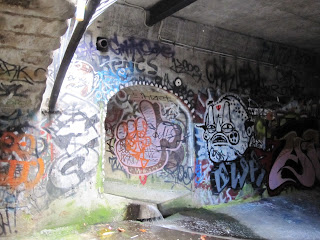 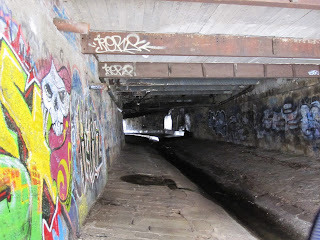 Alas, when we got to the other end, we found out the reason. There was a triple padlock on the exit and there was absolutely no other way out apart from walking all the way back.  I had hoped we would have time to walk the open parts of the Rivulet past the Convict Female Factory and the fudge makers and all the way to the Cascade Brewery. This is a lovely linear park with huge old trees, overhanging blackberries and tables and seats where the Scrabble Club meets, but by the time we had walked back under and through town, my sister wasn’t all that enthusiastic. Don't tell her this, but after what was effectively four laps of the city, I wasn't too enthusiastic either and could barely make it back home.