Tuesday -Down the Channel 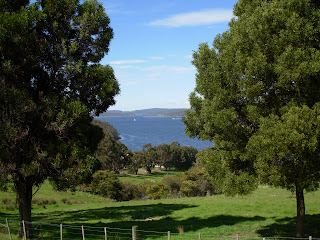 The Channel, or more properly, the D' Entrecasteaux Channel, is a lovely region about 40 Km south east of Hobart. You can get there much faster by taking the Southern Outlet but you miss the beautiful cliff top views of the Derwent that you get by taking the old windy road through Taroona, past the Shot Tower and over Bonnet Hill.  The other way to get there if you have time and don't have a tight budget, is by taking the Peppermint Bay Ferry from Elizabeth Pier. Slower still and with unlimited waterviews.


Even by road there are excellent waterviews most of the way and you see rustic little places like Margate, Snug and Kettering which all have excellent seafood. Not that I am much of a fan, but others positively rave about it and I did like the chips. Kettering has a delightful harbour where many small craft lie at anchor and it is also where you catch the ferry to Bruny Island. Bruny Island is an interesting place to spend a day or two, especially if you like lighthouses and birdlife. Even Captain Cook stopped by there.

I was a bit disappointed to find that the old pine trees at the pub in Kettering which had the Alice in Wonderland sculptures, had  now been cut down. The sculptures do live on, but safely corralled inside the beer garden, which is not quite the same.  However, you can now see the pub from the road not just the sea, which you couldn't before.

The main activity here besides fishing, used be apple growing, but after Britain joined the Common Market in the 1970's farmers were encouraged to chop down their apple trees and diversify. Tourism has taken off, along with small enterprises such as alpaca farming, an all sheep cheesery, wine growing, Atlantic salmon farming and a variety of art and craft galleries. 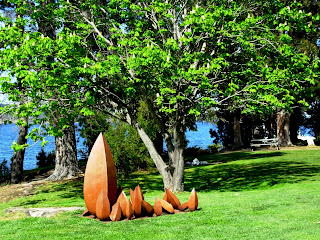 Mostly though I just like the little village of Woodbridge. Not sure why. It has been down on its luck a bit in recent years as evidenced by the peeling paint, but perhaps it' s the sense of community and the setting with its rolling hills, modest buildings and established trees. Maybe it's just the scale. This number plate must date from when Tassie was still the Apple Isle.
Be tempted indeed!
It wasn't till we got to about here that my sister realised that I had brought her down this way before – I didn’t remember either - but it was still a lovely drive and the changing colours of early autumn were a delight which I never get tired of, so I am hoping she didn't mind either. I felt a bit sad though as we left.

Noble though the proposed Carbon Tax might be in principle, I can't help thinking that it will just be another nail in the coffin of small communities like this. We do not need another tax. The rising petrol price is doing the job of cutting my emissions quite nicely. I hardly go anywhere already.
Email Post