Sunday - A Day at the Fair

Somewhere in our travels my sister noticed that there was going to be a Village Fair in Richmond, one of Tasmania's oldest towns.
Heritage listed Richmond is only twenty four kilometres from Hobart. Its lovely sandstone buildings and convict- built bridge, cobbled streets, maze and model village make it a pleasure to visit at any time, but the old fashioned village fair bustling with visitors, stilt walkers, sweet stalls, craft and garden displays while the band played, added an extra dimension. After sampling fudge and eating hamburgers we wandered around its charming shops and galleries, had  a sinful iced coffee in one of the little cafes and visited a garage sale  and a paddock sale – very similar, but much bigger, and then took a leisurely route back through the Coal Valley Wine district and South Arm.
The latter was a bit of an accident as I took a wrong turn at Cambridge (forgot to take my GPS), but it was not without its rewards. Apart from spectacular views of the Channel we got a great haul of wild fruit – apples, a few quinces, rosehips and a whole shopping bag of wild pears. 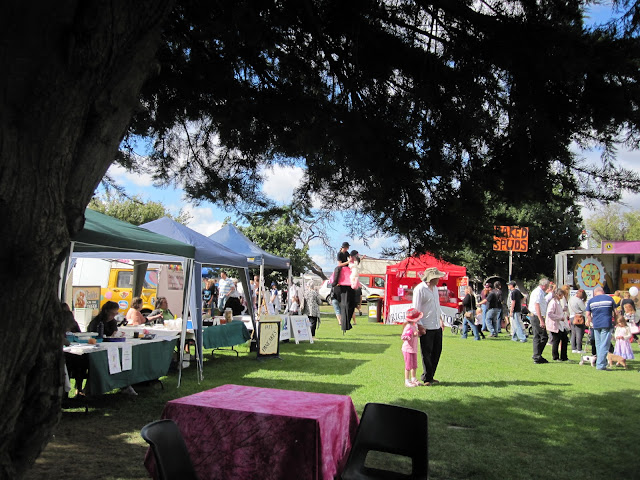 At the Fairground. If you look carefully you'll see the stiltwalker riding a pink flamingo
My sister likes hunting and gathering even more than I do, but having fond memories of Greece, she still  wanted to see the Greek Festival too. By the time we got to North Hobart it was almost over and most of the food had gone, but there was still a bit of Greek dancing and music and we managed to get a slice of Spanakopita (Greek spinach pie) as well.  We were both surprised at just how enormous the Greek community in Hobart was although North Hobart is the most multicultural place in Hobart with every kind of restaurant you can imagine. It also has galleries, quaint cottages, the best op shops and the oldest cinema in Australia so we spent a little time walking its streets and soaking up the atmosphere.

I was a bit exhausted by this time and didn't take many photos, but next time I'm down in North Hobart I'll  take some of the State Cinema and some of the other buildings and add them here.

cluan said…
Wow it sounds like you guys had a great time together!

Veronika Wild said…
Yep! Just as well my sister wasn't feeling better, or I would have been more exhausted than I feel already!
8/4/11 11:22