Saturday -Down on the Waterfront

I know I promised you pictures of Tasmania, but my sister wasn't feeling that well, so we stayed a bit closer to home. It was just as well we didn't go to the East Coast, one of the places where I wanted to go, because it rained so much there (rare!) that there was flash flooding. There were also 120 Kmph winds  and many of the roads were closed. On the first day we did a bit of impromptu blackberrying in the neighbourhood and discovered a fairy forest I had never noticed before. On Friday it was Mona and on Saturday we went to the market and then wandered on around the docks and Battery Point.

There was also a bit of Greek dancing on the Parliament House lawns
Big ships still come in here, cruise boats too, and it's the place where the Wooden Boat Festival is held.When the bay is full of square riggers with their sails all unfurled, it's very easy to imagine that you've stepped back a century or two.  You expect to see swaggering sailors and whalers, not tourists with cameras. There's a smell of ozone in the air. It always makes me think of far away places and hungry for fish and chips.


On this side there are lots of seafood places. Some like Flippers are really cheap and others are really expensive. In between, are places like Mures and Fish Frenzy, which are also well known Hobart institutions. It is also the jumping off point for Ferries and Cruises. Dinner Cruises start from around $45. A ferry to Mona is only $15 and would be much nicer than travelling along the busy Brooker Highway. Other places which can be reached from here are Peppermint Bay for a long trip south of the Derwent, or the Chocolate Factory or the Morilla Estate which are only a short distance upriver. A trip across the river in a funny little jelly bean punt costs around $10. 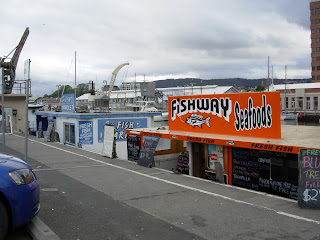 From Salamanca it's only a short hard walk up Kelly's Steps to Battery Point. I had planned to take my sister on the Sculpture Walk there among all the lovely old sea captain's cottages. Alas, I had pretty well worn her out by this time, though she didn't mind the cute little ones at Arthur's Circus. 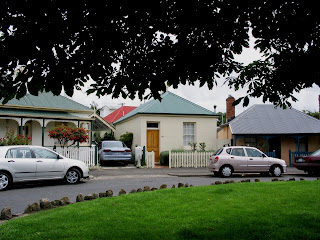