The Shame in Spain

This is one of the dogs a friend tried to save last year. She had gone to Spain to work on her doctoral thesis but found herself totally traumatised and caught  up with rescue work. She asked me afterwards if I knew anyone who could do something about it. Although I contacted a few organisations at the time, nothing much came of it. Yesterday when I was looking for her email address to send her a Valentine's card, I came across this picture that I hadn't noticed before. As I have since had contact with other concerned people and organisations who really are doing something about it, I will pass these on as a matter of urgency.

Perhaps one of the most eloquent and active is Beryl Brennan who worked for BBC regional radio in Manchester and for local radio in Suffolk before retiring to rural France in 2002.  Having acquired her first stray greyhound while still in Suffolk, she has been involved with rescue work in Spain ever since. She has two websites largely devoted to Spain's unique hunting dogs - the galgos and podencos and has recently written a book about the appalling treatment of galgos once the hunt is over. Her sites list many other concerned groups and ways to help, from lobbying local councils directly (their addresses are listed) to close the many "killing stations,"  to how to adopt these dogs abroad. She also currently has a petition going to the European Commission which I would urge all dog lovers and those concerned about the welfare of animals to sign. As Beryl puts it:


“We really have to all expose the vile treatment of animals in Spain, not just dogs but all the animals which are treated as though life has no value. We must all pull together in raising our voices and letting Spain know that their behaviour will not be accepted. It claims it is a part of civilised Europe..............ha! “

Now I am not much of a doggie person these days  - too many committments, concerns about the impact on our wildlife, appalled at the enormous amounts of money being spent on ridiculous things like gourmet pet food, dog treats and diamante collars, when there are so many other issues to get worked up about and it's not as if we don't have abuses in our own backyard - the abattoirs, the live export trade, rodeos, the treatment of factory farm animals and too many people who think animals are on earth for our sport and amusement- but everywhere - in Spain too - there are also many people who believe that it is time for a more ethical approach to our next of kin, whether at home or abroad, especially as there is more and more evidence from science that they are thinking and feeling beings, not just inanimate objects for our consumption and pleasure.

Although the Orca Slavery Case against Seaworld in San Diego was thrown out of Court, it wasn’t that long ago that we thought about humans in the same way. Likewise, we thought it was fun to watch public hangings and dismemberments or the insane being dragged through the streets for the amusement of passersby.  I want to believe that we have collectively moved on from there.

Other Places and Other Animals
We hear similar stories of cruelty in the Philippines, about Greece and China and yes, there is still dog fighting and cockfighting in Bali, dog -eating in Korea, where live dogs are beaten with sticks to make the meat tender, despite this being banned in 1989. There is also still bullfighting in Spain, cows being mistreated in India  for religious purposes, likewise pigs in Vietnam and you can sign petitions about all of these too, but Spain has pretensions of being civilized and part of Europe, so I believe that is a good place to start. Criticising the cultural practices of other countries is always risky and I know we can't stop all forms of abuse, but we can try to stop the worst evils and the more frivolous forms of exploitation. As it says on  the website of  International Aid for Korean Animals:

Farm animals really deserve a separate chapter, but it is good to see McDonalds, "the world's fourth largest employer" responding to public pressure by phasing out the use of eggs from caged hens and the use of pork from crated sows. It is already setting an example to other fast food outlets.


By the time you read this, some petitions will have closed, but there are always others. Just click under "Animals" on the Care2  website and you will find more than enough horror stories to go on with. Other ways to help are as diverse as making jackets for galgos - they really feel the cold, or going to see the Aussie movie Red Dog, by director Nelson Woss. Not only has it had excellent reviews and is a heartwarming story about animals, but proceeds from international premieres go to animal welfare organisations in that country.

If you would like a more meaningful holiday in Spain, you may want to help out with dog rescue of work in  the shelters. Read about it on Beryl Brennan's websites.She is also active on other issues such as bullfighting.
http://www.galgonews.com/2010/05
http://www.podencopost.com
The book: 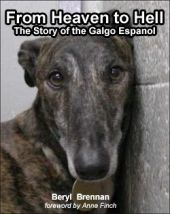