Symphonies in purple and green

Well, life is almost back to normal. The house is clean, the washing is done and the garbage men have been, so I am up bright and early, showered, dressed and fed before 7.15. I just caught the recyclers leaving - I always thought they were the same people as the Garbage Men, but they aren't. They have a lovely painted truck. I'll have to leave out something separate for them this Christmas - wonder if they like Macadamia Shortbreads? - or maybe Easter eggs since they are already in the shops.

They should employ more graffiti artists on jobs like this, better than all that pointless tagging. There are a couple of unseen taggers at work in the neighbourhood and this would be a far better thing for them to do than defacing every freshly painted wall they see. Perhaps it is a desperate form of job application. 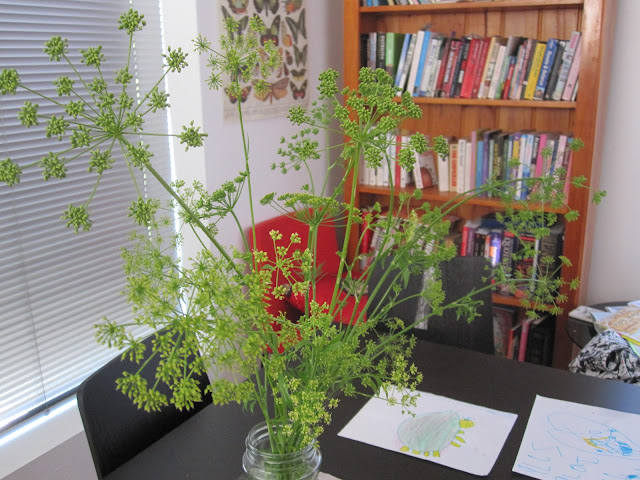 All that 's missing now are the flowers.  It's one of nature's lulls and there are none in the garden or even any (nappable ones) in the street. Only my self -sown parsley is flowering prolifically, so I have brought that in along with a couple of purple heads of chives. I like the look of my bouquet. Have you ever noticed what an intricate design parsley flowers have? Too bad about the smell.


There has been a mysterious -looking van parked outside my house every night since I've been home. It has tinted windows and strange fittings on the roof. After the article about protesters being targeted by spooks, I was starting to think ASIO and wondering whom I had offended lately, but I saw it in the day time today. It looks a lot less sinister in daylight. It  looks a bit worse for wear and  has a pot plant in the front window. The occupants appear to be tourists from WA. Do you suppose they followed me home?
Email Post